After rising above 18 percent for the first time in almost a century, the U.S. unemployment rate has decreased for three consecutive weeks. As of May 16th, approximately 15 percent of the workforce was unemployed.

In California, the estimated weekly unemployment rate declined to 21.7 percent.

Just to be clear, the economic crisis is not over. The unemployment rate is still exceptionally high and there are very plausible scenarios that could cause another contraction. The recovery is virtually guaranteed to be long and arduous.

Little has been done to stem the tide of layoffs, and the problem could get worse as capacity limitations for restaurants, retail stores, and event spaces make it difficult for these businesses to remain profitable, potentially resulting in a wave of business closures and more layoffs. These business closures would be permanent, creating permanent job loss.

There could also be another round of reductions in consumer spending due to fear and/or the increase in precautionary saving until the coast is clear.

Furthermore, we might see an acceleration in layoffs at state and local governments that have been devastated by the lack of sales tax, hotel tax, and other revenue for the last 60 days.

We will discuss these scenarios in future updates, but it is important to be aware that the labor market contraction has reversed for now.

The unemployment rate peaked in late April and began to improve in the first week of May.

Is this the beginning of the end for the labor market crisis? Will the re-hiring process accelerate from here? That is still a large unknown, but right now the evidence does suggest that the labor market is better today than it was yesterday.

Continuing claims for unemployment benefits are now declining for both the U.S. and California. Perhaps the Paycheck Protection Program is working to re-employ workers who were laid off in March and April. The construction industry has also returned to work here in California and a number of counties have been given the ok to “open up.”

Homebuyers are applying for more mortgage loans and more sellers are putting their properties on the market. Restaurant bookings are up and foot traffic is returning to retail stores. Hotel occupancy rates are improving and air traffic is rebounding ever so slightly.

At this point, evidence of a business cycle turning point is becoming more convincing. There is still great uncertainty about the dynamics of the recovery, and there is concern that the rebound will be meager and/or short lived if virus infections begin to turn up again or business failures intensify. But it’s now clear that the recovery has started because a myriad of indicators have begun to turn positive.

Weekly Unemployment Rate Ticks Up Slightly in the U.S. and California 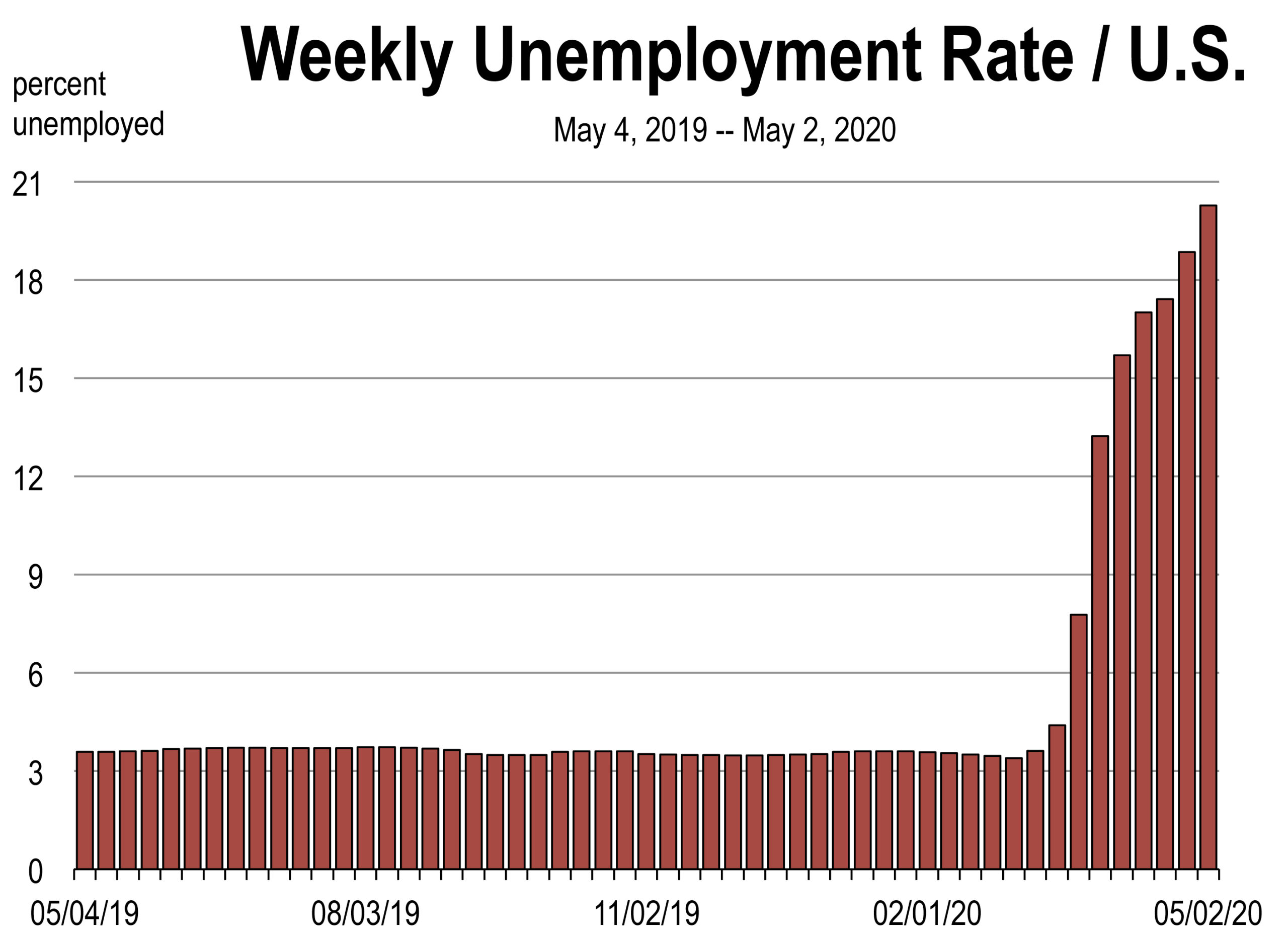 A few days ago we speculated that the recession would end soon and the unemployment rate would begin to decline within the next few weeks.

There is mounting evidence to support this prediction, and there is new data showing that certain sectors have likely bottomed. But this recession is all about jobs, and for the week that ended May 2nd, the unemployment rate continued to increase very slowly.

There are a myriad of reasons why the unemployment rate continues to rise despite the fact that 1) nearly half of all states have eased their lockdowns and permitted some business to partially open, and 2) $349 billion in Paycheck Protection loans have been issued to small business.

There is some evidence that PPP funding has been used to rehire workers that had been laid off. Research by Harvard and Brown economists shows that small business employment began to rebound during the week of April 20th, shortly after the first round of loans was disbursed and before the lockdowns began to be lifted. 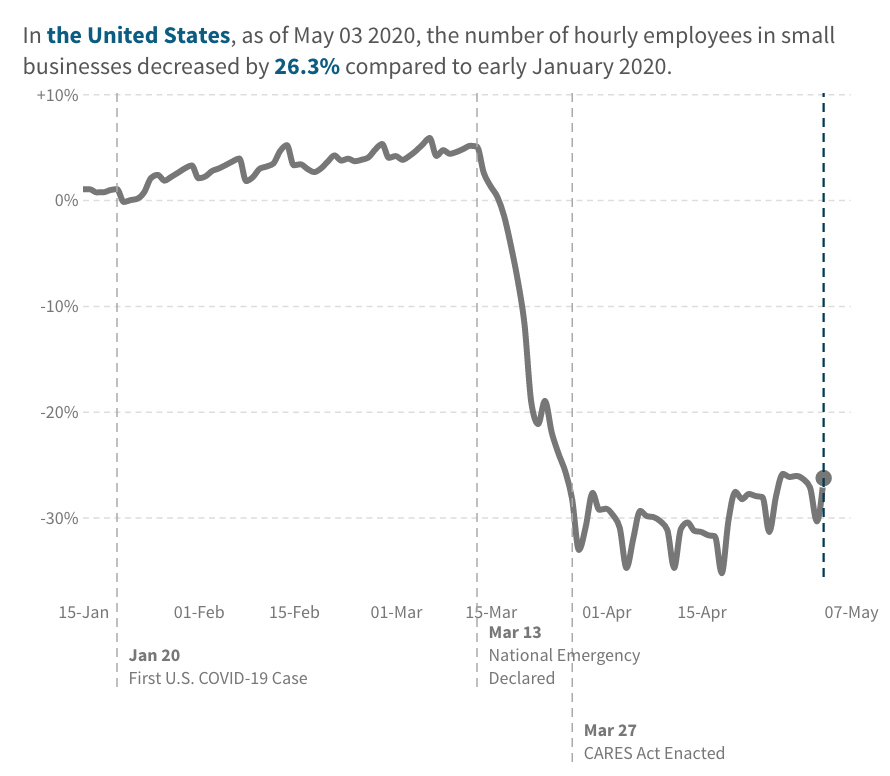 But the rebound in small business employment has been minimal, and large corporations continue to issue layoffs. Just within the last few days, layoffs and furloughs were announced at:

More than 20 states have started to ease their lockdowns, but the re-openings are unfolding very slowly, meaning that there is not enough work to warrant rehiring many employees. At least not yet.

So far only limited categories of retail shops have re-opened and dine-in restaurants have been required to severely reduce their seating capacity. A wider range of medical procedures is now being allowed, but hospital waiting rooms are still pretty empty. Some type of manufacturing activities have resumed, but not for big-ticket items like cars and airplanes.

This recession is primarily the result of supply-side constraints, with government mandates preventing businesses from supplying their goods and services to the economy. But the massive number of job losses have reduced consumer demand, and the uncertainty about job security will limit spending even after the lockdowns are lifted. As industries are slowly unfrozen, these demand-side limitations will probably lead to a recovery that is both slow and bumpy.

Consumer spending is now moving higher, but not by a large enough amount to influence the unemployment rate yet. Many restaurants and consumer goods firms still have skeleton staffing levels, and have been able to partially reopen without re-hiring former employees. 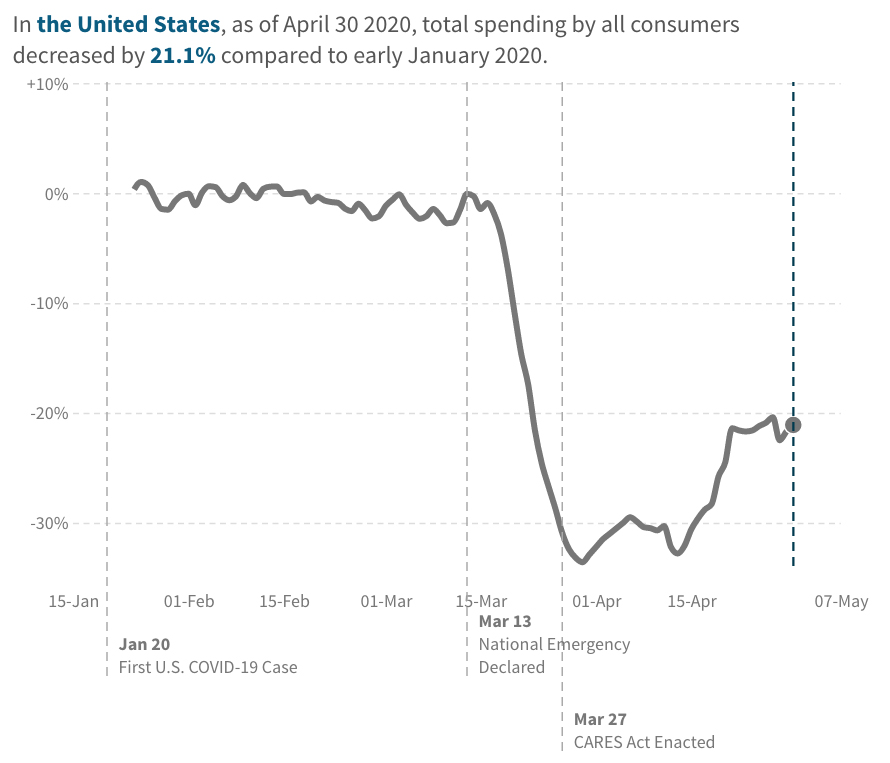 Chris B. Johnson
Contact me with any questions!
(805) 208-0823
Cell
ChrisBJohnsonRealtor@gmail.com
E-mail

Should You Live in a Multigenerational Home?

How Will the Economic Recovery Start?

Chris, we all have been worried about the unemployment rate, and glad to see yours is improving, ours is not.

Chris B Johnson REALTOR® this is great news that the California unemployment rate improving.