Killing the Shadows (2000) is a standalone novel featuring Professor Fiona Cameron, an academic psychologist who uses computer technology to track serial offenders by international award winning Scottish crime writer Val McDermid. I enjoyed this book and recommend it for your reading list. Click on the links to learn more about the author and her books.

Synopsis:
A killer is on the loose, blurring the line between fact and fiction. His prey – the writers of crime novels who have turned psychological profilers into the heroes of the nineties. But this killer is like no other. His bloodlust shatters all the conventional wisdom surrounding the motives and mechanics of how serial killers operate. And for one woman, the desperate hunt to uncover his identity becomes a matter of life and death.

Professor Fiona Cameron is an academic psychologist who uses computer technology to help police forces track serial offenders. She used to help the Met, but vowed never to work for them again after they went against her advice and badly screwed up an investigation as a consequence. Still smarting from the experience, she’s working a case in Toledo when her lover, thriller writer Kit Martin, tells her a fellow crime novelist has been murdered. It’s not her case, but Fiona can’t help taking an interest. Which is just as well, because before too long the killer strikes again. And again. And Fiona is caught up in a race against time, not only to save a life, but to bring herself redemption, both personal and professional.

Rich in atmosphere, Killing the Shadows uses the backdrops of city and country to create an air of threatening menace, culminating in a tense confrontation between hunter and hunted, a confrontation that can have only one outcome.

Goodreads Review of Killing in the Shadows 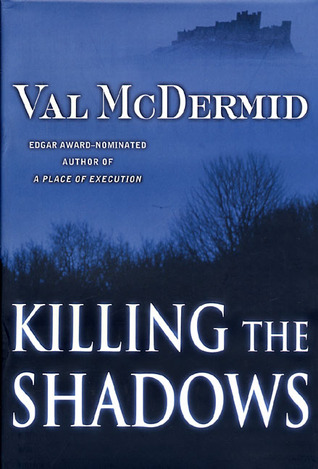 This blog was not posted at the scheduled time. ActiveRain needs to address this technical issue.

Good morning Roy. Just finished a book, The Innocent, by David Baldacci and beginning another one. Enjoy your day!

Killing the Shadows sounds like a great crime read for the bookworms out there, Roy!

I think I have read other books by Val McDermid.  I am listening to Camino Island by John Grisham right now - and thinking about starting a Brad Meltzer book as a read - I am also trying to get through The Witches but I can only manage about 10 pages a night - it is the Salem Witch Trials - very slow going

You have mentioned this author, Val McDermid before.  This synopsis of the book sounds very exciting and intriguing.  Happy Wednesday.  A