Elizabeth Schuyler was born in Albany, New York back in 1757 to Philip and Catherine.  Her mother taught her to read and sew.  It is said she was somewhat of a tomboy growing up.  she accompanied her father one to the meeting of the Six Nations.  Once Benjamin Franklin visited the family while he was traveling.

In 1780, she went to her aunt’s home in Morristown, New Jersey where she met Alex.  The attraction was immediate.  In December of that year they were married.  In January of 1781, Alex was off to serve in the military.  All in all, the union produced eight children, the last one born in 1802.  Alex died in 1804, she never remarried.  After his death, she defended him against his critics including James Monroe.  His works and writings can be found at the Library of Congress.  In her final she helped Dolly Madison and Louisa Adams raise money for the Washington Monument.

Good morning, James Dray the Elizabeth Schuyler Hamilton from the Musical, Hamilton, is much more attractive than the "real" Elizabeth!!! 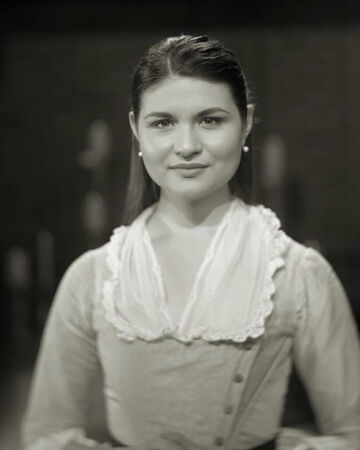 I was just thinking what a pretty woman Barbara posted then read her comment. Politics it seems has always been dirty, money and power corrupt, and those who seek it often are willing to berate others mercilessly for their own ends.

Good morning James. The country she knew is no more. Bet she is rolling over in her grave if it has not been vandalized in the name of justice. Enjoy your day!

Hamilton, I have read a lot about and not much of his wife.

Well you got me on her maiden name but knew of her after she got married.

Good morning, James... that is certainly a ripe old age for those times. I had no idea about Alexander Hamilton's family... but now I do.

Good morning James - I haven't seen Hamilton like Barbara.  So I wouldn't know that.

I tell people that I am in a history class since I read your blog posts each and every day.

Who knew?  You did!  Eight children is a lot to bear.  Wishing you a great day and hopefully you are golfing too.  A

She was one of our all-time great Americans. I did know this story and an amazing one it is!

Thank you very much, James, for sharing this interesting history lesson.

Hello James - your posts often bring forth information I didn't previously know or had forgotten.  When that combines with the comments left by others, there is often additional insight gained.

Hi James- We all know of Alexander Hamilton but loved learning about his widow.

Well, this was all news to me but a fun read. And of course I know Alexander Hamilton.

It is truly sad that we don't very often hear about the woman behind the man...

I hope you're having a great weekend James Dray

It's always fun to learn about people who were important behind the scene. Thank you for this one James Dray