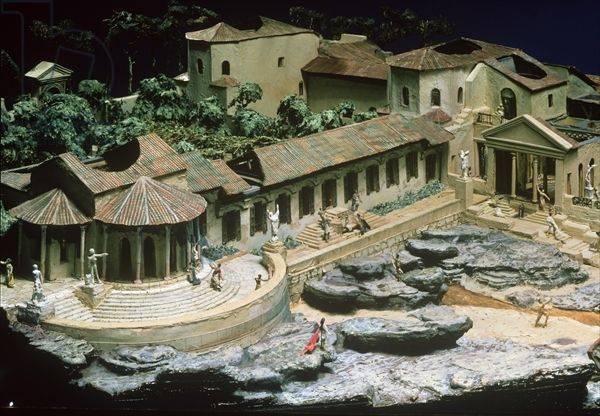 A famous Roman philosopher had a beautiful villa built high on a hill, overlooking the Mediterranean Sea, many hundreds of feet below.  He and his wife loved the new abode which seemed to give them everything they desired: privacy, the ability to think and write, an inspiring view and perfect weather.  He was able to get away from people, even his relatives and friends.  The air was crisp, the breeze was fortifying, he was busy with several building projects on his land.

Finally, after several months he called on a relative of his to come visit.  This was not an easy thing to do as the house was very high on a crag and there was no real road built.  His nephew finally managed to make it one day and as he was shown the astounding vista and the several outdoor gazebos and irrigation projects, he finally sat down and asked this of his father's eldest brother:
"Uncle, weren't there lovely strands of cypress up here when you started?"

-- "Yes, there were, but the winter has been unusually cold and we had to cut down many of them..."

"Uncle, do you go down to the sea that you loved so much and fish as you once taught me ?"

-- "No, it is too much of a climb up and down and although I do miss the sea there is so much here that keeps me busy.  I write much now and need the solace to concentrate.  Aren't the views amazing, nephew?  Unfortunately, I cannot pay the fishermen below enough to bring up the daily catch."

The nephew thought again... "Uncle, do any of your brothers and sisters come to visit; have you seen my father and mother?"  He looked at his aunt, who had tears welling in her eyes.

-- "Well, as you see it is a difficult climb so I rarely see anyone at all.  Of course, they are invited to come."

"Don't you miss the figs in the valley below and your beloved mutton?"

--  Wistfully, the philospher answered, "Ah, these things are not as important to me anymore.  Sheep don't graze up here -- there is no grass -- and the fig will not live in this barren soil.  But, I can gaze for hours at the sun's glancing rays of light on the sea while I sit in this hammock and ponder.  Look, you can see Vesuvius from here and you know any day it will erupt and kill all those below!"

"Uncle, don't you miss the conversations in the agora in the town in which you grew up and loved so much?"

The color, completely gone from his face, the philosopher replied-- "Those people must be forgotten and I have made up my mind on many things of which I am sure of now.  Nothing can sway my thinking.  I don't need them anymore.  And that valley town was so humid in the summer that my tunic would just stick to me!"

Finally, the nephew by now flustered at his uncle's complete disregard for all his family, his selfish attitude, and the lack of interest of the things he knew made his life worth living months before he took this ascetic stance -- blurted out: "Vos can visum ungulam non dividit!"  Translated roughly, that meant: "You can't chew the view!"

We often look at the candy shining brightly when shopping for a new house, and it always seems about me, me, me.  In the thrill of the chase, we often forget a few salient facts that define who we are and how we got to this point.  We also push away practical and perhaps some ethical and moral issues that seem convenient to forget or ignore.  After all: 'this is my Dream Home!'

Well, how far away from civilization are you?

The land may be less expensive and the views amazing, but if it takes hours to come and go in order to buy 'provisions', see a recent movie, go to a nice restaurant, leave your car for a few hours at a garage and go shopping for fun in the meanwhile, enjoy a theatrical event, etc. then maybe you should think twice about what you are about to get into.

So, you visited the 'perfect' location and site during the best time of the year. Did you know it was going to rain on and off for 9 months and that the electricity in your area was so expensive that you were going to be stoking a fire for 9 months?
How about the fact that those beautiful parks and nature trails around you are closed 6 months of the year?
Do you mind having spotty internet and only a few channels from which to choose?

Did you realize that the nearest hospital is a two-hour drive from you?
Did you know there was a raging torrent of water gushing over your access to the main road when it rained persistently?
Did you think you were going to wear long johns 7 months of the year during the dreary and cold winter that extended into May?

Did you think you were going to have to develop a list of things to do every week because it takes forever to just run a few errands?

What about the locusts that are about to swarm and the mites, chiggers, flies, spiders, and mosquitos during the three months that are the 'good months'?

During these 'good months', did you think the roads and few venues nearby, the parks and lakes, would be swamped with tourists and heavy traffic?

Your aging parents used to be 15 minutes away.  Now, due to disabilities, they cannot drive the 10 hours it will take to see you.

You keep sending us photos of the beautiful sunsets and forested views across the valley.

Guess what: you can't chew the view!

The first story about the philosopher was very loosely based on the Roman legislator and writer, Pliny the Younger.  He had several estates, one of which was named 'Tragedy' as it was built high on a hill overlooking Lake Como.  In an essay on the development of villas, Vanessa Sellers writes: "His descriptions constructed images of the general appearance of the villas and unfolded the experience with intertwined interior and exterior architectural features. Pliny’s retreats slipped into the landscape with terraced gardens and opened outward to natural surroundings through colonnades, or loggias, which replaced solid enclosing walls. The author retired to the gardens, or horti, to appreciate the abundance of

flora and fauna. The cultural life of poetry, art, and letters unfurled in a setting that was distinctly different from the urban experience of Rome."
The second story is a very true one, based on our sister and brother in law's move to a remote location in the beautiful hills of western N.C.
LIKE
3
close

Tags:
what you see may not be what you eventually get

A great narrative indeed! Thanks for sharing!

We often look at the candy shining brightly when shopping for a new house, and it always seems about me, me, me.  In the thrill of the chase, we often forget a few salient facts that define who we are and how we got to this point.  We also push away practical and perhaps some ethical and moral issues that seem convenient to forget or ignore.

Good morning John. In normal times so true. In these times maybe the safety is worth the sacrifice. Enjoy your day!

I'm guessing you don't get to see your sister and brother-in-law as much as you used to!

These are all excellent questions home owners should ask themselves. We asked ourselves many of them when we were picking property in Montana for our new home. As a result, we are only 12 minutes from the center of town, we have very good cell service, and we're only 30 minutes from the airport so visits are certainly doable.

What we did NOT know is that the road that we live off can get really treacherous in the winter and potholey in the spring, so the 12 minutes to town can become 20-25. We also did not know that internet options were limited. Luckily we were able to purchase a custom solution that beams 50Mbps from a nearby tower. It is a pricy solution but at least it works.

Every buyer of property should take your list of questions with them!

Hello John - it's about the entire meal, not just dessert or some part, isn't it?   As for pondering, it can be done anywhere and anytime.  And by anyone if one chooses.

Hello Michael Jacobs   Yes, one can ponder anywhere.  The funny thing about spectacular views are... you actually can get bored with them!  And then what??

You just can't eat dessert alone...  Thanks, as always!

Hello Kat Palmiotti   We just had a visit by the inlaws and I think they missed all the conveniences of living 'close in'.  So many.  But if you are close to a town and can enjoy the beauty of nature, fabulous.  Some of the small things can be overlooked.  But one has to wonder when so many setbacks mar the 'perfect' house or location.  Thank you very much!

Hello Wayne Martin   I have been told that vacation houses are rising in price in all the way out places.  I am not sure that it may be a two-edged sword.  Those who are coming are from the 'hot spots'.  We shall see!  Thank you for your comment

Hi Sham Reddy CRS  There is a lot of vetting to be done if you decide to move to a place that is completely out of your normal 'comfort zone', isn't it?  Thank you

Sometimes the things we dream about is not so important, once we get there.  Sometimes the view from the top is not worth the journey

I have been to places in Europe and Mexico and Hawaii where I think that I could live happily. Yet, I am in the same home that I bought in 1976. There would have to be a major and valid reason to make a move.

Hello James Dray   The dream and the journey is worth more than the ultimate end.  But one should dream a worthwhile dream!  Thx

Hello John Juarez  I think we all imagine ourselves in a foreign land to retire or work.  I grew up overseas in Turkey and it seemed totally natural.  The world has changed over the last thirty years and things are more complicated.  I hear of expats living in Portugal and Spain or Italy and France.  There are some good stories and some bad.  Home is where the heart is.

It seems that the fastasy is always better than the reality, unless you really work at it to make the reality become ever better than what you had imagined.

Aug 12, 2020 01:23 PM
LIKE
#9
You must sign in or register to leave a comment
Login Register
Show All Comments
Older Post Newer Post
Back to Top
Generate More Leads from this Listing
With a Trulia Pro Account
Learn More
Find what you need?
See More Blog PostsAbout Real Estate! SEE MORE NOW!
Rainmaker
247,427