Tokuji Hayakawa was born in Tokyo, Japan back in 1893.  He was adopted, where he left primary school after the second grade to his family’s poverty.  He found work as a maker of metallic ornaments to help the family survive.  He died in Tokyo in 1980, he was 86.

What you may not know about Tokuji is that he was an inventor also.  He invented the “Tokubijō.”  It was a belt buckle that used rollers to fasten a belt without puncturing it.  His first order was the 4,752 buckles.  He opened his own foundry the Hayakawa Kinzoku Kōgyō making the buckle.  In 1915, he invented the “Ever Ready Sharp” mechanical pencil, hence the name of his company changed to the Sharp Corporation.  Interesting on how corporations, companies get their name isn’t it? 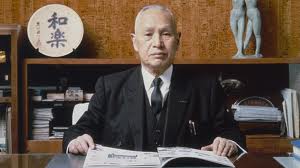 thanks for the research!!

It had to beat walking to the basement for the pencil sharpener!

Well there is no boundaries for the human imagination. Stay safe and enjoy the 4th.

Hello James - thank you for the information on Mr Hayakawa.  He definitely seems like a person who was both ready as well as sharp.  In many ways.

Happy 4th of July James and thanks for another great history lesson for us here in the rain.

Happy 4th James to you and family. Interesting story.

Wow, pretty amazing story, and he lived to the ripe old age of 86 :)

Had no idea about Sharp and how it came about loved it,  Hope you had a fantastic Fourth of July James!

This style of pencil is very popular in our home with two artists in the family James Dray . As far as the belt buckle... I have had horrible luck with it.

Hi James Dray,  from my years at the University of Hawaii, Manoa, I was so fortunate to have many Japanese friends.  I found this story today very interesting.  Seems  TOKUJI  HAYA KAWA  had a motivated and strong inner drive.

Speaking of names, I like the rhythm in the Japanese name.  For instance, two of my friends had the following last names:
YOSHI MOTO     and     YAMA SAKI.

I thought I also read, someplace, that he was the inventor of the ball point pen along with the Sharp dynasty...

We learn something new everyday. Thank you for sharing... fun facts help to break the ice sometimes... Have a great day.

So I guess it is safe to say that Tokuji  was a Sharp guy who really buckled down?

Such a simple thing...a belt with a roller that allows the belt to fit people of various waist measurement...and without making holes in the belt. So simple and, yet, pure genius!

That was pretty interesting. The mechanical pencil alone was an achievement, and who hasn't heard of Sharp? Rather intriguing how he go from the belt buckle to the pencil!