George Dewey Hay was born in Attica, Indiana back in 1895.  I don’t have any information prior to WWI, but after the war was over he was in Memphis, Tennessee working a WMC-AM radio.  January of 1923, he was a late-night announcer at the station.  By 1924 his popularity increased and he for WLS-AM in Chicago, Illinois where he served as the announcer for the National Barn Dance program.

What you may not know about George is that he was the founder of the original Grand Ole Opry in 1925.  I know this one is short, but that’s all I have. 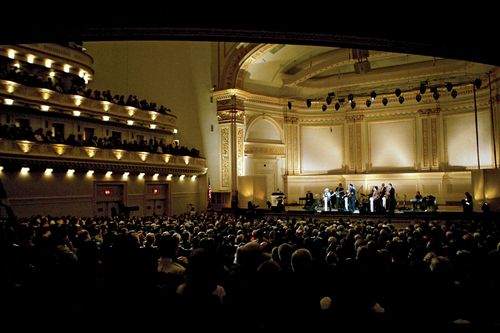 He made a lot of people happy!

this has been on my bucket list to make a visit there, won't happen in 2020.

Hi James Dray - It is time I recognize Barbara Todaro for that extra added icing on the cake. I really appreciate her giving us additional context to all the good information you provide on the legacy of so many individuals.

I knew about the Grand Old Opry, but I did not who started it...What a legacy to have, thank you for letting us know, and thanks to Barbara Todaro who adds the photos.  A

James Dray I remember listening to WLS (conditions permitting) back in the late 60's and early 70's. The evening program had bands that our local (Fargo ND) didn't play. WLS is where I first heard Black Oak Arkansas.

Hello James - short and sweet is sometimes the "right" choice and the "ideal" size.  Thanks for the information.

Hello James,  Lots of people go there to this day, I quess it has been around longer then I figure.

Good morning James Dray - my daughter Ashley has gone many times to Nashville for Opry time.

Hey, although I am not a country music fan, this is one of the great venues in the world!

Hi James, Thanks for sharing the story of George Dewey Hay.  The joy of bringing music to so many appreciative audiences.

Hi James- I too am familiar with the Grand Ole Opry but did not know any of the background.

James I love the Grand Ole Opry but had no idea that he was involved with the creation of it, great trivia, now if  Wayne Martin  used this in one of his quizzes I would get it right:)Enere

Good morning James. No clue about George, but maybe on of these days my questions will be centered on your former posts to see if Endre Barath, Jr. gets them all right. Enjoy your day!

No worries on this blog post being short. You always perform at the highest levels and I appreciate your history lessons...

I hope you had a great Fourth of July James Dray

Even after his death, George Dewey Hay continues to entertain many folks across the nation and visitors to Nashville to see the Grand Ole Opry.

I've certainly heard of the Grand Ole Opry but knew nothing about the history. Interestng story, even if on the shorter side!

He passed on his passion to others. I would say that is a life well-lived.