Heller László was born in Nagyvárad, Hungary back in 1907.  He received his mechanical engineering degree in 1931 from the Elgenössische Technische Hochschule in Zrichū.  He organized the Department of Energetics at the Budapest University of Technology and Economics, where he worked as a professor.

What you may not know about Heller is that he was also an inventor.  In the 1940’s the first high-pressure industrial power station was built according to his plans.  He invented the Indirect Dry Cooling System, which condense the vacuum steam using an injection of cool water.  Using that invention allowed the water to go through a fine-grilled heat exchanger, which cools down the water allowing is to be reused.  That system is still in use and is used all over the world. 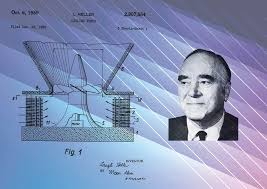 Good morning James Dray -  I am sure that many people are grateful for this invention.

Good morning James. Again who knew about this cool dude! Had to say it! Enjoy your day.

Good morning, James... not sure I really understand how this works, but I do understand that it's an important invention. Happy Friday!

That's all pretty much over my head James Dray but Wayne Martin had the perfect response to your post.

Hello James,  Another great inventor that had a idea and acted on it.  Thanks for the information.

Well, now I know that, but I doubt I will remember his name, haha.  I hope you have a fun day!

Is that kind of a swamp cooler...like the ones used in many older homes in Denver?

Based on the name, I knew he was from Hungary/. The rest of the story was really good too, and what a great invention.  A

Hi James- I am in awe of anyone who can invent machines and things that we continue to use!!!

Hello James - beyond some obvious names, many(if not most) inventors are not known by me.  Maybe Endre Barath, Jr. has heard of this gentleman.

Hi James Dray - This is way above my pay grade!

James Dray  I wish I could ask my father ...... I am confident he would have known him or about him... like Michael Jacobs  I never heard of him... the name I knew right away was a Hungarian name though:))Endre

Hi James,  Thank you for sharing another piece of the history puzzle.  What a great invention - being used world wide. Making the lives of others easier.

What Heller László accomplished is beyond my understanding. I guess that is why I pursued a business major and not engineering in college.

Every time I read one of James' excellent posts, I feel very small...