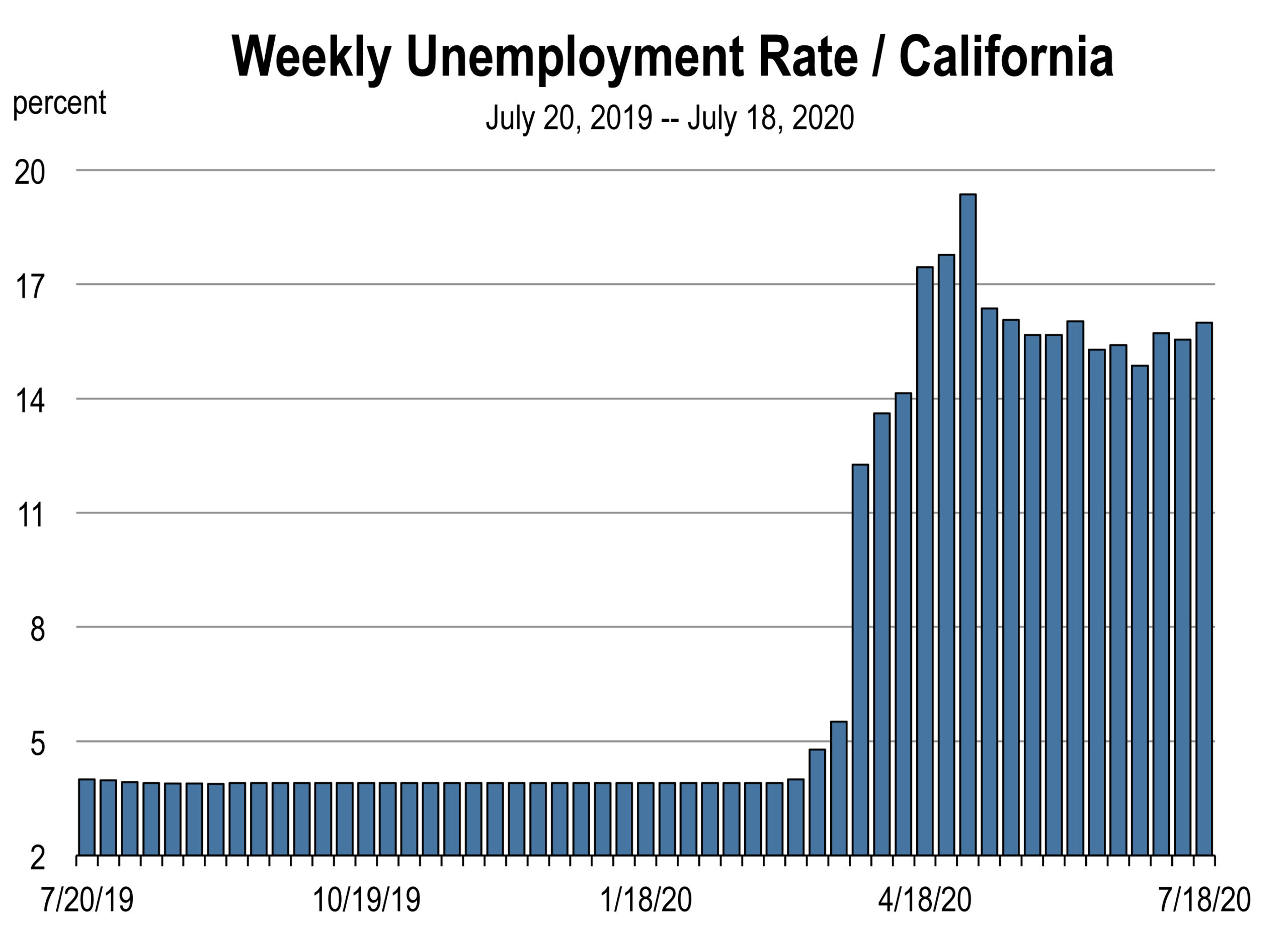 The weekly unemployment rate for California continues to push higher after initial claims for unemployment benefits by wage and salary workers rose by 8,000 in the week ending July 18, 2020.

There are now 5.4 million workers drawing unemployment insurance benefits in California, an increase of nearly 500,000 from the previous week. Most of this increase was observed in the Pandemic Unemployment Assistance claims filed by non W-2 workers (self employed and contractors).

The unemployment rate is now at the highest level since the economy reopened in mid-May. The recent shutdown of indoor restaurants, gyms, museums, and personal services has contributed to rising claims.

The national unemployment rate for the week ending July 18 remained constant at 12.6 percent. There are 31.9 million workers now either receiving unemployment insurance or who have just filed for benefits. In the latest report, fewer non W-2 workers are receiving benefits as the greater U.S. economy struggles to improve. However, it is dragged down by the reversal of many state reopening plans including California.

The index of leading indicators improved in June, rising 2 percent. The increase was the result of diminishing claims for unemployment during the month and a rising stock market.

Existing home sales rose 21 percent in June, rebounding sharply from the month of May when sales declined 10 percent.

Consumer sentiment declined this month, probably due to the pauses and reversals in the reopenings of state economies throughout the nation. The twice a month survey by the University of Michigan indicates that consumers have soured on how they expect economic conditions to evolve this year. COVID-19 remains a wildcard for how the economy will create meaningful opportunities for jobs, income growth, and activities for spending.

On July 13, The Governor ordered the closure of bars, movie theaters, museums and all indoor operating restaurants in California. Indoor places of worship, fitness centers, hair salons, barbershops, malls, casinos and zoos were also ordered to shut down in 30 counties which represent 90 percent of the population. 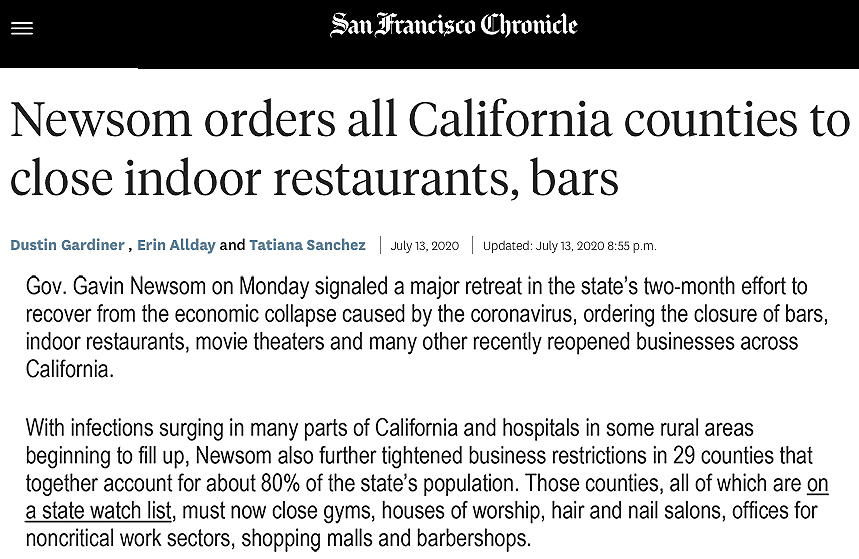 This is in response to generally rising daily COVID-19 cases throughout the state since Memorial Day.

The new order reverses California’s opening of commerce that has been gradually underway since mid-May in most counties. Though limited, we have been observing improvement in the economic indicators for the state in late May and during the month of June.

Based on initial and continuing unemployment insurance recipients through July 11, the estimated weekly unemployment rate has increased to 16.4 percent, up from 15.7 percent in the previous week.

Nationwide, the estimated unemployment rate is 13.0 percent, about the same as it was in the previous week.

The reversal is devastating to consumer confidence. Closing down the economy again, warranted or not, broadcasts the notion that the pandemic is out of control and dangerous. This causes consumers to retreat further from their spending patterns, sentencing the economy to an extended period of recession and eventual recovery.

Nearly in tandem with the new shutdown orders and renewed layoffs of workers this week is the expiration of the federal $600 weekly unemployment insurance bonus on July 31st. Consequently, another fiscal rescue is needed for California workers, but is unlikely to occur.

Ask Your Agent: 10 Questions for the Closing Process
What Are Experts Saying about Home Prices?          Does Your Home Have What Buyers Are Looking For?

Thank you for Stopping By Richard Weeks

Time To Buy A Home

The Cost Of Waiting