Esek Hopkins was born in Scituate, Colony of Rhode Island and Providence Plantations back in 1718.  The only information I could find out about him was when he was twenty, he went to sea.  During the French and Indian War, he was a privateer.  When he wasn’t at sea he was engaged in Rhode Island politics serving as deputy to the Rhode Island General Assembly.

In 1775, he was appointed brigadier general, commanding all military forces for Rhode Island. In 1776, he took command of eight small merchant ships and converted them into Men-0f-War vessels.  That same year he conducted the Raid of Nassau where he captured munitions and a six-gun schooner.

After the war, he continued to serve in the Rhode Island General Assembly retiring in 1786.  He returned to his farm where he died in 1802, he was 83.

What you may not know about Esek is that he was the only Commander in Chief of the Continental Navy during the American Revolutionary War. 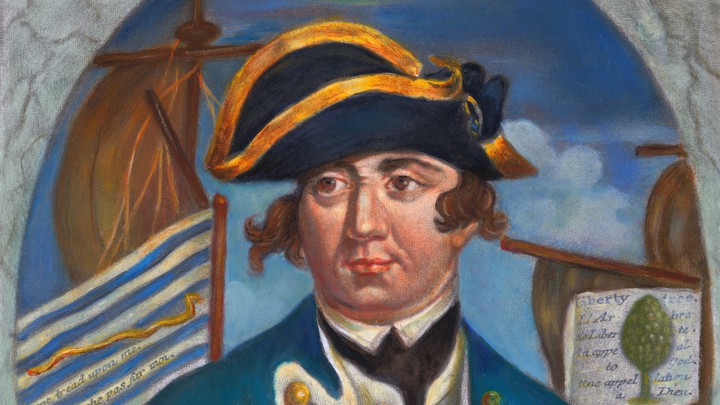 I did not know that but thank you once again for my daily dose of knowledge.

I hope the munitions were put to good use.

Have a safe and nice Labor Day.

An interesting man, who seemed to grab oportunities where he could.

Enjoy the holiday and have an outstanding week.

Good Labor Day morning, James... and another historical figure most of us have never heard of and probably would not have done without your post.

Good morning James. And once again in familiar form, I had no clue! Enjoy your day!

I must say he was styling guy for a sea dog.

Hello James - a name from history I previously was unaware.

An interesting life well lived by another great American patriot. Good one!

Another wonderful moment of unknow history to us, and illustrated by Barbara Todaro .  Happy Labor Day!  A

That is quite an honor James Dray , to be the only Commander and Chef of a branch of the military. Thanks for honoring him today with this post.

Happy Labor day, James! Thanks for an interesting read, and for inspiring Barbara to share a photo!

Hi James- so much we don't know...so many people who helped in some way to shape history. Thank you and thank you Barbara Todaro for adding to the post.

Hello James and another great history lesson for us here in the rain.  Make ita great day!

Having been to Rhode Island many times I just knew they made some great Martinis with side cars in the lat 1980's had no idea that they had a Naval Hero too:)Endre

A seaman, a politician, a general, farmer and Commander in Chief of the Continental Navy.