Edwin Hughes was born Wrexham, Wales back in 1830 to William and Mary.  He worked as a shoemaker until 1852, when he joined the 13th Light Dragoons of the British Army.  In 1854, he sailed from Portsmouth to the Crimea.  After arriving he saw battle at Balaciava, Inkerman and Sevastopol.

He rose through the ranks to retire after 21 years of service as a troop sergeant major.  He was awarded the Army Long Service and Good Conduct Medal.  At the time of his retirement he was 42.  He died in 1927, he was 96.

What you may not know about Edwin is that he was the last surviving member of the Charge of The Light Brigade during the Crimean War of 1854-56. 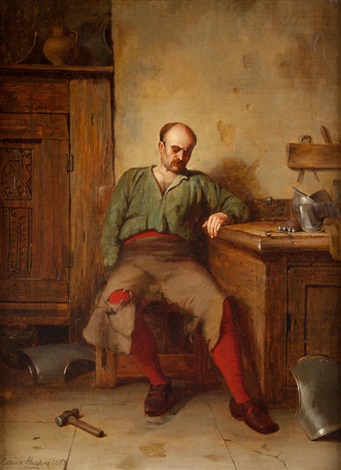 A lucky man to have survived the charge and lived a long life!

Good morning, James... haven't given The Charge of the Light Brigade any thought in forever... enjoyed this piece of history.

Good morning, well I believe you could say coming in last has some advantages.

Good morning James. Edwin was definitely an adventurous individual in a rough and tumble time. Enjoy your day!

Hmm, this is the first that I have heard of the Crimean War, but that seems like an area of the world that I might one day like to visit.

I must admit I did not know that but now I do. 😃

It's been a long long time since I've even heard of the Light Brigade James Dray but know that you have peeked my curiousity I'll have to revisit that history.

Somewhere in a history class I learned about the Light Brigade.  Thank you for reviving the memory.  A

I remember learning all about the Charge of the Light Brigade in school, interesting to meet one of the few survivors.

Hello James,  You are a great history teacher to us here in the rain daily.  Thanks teach!

This was another interesting read, and you were correct - I did not know who Edwin was nor his claim to fame.

Hi James- very interesting and he led a long life!!!  I'm going to read again about the Charge of the Light Brigade.

Wow I am amazed after all he  went through he lived till 96 years of age... reminds me of my friend she was an Escrow Officer then became a Realtor and now she just celebrated her 95th birthday....Endre

He enjoyed having a 53 years of fruitful retiring years. Telling children what he did in Black Sea.  Thanks.

Given his background and the fame bestowed by the The Charge of the Light Brigade, I doubt if Edwin Hughes ever had to pay for a drink in any pub in England.