Edward Patrick Francis Eagan was born in Denver, Colorado back in 1897.  He graduated from Yale in 1921, he then entered Harvard University studying law and later at the University of Oxford where he graduated with a Bachelor of Arts degree in 1928.  In 1932, he was admitted to the Bar in the United States.

During WWII, he enlisted in the United States Army.  He fought on many fronts rising through the ranks, when he was discharged he was a Colonel.  He died in New York City in 1967, he was 70.

What you may not know about Edward is that he was the only person to win a gold medal at both the Summer and Winter Olympic Games in different disciplines.  In the summer games he won the medal in boxing, in the winter games in four-man bobsledding, in 1920 and 1932 respectively.

Have a safe warm and beautiful Thanksgiving Day. 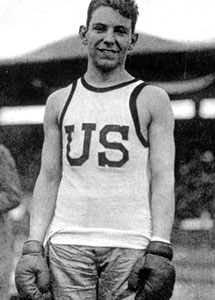 You just can not keep a good man down.

Wow, I would say he was in for a good fight!

Good morning James. Edward was not a man you wanted to meet in a dark alley! Wow, what an athlete! Enjoy your day!

Hello James - a rather amazing accomplishment.

It sounds like he was a talented man indeed.  I hope that you have a wonderful Thanksgiving!

Good morning again, James. Now that is what I call a true athlete with a love for sports!

Each Friday I have my one beer of the week at a bar called Sports On Tap. They always have the Mixed Martial Arts on several of their TV's. It makes me miss the days that the men in our family would look forward to seeing Caucus Clay, Smoken Joe, and other greats box. This MMA stuff is just to barbaric to me. Have a GREAT Thanksgiving James Dray .

I never knew that someone had won medals in both the summer and winter Olympic Games. I knew it was possible but I wasn't aware of it. Thank you

Happy Thanksgiving from my family to yours James Dray

Have a lovely Thanksgiving. Good morning James Dray - there are only a few athletes that excel in two disciplines.  Have a Happy Thanksgiving.

What a wonderful and upbeat story this was.  Thank you.

Wishing you and yours a delightful Thanksgiving day.  A

Happy Thanksgiving to you and your family.  I hope you have a great meal today with lots of leftovers for tomorrow.

Hi James- that is really interesting. How amazing to go to the Olympics in more than one discipline but to medal as well is quite an achievement.

There aren't too many people who have been able to compete in both the Winter and Summer Olympic games I don't believe, and not with the success he had!

Gifted both mentally and athletically, Mr. Eagan put his talents to work. He had a pretty amazing life!