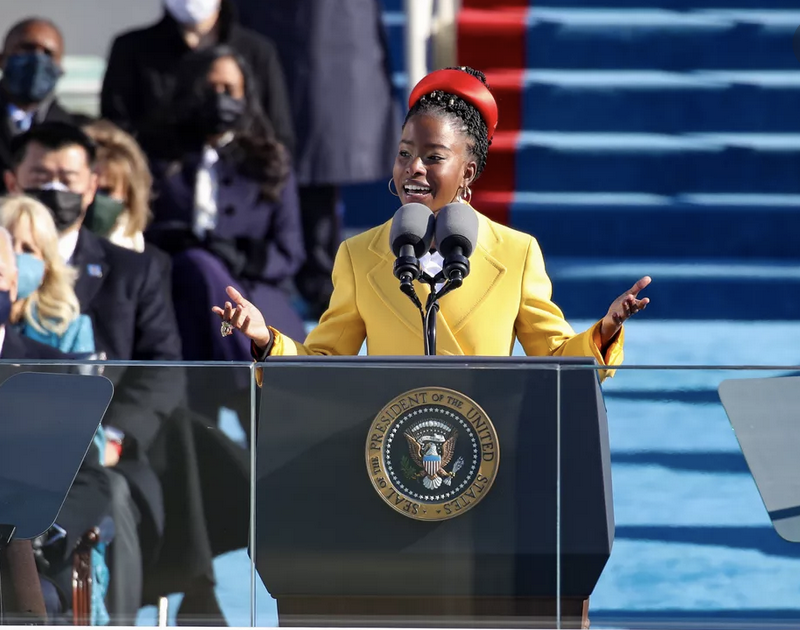 This is a picture of a young woman named Amanda Gorman.  Today, she was invited to be the Poet Laureate and read a poem that she wrote, shortly after the events at the Capitol on January 6th.

Amanda read a short poem entitled "The Hill We Climb" and it was beautifully written.  More impressive than that; Amanda is all of 22-years-old.  She is a Harvard graduate, daughter of a single mother, and descended from slaves.

I was trying to remember what I was doing at the tender age of 22 and I can guarantee you that I was not invited by the first lady, nor any other lady, to read, write or sing and dance anything.

In fact whatever I was doing probably had something to do with a science experiment that I conducted frequently which involved turning generous amounts of alcohol into urine.

She was poised, eloquent, and confident.  You couldn't hear a hint of nervousness in her voice, in fact it felt like she was giving a sermon.. (A "sermon on the hill", if you will).  She was the brightest part of the inauguration today... and that's no small feat in an event that included Garth Brooks, Lady Gaga and Jennifer Lopez.

She gives me hope for the future.

You must sign in or register to leave a comment
Login Register
Show All Comments
Rainmaker
332,480
Joseph Domino 480-390-6011
HomeSmart - Scottsdale, AZ
Real Estate Made Easy

Yes, Amanda Gorman does give hope. We need to aspire for more, without accepting the lowest common denominator as the standard.

I am sorry that I missed her.  I read something about her this morning.  She grew up with a little bit of a speech issue so it has made her diction very precise and it seems - lovely to listen to.

Alan, this young lady gave me goosebumps!    I expect she will live an extraordinary life, inspiring goodness, and decency.

When I was 22 I was a newlywed learning a new way of life.

I am sorry I didn't get to see her read her poem.

Thank you for sharing this Alan May.

I had not seen her speech, but had heard that it was one that must be seen. So after reading your post, I found it online. What a wonderful poem/speech from a very poised and well spoken 22 year old. I am sure we have not heard the last from Amanda Gorman.

Good morning Alan May so at the tender age of 22, what were ladies asking you to do if not read, write or sing and dance?

At 22 I was on a paid vacation which included 3 squares a day and all the clothes I needed.  Plus a few additional accessories Boots, rifle, bayonet

It was beautiful Alan!

She is an absolutley amazing young lady with a very bright future!

She is simply a rock star. I adore everything about her, Truly the most passionate and moving poetry recital ( and words) I've ever heard. Go, Amanda, Go.

Clearly handled a nerve racking moment with grace..not to mention the talent.

Of course, I had never heard of Amanda Gorman before January 20th. Now, I know that I will hear about and see her many times in the future. She is an amazing young woman.

Feb 17, 2021 07:01 AM
LIKE
#13
You must sign in or register to leave a comment
Login Register
Show All Comments
Older Post Newer Post
Back to Top
Generate More Leads from this Listing
With a Trulia Pro Account
Learn More
Find what you need?
See More Blog PostsAbout Real Estate! SEE MORE NOW!
Ambassador
1,787,961