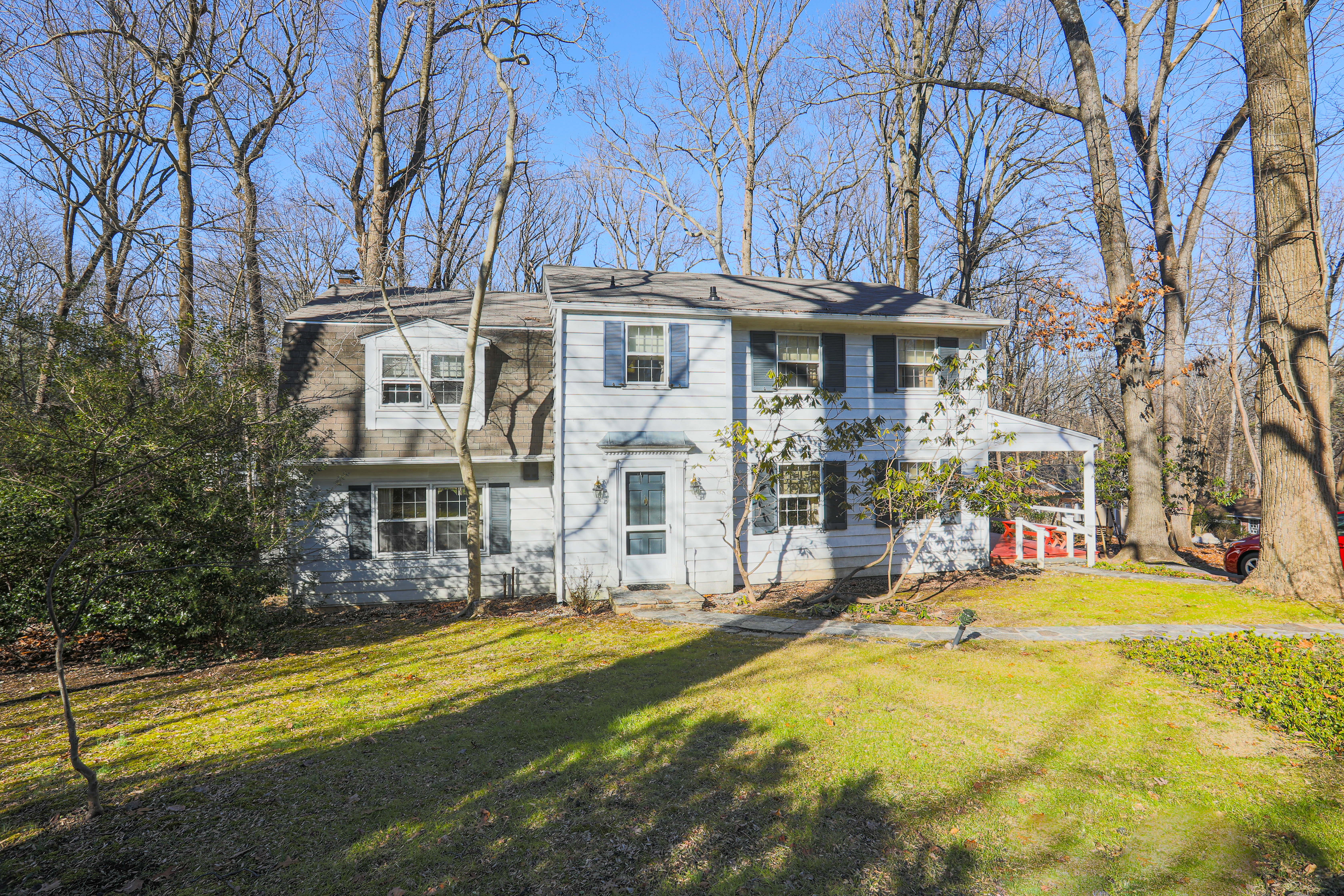 The year was 1952. Martin, who had hoped to be an architect, was now in the family business practicing law. Scraping together $350 to buy a parcel of land way out in Baltimore County, my story begins.

Working with a builder, Martin finally got to design . . . me!

The site had its challenges, especially since the goals included taking down as few trees as possible, and of those, no dogwoods were to be touched. The hill presented more challenges. Once under construction, issues like curing concrete in an unheated structure had to be dealt with, and were.

To accommodate Martin’s family to be, the original center hall colonial design included a living room, dining room, kitchen and half-bath on the first floor. A utility room held the furnace, electrical box and the washer and dryer. Upstairs were two large bedrooms, a full bath, and a smaller bedroom planned as a nursery.

The steps from the first to second floor, or perhaps more accurately from the second to first floor, had a special plan behind them. Now with one baby boy, the steps were to be built wide enough for Martin to walk his yet to be born (or even conceived!) daughter down to her future wedding, a dream realized much later and now a cherished memory. Talk about planning ahead!

The landscaping brings its own history, with the rhododendrons along the front and back of the house coming from great-grandmother’s home. From the next generation, Grandma’s garden contributed the Lilies of the Valley in the front yard. Added in the early ‘60’s, the azaleas in the island inside the circle of the driveway grew from 1-foot twigs.

Changes came to the family, including another son and finally a daughter, as well as my interior.

Always a place for music, a piano graced the living room for about the first decade. The opening from the living room to the hallway grew to accommodate first a Hammond spinet organ, and later, theater organs.

Changes were made over time to the kitchen. The most distinctive feature, the restaurant style booth, was first a space for the kids to play before becoming a space for eating. The goal, however, was always to make it a little easier to keep an eye on the children.

As the children grew, the need for more space became apparent. The youngest had outgrown the nursery, and more area for activities had to be created. The addition in 1964 added two full sized bedrooms upstairs, with the nursery morphing into a walk-in closet and the children’s bathroom. Downstairs became a sunken family room, fully insulated and soundproofed to spare the neighbors the constant sound of the kids playing electric guitars. Soundproofing didn’t help when the kids played outside on the kitchen roof, but the neighbors thanked the parents for the free concerts anyway. This was also when the basement’s outdoor access was created, and a new heating system and oil tank added.

The magnolia out front stood watch throughout the build, just as it continues to do so today.

The final big change came when the children’s bathroom was expanded. The eave was extended to accommodate a much larger bathroom incorporating a jetted tub, skylights, and a window seat, all graced with marble.

Along the way, two-zone heating and central air conditioning added to the comfort of the home. Recently, while installing a new septic system, the woods behind the house were pushed back, brightening the backyard, and finally allowing grass to grow!

It has been a wonderful journey, all these years and memories. And as the last of my first family makes plans for new accommodations I look forward to new folks and new memories. May I bring you the same joy and comfort already ensconced within these walls. June Piper-Brandon So good to see you. Maybe you have a buyer for this home. I would love to work with you!

What a creative way to present your new listing.  I enjoyed reading the story and wish you the best of luck selling it to another homeowner that will continue the home's story.

Congratulations on your new listing.  Nice house and nice job with your presentation.  Interesting story of the history of this house.

What a wonderful story of 2606 Old Court Road's history! I can almost envision the entire in my mind!

Good morning Margaret Rome Baltimore 410-530-2400 and what a wonderful home. Lucky it was able to tell you it's story

Thank you very much, Margaret, for sharing this story.

Hi, June Piper-Brandon Good talking with you this morning. Good luck with your new company.

Raymond Henson, SRES, GRI It is a beautiful story about a family home!

Rocky Dickerson This house is a good story teller!

Kat Palmiotti Yes, that's the sign of a good writer!

Grant Schneider,  Glad you were able to have good memories from your home growing up.

Good to see you, Roy Kelley !

Hello Margaret - houses may be buildings(especially to an observer) but homes have stories that connect them to people.  Those histories they tell are important.  I like the angle you chose to share with this post.

Thank you, Michael Jacobs. For many, our homes are not just sticks and bricks! I, too, love the history of this family home.

Good morning, Margaret Rome Baltimore 410-530-2400 - I was very intrigued by your title. I just knew, coming from you, this was going to be a good story.

Margaret! I LOVED this story about the Baltimore house!!! It sounds like a classic and would make a good book for new home buyers or even children who love to play House!

If I was a kid and this story was written in a book, it would have inspired me further, along with my Dollhouse, dolls, doll furniture, doll clothes, paper dolls, and playing dress up while I rearranged my dollhouse furniture!

Thank you for entertaining me with such a great story!!!

This entertaining story was written by the daughter who walked down those stairs!

Margaret Rome Baltimore 410-530-2400 - The daughter of the Home Owner left her footprints behind in storytelling time. It was very enlightening!

Patricia Feager, MBA, CRS, GRI,MRP, I love when a family shares the home's history-making memories! Thanks for your kind words!