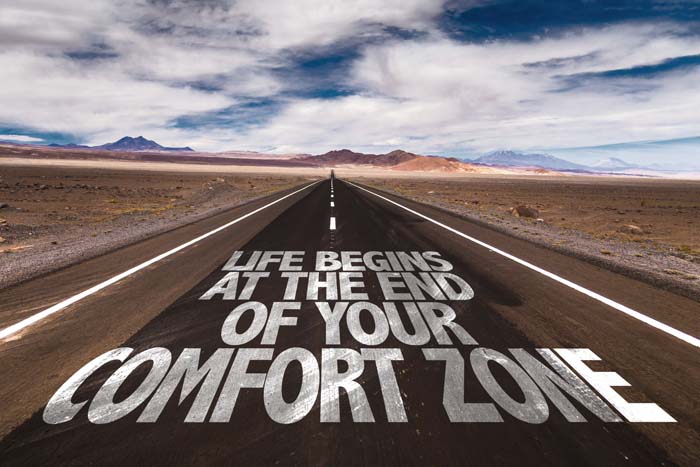 Generally, people find it hard to leave their comfort zone. Occasionally, you get forced out of your comfort zone and this is what happened in 2020. However, being forced out does not guarantee success. You could be stuck not knowing what to do next. I found this quite common during March of last year.

We often hear people say that want to research this. Some people research so much that they have paralysis of analysis.

Another way to describe this thought process is what I would call “Getting ready to go to work”. For example, “I still don’t have my resume, my presentation, or my 2 sharpened number 2 pencils”—you get the idea! Often people want to do great things, but they never follow through. Why? One possible answer is that the rewards aren’t enough to motivate them into action. Another probable answer is procrastination has derailed or stalled them. The inability to act can often be traced to fear, doubt, or the absence of a clear picture of the potential rewards and consequences.

Some of these fears include:

Fear of criticism, rejection, or exposure: The need for social acceptance will result in going to great lengths to adopt a mode of dress or a certain type of behavior because of fear of criticism and rejection of others. Fear of having an idea rejected continues to lose billions of dollars for American business.

Fear of the unknown: The need for security and safety causes us to be fearful in those situations in which we’re not sure what is going to happen. Our fear of what might or might not happen can cause us to keep from doing those things we should do to bring us closer to our goals. One key to addressing fear of the unknown is examining the possibilities and then weighing them against doing nothing.

Fear of failure: Whether it’s the president who’s afraid to make a change in structure or the manager who is afraid to develop a more competent, self-directed team, or an individual considering a business of their own, fear can be a major deterrent to success. If you promote a risk avoidance mentality, then the entire goal setting process can be stifled. If mistakes are met with criticism and/or punishment, people will be inclined to do only what they know how to do. It will inhibit creativity and improvement. By not trying, people frequently ensure failure—the very thing that they’re trying to avoid. Fear of failure has blinded many people from seeing opportunities. It is important to remember that failure is important to success if it is viewed as an opportunity to learn. To change failure from a negative experience to a positive phenomenon, eliminate those conditions which contribute to fear of failure.

We need to face up to fear. Remember that it is ok to fail and this is part of learning. Just do something. What’s keeping you from succeeding?  For a similar post on our website see HAVE YOU BEEN FORCED TO LEAVE YOUR COMFORT ZONE?

Are you ready to make decisive moves and create a new normal?

Spot on my friend! We must get outside of our little areas of comfort in order to see what is out there for us.

These are some great tips. Since last March our way of doing business has changed. Pushing ourselves outside of our comfort zone may be what some of us find rewarding. Depends on how one views the failure.

Ed - looking ahead and using the crisis to shape changes.

George - right that is where life begins.

Sheri - I think some people who were not as adversely affected are getting comfortable.

Anna - there are those that are still complaining and making excuses to avoid taking action.

Kathy - so true.  This is not the time to think of what will go wrong.

Paula - we have all been provided that opportunity and we need to step out.

Melissa - that is just it.  Make sure you have a vision.

Great points, Grant. Thanks for sharing!

Generally, people find it hard to leave their comfort zone. Occasionally, you get forced out of your comfort zone and this is what happened in 2020. However, being forced out does not guarantee success. You could be stuck not knowing what to do next. I found this quite common during March of last year.

Sham - this is true.

Learning to adapt is key: using our brain to figure ways to handle the situation.

Adapting is really part of our everyday lives but it doesn't really hit us until it's a Pandemic or other natural disaster.

Such a great post, Grant Schneider! You've certainly hit all of the high points. One of the things I've remembered from something I heard years back was "If you don't change and adapt (in other words, get out of your comfort zone) your life will be exactly the same 3 months, 6 months, a year, and so on from now". That has always stuck with me, albeit at times it is certainly easier said than done!

You are right, we won't grow if we stay where we are.

In our current market these fears are ever growing. The lack of inventory has really stifled buyers' attempts at purchasing and causes anxiety. Being creative and getting out of our comfort zone will help us to naviate these times.

Faye - we CAN reprogram our brain.

Greg - yes, and doing the same thing and expecting a different result is insanity.

Chris -the more failure the closer to success

Erik - too much success is also a challenge.

Grow, stretch, develop. Anyone in real estate knows you reinvent your jobs daily, you adjust your attitude or keep yourself in a hole. Rising above the rut means focus, education, making real estate a sport you train for day and night. Athletes don't crank it up just the hour before a game and then expect championship rings. They train all the time and have focus from the effort they know pays off from experience.

These are the best of times if you see the pathway and connect the dots. Whining and being self absorbed or feeling sorry for yourself replaces the ability to look around and rise above by digging deep to fly high Grant Schneider . Lou Ludwig motivated us like you do in how to avoid some of the common traps of human nature that steal a person's joy.

Right on Grant, thanks for sharing!

Another probable answer is procrastination has derailed or stalled them. The inability to act can often be traced to fear, doubt, or the absence of a clear picture of the potential rewards and consequences.

While I cannot explain it ... something shifted in 2020.  I feel like I am now living comfortably outside of my comfort zone.  An interesting shift for me. I'm liking it!

Loved your Post Grant and there comes a time when we discover what is our "comfort zone" and like Kathleen Daniels, Probate & Trust Specialist  we might be comfortably  living in it:))))Endre

Andrew - I really appreciate my mention along with Lou Ludwig .  I met him in person.

Sham - thank you for reading.

Kathleen - we had to make the shift but like you I found some new methods and purpose.

Endre - for me too there have been new possibilities.

My comfort zone today, with over a foot of snow on the ground and bitter cold is in the sanctity of my warm thoughts and house. Happy belated birthday to your wife and happy Valentine's Day to you both Grant Schneider 👍

Grant, great advice, and something we should try to do, and see if it feels good!

Grant this is a post that should be read by all who want to go to the next level,  so glad it  got Featured, Endre