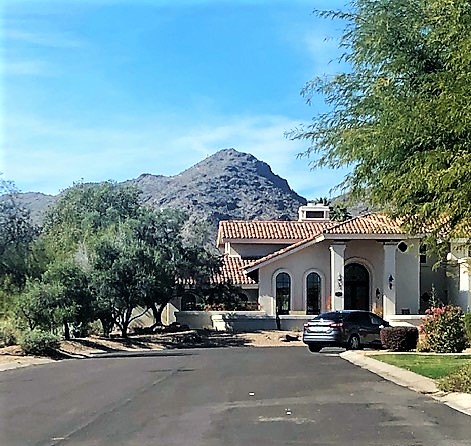 Ahwatukee Customs is a neighborhood within Ahwatukee near the scenic Ahwatukee Foothills.  These homes are on larger lots than average and typically over 3000 square feet.  This  area is a bedroom community of Southeastern Phoenix .

The origins of the city name, "Ahwatukee" are supposedly derived from one of it's earliest inhabitants, Helen Brinton. Brinton came up with the name  after her time with the Crow community in Wyoming.  Ahwauktee was thought to mean  "house of dreams."  Since 2006, that  translation has been challenged to mean "land over the hill."

Historical information shows the city was originally home to a 12,000 square foot mansion, on 2000 acres.  The home was a winter get away for Dr. and Mrs. William Van Bergen, founder of the then Northwestern Dental School, since closed.  It was completed near Thanksgiving, 1921,  but Dr. Ames passed in February, 1922 and his wife passed in 1933.  Helen bought the home in 1935 and passed in 1960.  The home was eventually torn down in 1979.

Official development of Ahwatukee began in the 1970's and the city today is home to just over 83,000 residents. Even though the city is named "Ahwatukee, that city name doesn't exist for mailing addresses as the city was annexed by Phoenix.

There are currenty 2 active listings; 6 homes under contract, and 8 sales in the last 90 days for homes in all three zip codes priced between $800,000 and $1 million.  The average size of these homes is 3866 square foot, with 4 bedrooms, and homes typically have 3 car garages.  There are currently only 48 total active listings in this area (85044, 85045 & 85048, so it's not surprising to see just two active listings priced from $800,000 - $1 million.  This is a "micro-market" when reporting data, which is challenging while creating reports. Homes in this price range sold for an average of 49 days in December, 2020.  A home sale in January upset the apple cart and change the days on market to 104 days. Between  February and March, 2020, list price and sale price per square foot were neck and neck.  Now there seems to be a running gap; however, this micro-market could easily change with such low numbers to report.  One sale that is over-priced, taking longer to sell, could skew results in this segment of the housing market in Maricopa County. Sales in 85044, 85045 and 85048 have been in a general upward trajectory since the bottom of the housing market  May, 2012.  The offiical bottom in all of Phoenix  for the same price range was April, 2011, so this area continued it's decline in sales prices longer than Phoenix in general.

This graph shows the change in Annual Averge price per square foot by price range, which is 4.9% for homes between $800,000 - $1 million in all parts of Phoenix. There are currently 4,929 active listings of all types in Maricopa County, population over 4.6 million; 12,317 listings under contract; and 7,353 sales closed in January, 2021.  Buyers need to have larger down payments, have good terms,  and be flexible with time lines as there are sellers without a home to go to.  If you have cash, your offer may still not be accepted if you don't offer more than list price for homes in Maricopa County!

Make sure to use an experienced agent when buying and selling homes in the Phoenix metro area.

Hi Jan Green - this was very interesting for me.  In all of the times I travelled to Phoenix I never heard of this area.

Hi Jan Green buyers should surely appreciate the time and effort you put into preparing this very detailed market report for Ahwatukee Customs.... they'd be wise to call you for guidance when thinking about buying...

Hello Jan and thanks for the great market report that  you are sharing with us here in the rain.  Make it a great day!

Hi Jan,
Wow, this is a lot of interesting stuff. I always enjoy information about the origins of place names and their early settlers.  I had never heard of the Ahwatukee area. I do love the name. Maybe because we have a lot of the cities and towns in my area have Native American origins.

Good morning Jan Green great market report. I love Ahwatukee my parents owned a home and lived there every other week for over 20 years. It was a great base for them when we owned 5 apartment complexes in the valley.

I am certain that those people looking to move to Ahwatukee appreciate your detailed report.  Wishing you a great rest of this Monday, and a great week to follow. A

Jan  what a great history lesson about Awatukee. I knew some of it but not the orginal buyers history of the mansion.  Love it! It's such a great little community with awesome views and close to anything what one would want.  Great report!!

Thank you for commenting Grant Schneider !  This little spot is beautiful and scenic!

Thank you for commenting Barbara Todaro !   It's fun and interesting finding spots to showcase around the valley.  Appreciate your comments!

Thank you for stopping by Will Hamm !

You have a lot of interesting names of cities and towns in your area (including your town) Carol Williams  so no wonder.  I bet you'd find my hometown interesting, Wichita!

Then you know this area very well Rocky Dickerson !  Lots of time spent here with your family.  Thank you for commenting!

Let's hope so - thank you Ron and Alexandra Seigel !

I love history Anna Banana Kruchten CRS CRB, Phoenix Broker  and why things are named the way they are.  I met someone recently from a unique town in upstate NY who said the town was named after a particular incident in the Civil War - fascinating stuff.  Glad you appreciate the info.  Have a great rest of your week!

I enjoyed your market report...both seeing the statistics as well as learning more about the area, not one I at all familiar with!

Thanks for stopping by Jeff Dowler, CRS !  It's a quaint section of Phoenix that is serene and scenic. I didn't know it's origin, so this was a bit of a homework assignment ;)  Have a great rest of your week!

Thank you Myrl Jeffcoat for stopping by and commenting.  Have a great rest of your week!