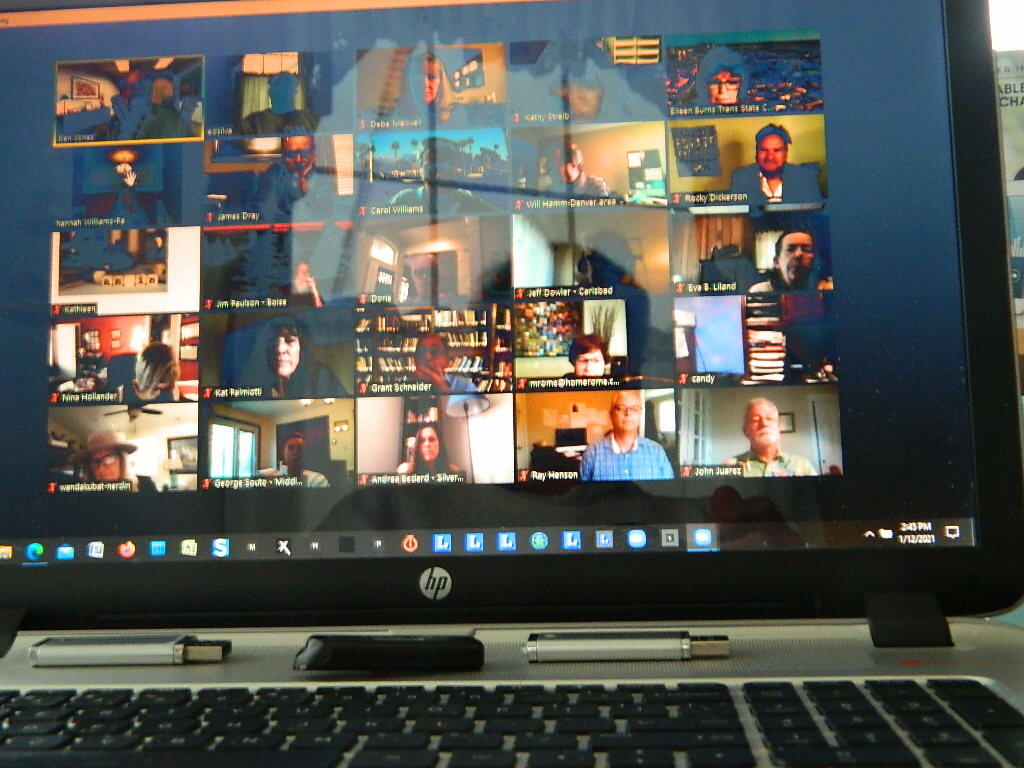 A State Of ActiveRain: Zoom Meeting with Ben Kinney

The Feb 2 Zoom event was special as it was a chance to hear from our illustrious owner, Ben Kinney, on the State of ActiveRain, and the changes that are being finalized to make the platform stand out as the premier blog for Real estate professionals.

In its infancy, Ben Kinney was the featured face of ActiveRain for the events that were known as RainCamps.  Being a very successful agent in his home state of Washington, he would share his tips on being a successful blogger and with his tutelage, as well as the challenges that were offered under Bob Stewart's direction the foundations for being a better blogger were formed for those of us who were members at the time.

Now settling in after a series of owners over the years, Ben is looking to take the platform to a level where it will benefit all as well as being the one source for all real estate professionals to self promote and be the ultimate research tool for consumers.

To this end, uniformity is the key and the new blog format that will be unveiled over the next couple of weeks will lead to the desired results, we all hope.

With the assistance of his trusted technician, Josiah Ubben, details on the changes were offered. Possibilities will be but not necessarily exclusively a uniform font style and color so that all posts will look similarly professional.

Beginning immediately, no blog post will be considered feature worthy unless a feature photo is included with the post.

The photo below shows a screen shot of a blog worksheet.  Just below the title is a place to upload a feature photo. This photo will have a minimum file size eventually and cannot be taken from the file library of the format file as it won't be loaded there unless done separately as one would for a blog insert photo. Also discussed was the work to be done to upgrade ActiveRain university as a working resource for anyone seeking information on all things blogging.

Ben's vision is to create a new section to ActiveRain devoted to real estate news, and at its onset may be looking for ActiveRain members to be the reporters who will write informational posts on real estate.  For many years blog posts have been written by AR members offering insight on new methods of doing anything related to real estate.  Many times, these posts have been well in advance of other outlets offering the same news. Why not get members who have the insight write the articles and have it featured on this new section.  Make Inman news work for their information against the people who work in the trenches and see it first.

A more detailed Profile for ActiveRain members is in development to take the focus away from the Z group. It's being considered to expand the profile to allow for feeding in an agent's listings so that first contact will go directly to the agent and not through Z.

Full details were not offered as much is still in consideration, but the intent is to bring ActiveRain back into the forefront of the real estate industry and let us have better control of our business. It was a well attended Zoom call with 45 members at the height and all intent on listening to Ben and Josiah and getting questions answered immediately to the best ability for where the upgrades currently stand.

When initially established ActiveRain had focus and was instrumental to accelerating the careers of many who used it regularly. A series of changes of ownership did dilute the product but it's back on track to being the premier blog platform in North America.

By way of disclosure, the information offered within this post is to the best of my recollections for the way it was presented.  I believe I got the highlights but as all is in development there will most assuredly be changes along the way;

A State Of ActiveRain Zoom Meeting with Ben Kinney

Groups:
Almost Anything Goes
HAPPY AT ACTIVERAIN
The Lounge at Active Rain
Bananatude

Margaret Rome Baltimore 410-530-2400   It was a wonderful opportunity to get questions answered first hand and to get a better insight into the future of the platform.

Ed Silva you captured the essence of the Leader's call succinctly!  You also possess a wonderful sense of humor my friend😎  It is a wonderful moment in time to be a part of a positive movement to be the best in our industry.  It does not happen alone.  I personally am grateful for all the successes of my rainships and the giving and sharing nature on this current blogging platform.

Wish the negative Neds and Nellies could curb their lack of enthusiasm for the greatness occuring and efforts being put forth by our Ambassadors and members who religiously block off Tuesdays at 2pm eastern to make conributions to become "the force" and source of NEWS in our industry, even returning to LOCALISM!

The prospects are so exciting and any small role I can play to help Ben, Josaiah and all behind the scenes I am ready.

Endre Barath, Jr.   I have only attended about 6 of these Zoom calls and this was the best attended and it was mostly the old guard of AR in attendance.  Early on when the platform was running around the country making their pitch, people would complain that they had to drive 100 miles to see the RainCamp in person.

With some business as a result.

I got into real estate when I semi-retired as I was too young to collect a pension. When a client would ask me about a property 20 miles away I did not see it as a big deal considering I would have had days when I would drive 250 miles for a 90 minute meeting with a team of engineers.

If it's something that will add value, then a little sacrifice has merit, and not for nothing but you are one of those 200,000 plus and a member of the old guard as well.

Ed just to be clear Grant Schneider  drove from New York to Boston for a Meetup and George Souto  from Connecticut to name a few I don't remember you being there, not for nothin:))Endre

Brian England   Thanks for taking the time to stop and comment.  I did enjoy the Zoom meeting.

Brenda Mayette   In the early days I could see a lot of traffic being directed to my website from ActiveRain.  I am preparing a new site and hope to see similar in the not too distant future.

Kat Palmiotti   It was a great call for information about the future of the platform.

Jeffrey Richman   Maybe there's something in the post that can give you information and if you read the comments reach out to one of those that attended and discuss.

Rocky Dickerson   You may have your own thoughts on something I did not detail that you might wish to share????

Eileen Burns   You were rather vocal ad attentive as well, with a backdrop that made me jealous.  Thank you for the kind words

I loved hearing about all the improvements coming to our screens real soon! Thank you for the summary Ed Silva. A few questions popped into my head afterwards and I'll be sure to look for the next State of AR- Zoom session. I'd love to explore features to see international reach and get a (bigger) pie of the relocation/expat market.

I'm all for a more unified look, conveying a (more) professional image. AR has been instrumental to my career, too - AND helped me through a tumulteous period of time in my personal life as well. I'll forever be thankful.

Thanks for sharing this update on things to come with Active Rain. I have one suggestion, as a "BabyBoomer".... we were always reminded of the "KISS" (keep it simple stupid) theory when putting together a program for others to follow/utilize. Can this thought be passed along to those who are making the changes? I am intrigued with the concept of the Zoom meetings now available, unfortunately, 1 PM CST does not lend itself to fit my schedule. Is there currently a scheduled "replay" of the Zoom meetings where people like myself, can view the presentation at a convenient time? I'd think there would be a much greater participation/viewership if this option is/were available.

Andrea Bedard   I believe that your posts have to have details within the post to reach your target market as well as your tags at the end.

Thank you Ed Silva, I am thinking more along the lines of writing/publishing in a different language and having a dedicated space for it... a series of "How to buy property in the US" .

I've thought about it but throwing one post in a foreign language onto my regular blog has not appealed to me. I suppose I could have a disclaimer proceed it but perhaps there's a better way to go about it. It's just been a thought - and maybe some day it can be developed.

Great recap Ed. What I was surprised at was that Ben seemed not to know about the robo-man/men/women who clutter up so many pages with their robo-entires. Pages and pages can be seen of them all day long. My question is...When was the last time he signed on in the mornings?

You lost me on the "help icon below"? The Ambassador response won't let me send a message as there is some sort of spam blocker app which cancels the ability to send a message.

Thank you for sharing all of this Ed Silva. It sounds like exciting changes in the Rain are afoot!

Interesting to see the vision of the platform evolve. Curious if it will have spill over to the office's Ben owns (like mine)?

I wish that I was able to get on the call.  I'll be on the next one.

I’ve heard some really good things about the sessions and I hope they did wonders!

Don’t worry about that Wayne, you’ll get them next time and you’ll have some fun probably!

Thanks for the help. I eventually found the help button at the extreme bottom of the page and then posed the question relating to a rebroadcast of the Zoom meeting.

Many BIG changes coming to the AR platform/community. I am so happy with all Ben is doing.  Amen.