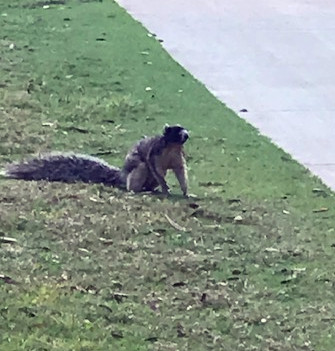 An Aggressive Species of Squirrel

As I was enjoying the mild weather I noticed what appeared to be a squirrel but was significantly larger and not a normal squirrel color. The species is the Eastern Fox Squirrel and can grow to almost 2 feet long/tall and a much longer tail.

They are aggressive, however as I opened up a powerbar one fellow must have caught a wiff and came running right over. This was within 3 feet of me and he looked like he wanted to jumo up and grab the bar.

It wasn't all about the squirrels, however, as a hawk came to ground with something caling it's attention. An Aggressive Species of Squirrel

Wow!  I don't think I would have stood there looking at the wildlife!  That squirrel looks a bit scary!  I am glad you survived.

We have a couple kinds of squirrels here in Sacramento.  Neither looks like the one pictured.  Your pictured critter looks like he could take on the world.

Hmm, when I saw the picture I was thinking that wasn't a squirrel but something else.

HI Ed... that is mega-squirrel if I ever saw one... actually somewhat scary. Of course those hawks aren't exactly friendly-looking either.

Hi Ed Silva - that is funny.  Maybe this time of year with limited food they are getting agressive.

CANDACE (Candy) STEVENS   I found myself being very attentive to where they were at all times.

Brian England   it was rather narly looking for sure.

Good morning Ed Silva I was at a driving range recently and squirrels wouldscamper over my shoes WHILE I WAS IN MID SWING! Some of those guys seem to have no fear

Wow! a mutant squirrel perhaps, and he took off when the hawk appeared.  We have crows building nests at the moment, and it groups chasing the hawks away.  A

Rocky Dickerson   in looking at the claws on these guys, I wouldn't want them that close to me.

Ron and Alexandra Seigel   From what I have read, they are not mutants, just large

Ed Silva I wonder if this is the type of squirrel that people are complaining about in the condos that they are saying do damage.

Hannah Williams   Any squirrel in a condo will cause issues

Ed being within three feet of that guy is a little to close!!!

Ed- I have never seen a squirrel like this and at 2 feet long, I'm not sure that I want to.

George Souto   I didn't care for the aggressive nature of that little guy.

Kathy Streib   I was closer than I wanted to be as well.

Ed, a two foot long squirrel?    Add aggressive in there, I would be nervous opening a door....

Ha ha Ed, that is truly a "squirrel" moment. I have those frequently but not really involving a living animal! :)