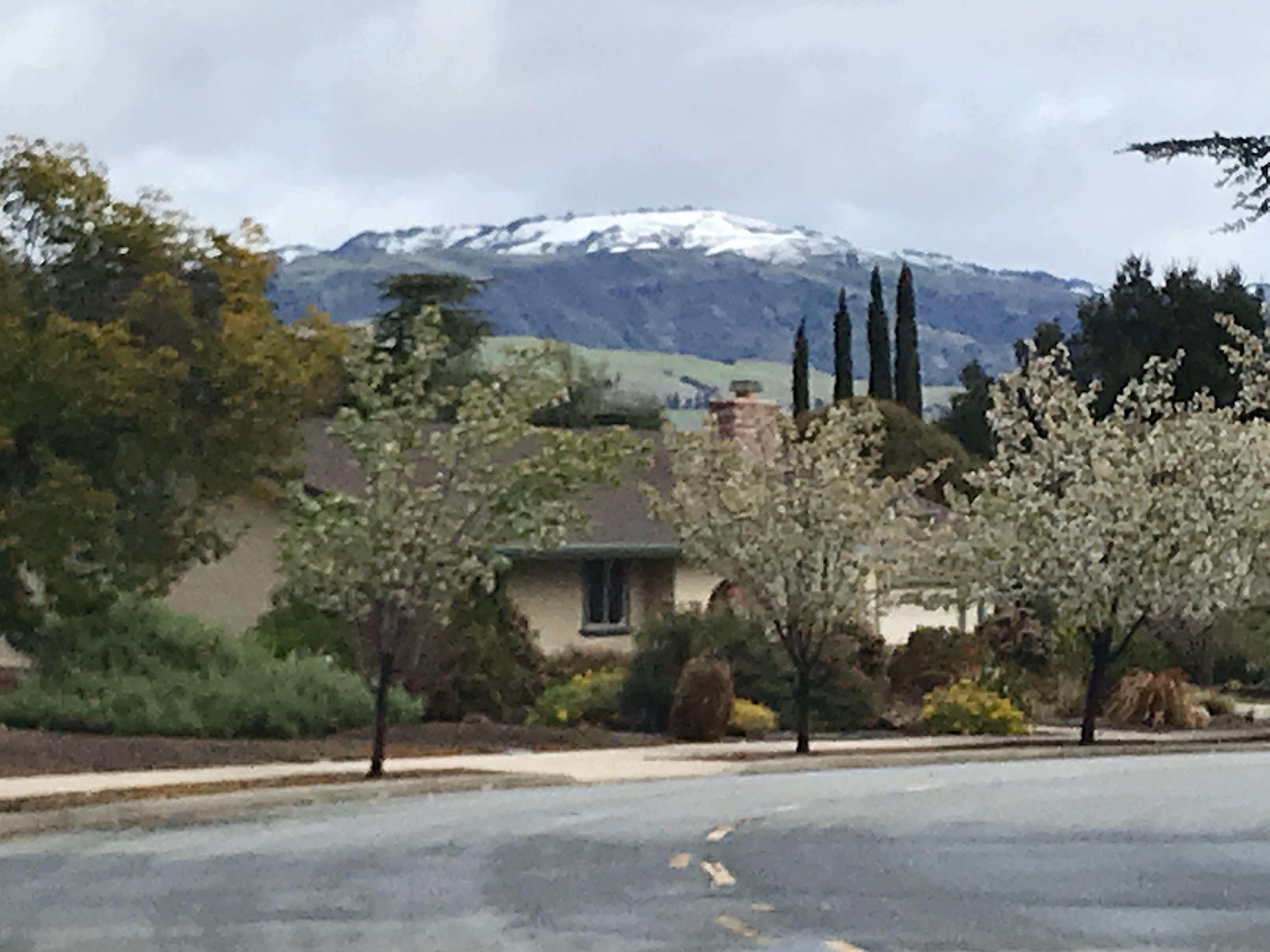 It is just 3 weeks away from spring break week where college students from all over the country come to California relax, drink C2H5OH and smoke(over 21) have a good time time on the Pacific Ocean beach.

Mother nature has played games with us this year. We were getting some precipitation from North West. Wait?  Isn't that coming from Alaska direction?  Water is highly treasured here. Having just level-1 storm twice since last spring we will take all the rain we can get. What we got was not expected. The Alaska freezing air stirred up with moist cloud formed hail which started in the North Bay and extended to South Bay where Silicon Valley was.  Kids stop paying attention to online work and went out admired the nucleation generated ice pellets. Below is what it looked like in a suburban neighborhood. Next morning the colder air resulted in long awaited snow flurries up to 2500 ft elevation. Beneath in Mt Hamilton Lick Observatory in East San Jose. The moon of Jupiter since the time of Galileo was discovered at this observatory in 1892. In 1975 "6216 San Jose" an asteroid was named after this place. Having more than normal precipitation such as 2020 created more vegetation. When dried it has the tendency to cause fires especially after July 4th wreckless illegal fireworks.  This Observatory property line had brush fires from the SCU Lighting fires which caused eye irritation and respiratory problems on top of Covid problems.

It seems like an early April Fool's Day Joke or a scene out of a movie!

Do you find yourself in a bit of trouble with unpaid bills and don’t know which way to go or where to turn? What about finding a reputable Debt Consolidation firm that can assist you in reducing monthly installment so that you will have affordable repayment options as well as room to breathe when it comes to the end of the month and bills need to get paid? ®Capital Managements Inc™ is the solution to your financial misfortune. We offer all types of loan ranging from $5,000.00 to $533,000,000.00USD with a low interest rate of 2% and loan duration of 1 to 35 years to pay back the loan secure and unsecured. Our loans are well insured for maximum security is our priority, Our leading goal is to help you get the services you deserve, Our program is the quickest way to get what you need in a snap. Kindly reduce your payments to ease the strain on your monthly expenses by Contacting us on the following WhatsApp:+19292227023 Email drbenjaminfinance@gmail.com

Loan Offer Alert For Everyone! Are you financially down and you need an urgent credit/financial assistance? Or are you in need of a loan to start-up/increase your business or buy your dream house. GET YOUR INSTANT LOAN APPROVAL 100% GUARANTEED TODAY NO MATTER YOUR CREDIT SCORE. drbenjaminfinance@gmail.com