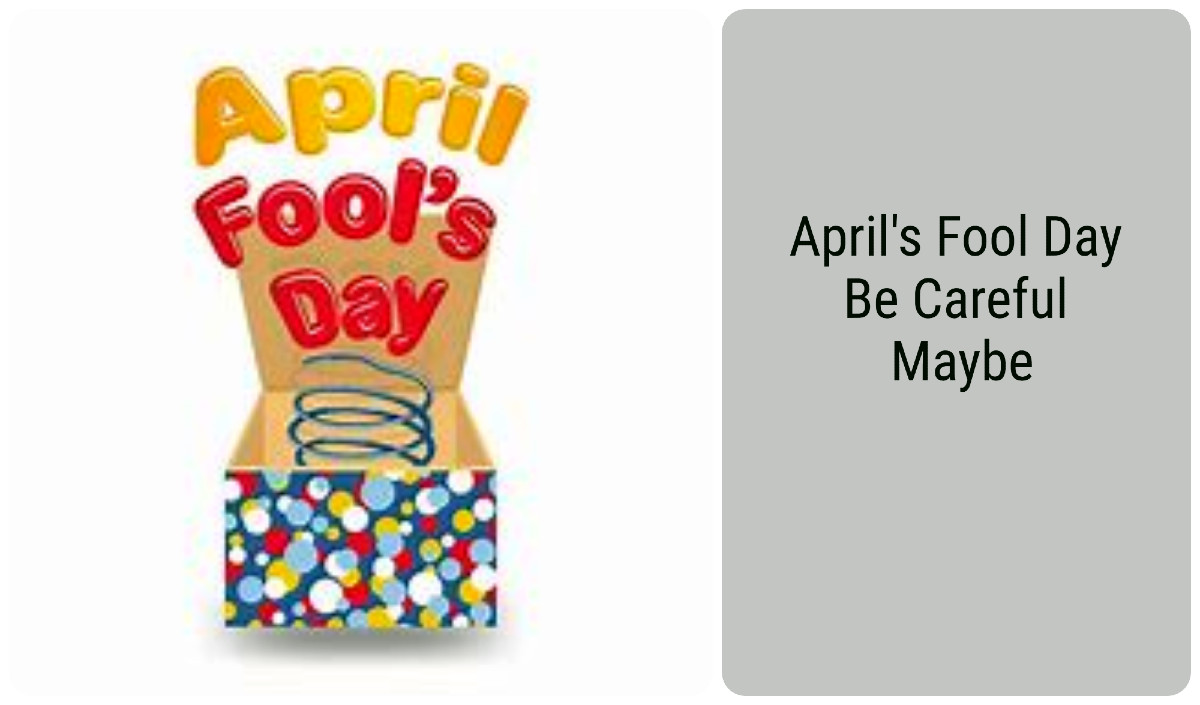 It's April Fool's Day  A Quarter Our Year Is History

There is a considerable amount of confusion as to the reason the day is called April's Fool's Day, but the most common theory is that it dates back to the 16th Century and the change from the Julian calendar, as initiated in the Roman days of Julius Caesar to the Gregorian calendar. Under the Julian calendar April 1 would have been considered New Year's Day and for those who insisted on celebrating the "old" New Year's became known as April fools and it became common to play jokes on one another. Some also say that it has to do with Mother Nature fooling us.

April is the month of rain, thus April Shower's brings May flowers, but it can also bring snow in some areas.

So however you choose to celebrate the day, be wary of the mischief makers around you.  For me it's wishing a cousin and a niece a Happy Birthday as they celebrate another click of the age clock today.

It's April Fool's Day  A Quarter Our Year Is History

Groups:
Almost Anything Goes
HAPPY AT ACTIVERAIN
Hyper-Local
Posts to Localism
The Lounge at Active Rain

Nina, I was tempted to get up real early and put a for sale sign on the house. After I thought of it I stopped as I didn't want to make all the neighbors happy

Mark, when I was a kid in school, these days just never seemed to end, and now I look back and wonder where the week went.

Brian, these days the mind doesn't think that mischievous any more

Kat, there cannot be as much mischief out there the people are too far away from each other

Joan, the prank was on me when I drove by a house that I wanted to get for a listing and another agent's sign was out front

Oh goodness that's not a good way to have your work stopped.  Liens are never good

Grant, normally professionals are too focused to pull pranks

A, the clock seems to tick faster when we least want it to

Michael, my April would be great if my buyer clients had something to buy

Rocky, it;s looking good so fr but the buyers are starting to get frustrated

George, there could be some white on the lawns by morning tomorrow

Hi Ed- my father used to wake me up on April Fool's Day to tell me it was snowing!!! I was very young so I fell for it and hopped right out of bed to look out the window.

There is some thing about that marker being on April fools day that it's just a little odd. I think we're all ready for spring right about now. Are you

Kathy, that is a harsh way t wake up and on occasion it may have been true

Laura, we are more than ready for some warm sunshine and the colors that come with it.

Roy, good Morning to you as well on this Good Friday

Getting to this a bit late, Ed, but an interesting bit of history.

Glad I had no pranksters in my life this year!

Ed, I rather love a good prank, and have been pranked as well, but not being around many people, didn't get either this year.