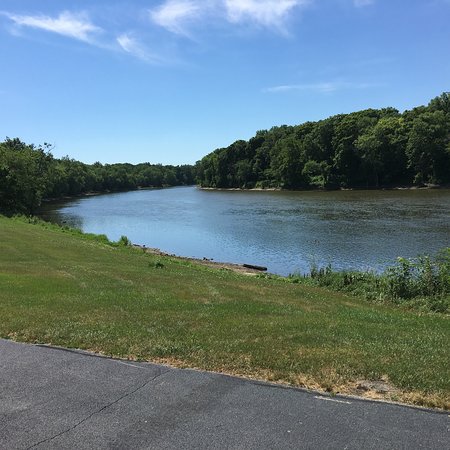 Perry Farm is a winning visit for the family.

Bourbonnais Illinois is the home of the Perry Farm. Today it is listed by the National Park Service of the Dept of the Interior in the National Register of Historic Places. But it wasn't always like that.

In 1835, Thomas Durham moved his wife and family of five daughters and four sons to Bourbonnais Grove,IL, about 60 miles south of Chicago on property on the banks of the Kankakee River. He built a farmhouse and a three bay English barn and a horse barn. Legend is the farmhouse cellar was part of the Underground Railroad. Thomas died in 1854 and left the farm to his sons. He generously left his daughters $5 each. The sons were not successful farmers and by 1866 had fallen on hard times financially and were looking to sell the farm. One sister, Martha had married David Perry in 1845 and David offered to buy the farm, pulling the cash out of a money belt he carried on him. Martha's mother was allowed to live in the farm as long as she lived. The Perry's decided to try and attract travelers on the way to Chicago to their farm for horse boaarding and lodging. But there was one problem. Another road on the east side of their property was taking travelers past their farm without stopping. To fix this problem, they proceeded to cut down a bunch a trees and block the other road, forcing those travelers to use the only road available, the one that went by their farm. Business was good, several more buildings were added. David was also a saw mill owner, providing sawn lumber locally for customers instead of them having to travel to Chicago.

David died in 1887, leaving the farm to his wife, who died 6 months later. The last remaining heir to the farm, Lomira Perry, died in 1961. She left the farm in a trust to the Illinois Dept of Conservation. The State of Illinois awarded the Perry Farm to the Bourbonnais Park District in 1988. In March 2006, it was listed in the Register of Historic Places. Bike trails from Perry Farm to the river. Today, the Perry Farm is one of the best local features for many outdoor activities. Bike and walking trails, kids playground, Children's Exploration Station museum, the Perry farmhouse exhibit, the old barns, small petting animal farm, picnic gazebo and concert and local theatre events. Other than the museum, it's all free or almost free.

How do I know all these fun facts? I am a local tour guide for the Perry Farm open visit day in May every year.

Thanks, one unverified fact I didn't mention is that Mrs Perry wanted a cellar for her root veggie storage. Mr Perry was not willing to spend any time doing it and handed her a bucket and a spoon and told her to do it herself. So she did. What a jerk he must have been. Allegedly.

What an interesting bit of history. Perry Farm looks like a beautiful place to visit. I cannot help but wonder how much $5 was worth back in 1854 when he willed his daughters this money. Most likely if they were married they had no rights to it anyway. Just food for thought

Thank you for your entry in the April Challenge

In the day, what could a woman possible need $5 for?? Nothin but trouble I always say. Sadly, some people still think that way.

Quite the history of the Perry Farm, with it's survival dependent on some fallen trees

Scott- this was such an interesting story,   So often we visit historic lands but never get the whole story. I have friends who lived in Kankakee (the Bairds) so I'll have to see if they've visited it. And yes, thank you for your entry in the April Challenge.

Kathy, I went to high school with Alice Baird, she lived one street over from us in high school in Gracefield subdivision. I taught her how to drive a stick shift car.

Those are beautiful views, Scott.  They provide a very calming feeling!

Thanks Myrl, it's a great river for so many reasons.

I am so thankful I got to read your story. I'm from Illinois and my dad was born in West Frankford. My father took us there for a visit and what struck me with curiosity was the history and of course learning experience about the hard-working people with generous hearts. Most of the people didn't have much but what many did pass on to their heirs was hard working ethics and values. The alleged story you mentioned about the woman who used a bucket and spoon to dig a cellar for her root veggie storage sounds believable to me. Several years ago, I went to Eureka Springs, Arkansas and visited an unusual historical house. There were similar stories about the woman who accomplished amazing household projects by herself because her husband wouldn't help. By the way, I'm hosting an AR Photo Journaling Contest this month. A story like yours would be PERFECT!

Thanks Patricia, Ill be sure and check it out. Glad you liked the story. Men were such jerks to women sometimes.

Good evening Scott - what beautiful views.  I love the sites that are preserved for the next generatrionas to understand the history.