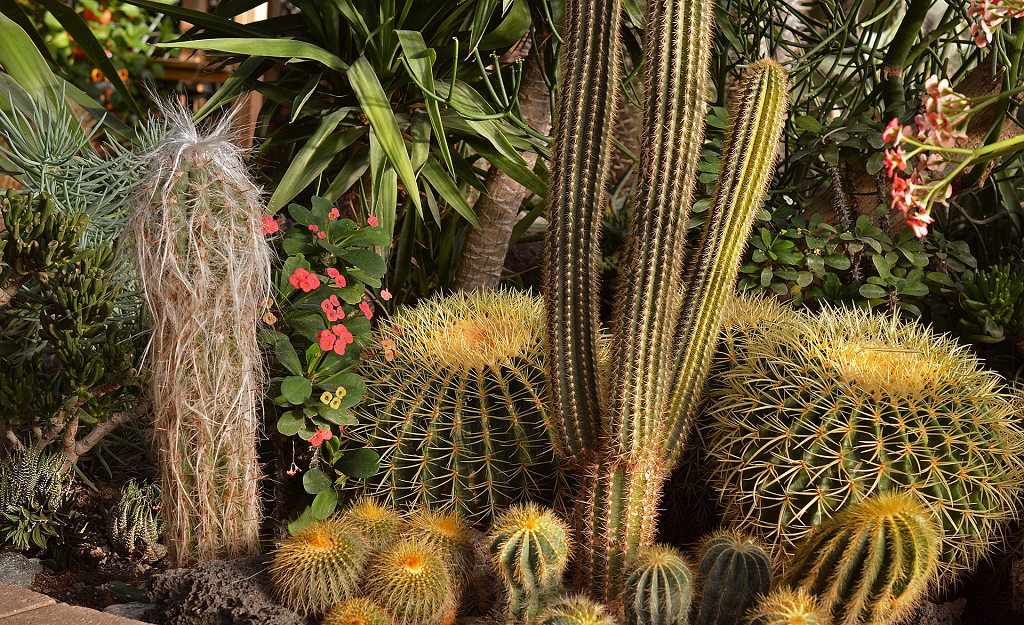 When most people think of Arizona they think of the desert, and rightly so because we sit smack dab in the middle of the Sonoran Desert. But what most people don’t know is that the native desert is rapidly disappearing.

In the late 1800s, a series of canals brought water to the desert. Arizona became an agricultural area. With irrigation, many crops like cotton and lettuce could be grown easily. Some crops had the benefit of two growing seasons which made them lucrative for the farmers. They also found that citruses like grapefruit, lemons, oranges, and melons like cantaloupe and honeydew, would grow easily.

As the population grew, commercial nurseries brought in plants from California, Florida, and South America and non-native plants began to dominate the landscape. Fortunately, some preservationists saw the necessity to protect the native flora. The Desert Botanical Garden in Phoenix is one such place that has become a museum of living things.

The Garden not only protects and cultivates native plant species it has become a home for the birds, bees, and butterflies that thrive on the natural flowers and cactus in the garden.

The Desert Botanical Garden has become a cultural center that promotes education through its Desert Landscape School and library. The Garden also hosts public and private events like art exhibits, concerts, weddings, and fundraisers. They also host an annual plant sale that offers property owners a chance to purchase and plant environmentally friendly native species instead of commercial non-native plantings.

Looking for a great place to stop for a drink or a fine meal? The Garden also is home to Gertrude’s Restaurant a fine dining establishment that features fresh seasonal menus that celebrate Arizona’s growers and producers.

So, if you are visiting the Phoenix area, why not stop in at the Desert Botanical Garden? I think you will be impressed with how lovely a native Arizona landscape can look. Hi there Joseph. Wow, what beauties. I would defintely want to visit the Desert Botanical Garden

Yes, desert plants can be quite beautiful.

We have been to that garden and it is truly special.  Some of those cacti are very tall and your cactus rose is in full bloom

It is a nice place to spend a day.

Hi Joseph- this is so interesting, and I would definitely want to visit if I were there.

The DBG is a great place. Fun all year long.

What a beautiful place to visit. While I was there I would love to eat at Gertrude's. Do you think if I gave you notice you could join me?

Thank you for your entry in or Spring Challenge

Yes, next time you are visiting let me know. I am always down for Gertrudes.

Hi Joesph,
I have been to the Botanical Garden once and would love to go again sometime.  I always enjoy photographing the various cactus when I am in the desert... especially when they are flowering.

Yes, the cactus flowers are short lived, but beautiful when they are in bloom.

Those are amazing photos of your Desert Botanical Garden, Joseph.  I hope you are enjoying your weekend!

Yes these are some great pictures. Thaks Myrl.

CONGRATULATIONS Joseph, on having this blog FEATURED in the Old Farts Club group!

Thanks Myrl for the feature.

The desert ecosystem is so unique. Great that the Garden offers a place to display it. L.

PS  And - a good home for the "workers" - the birds, bees, and butterflies that thrive on the natural flowers and cactus in the garden.

Congratulations on another feature - the photos are beautiful.  Makes me want to schedule a trip to the desert!

The photos are spectacular of the Desert Botanical Gardens! Congratulations on a well deserved featured post and excellent entry into this months challenge.

The Desert Botanical Garden is a very special place, indeed, offering great trails and education about living in the desert. Congratulations on this feature, Joseph!

So gorgeous. I love how diverse nature is around the country! Wow!

Hi Joseph,  Thanks for sharing this great post.  These beautiful desert plants, are not what usually come to mind when you hear the word desert.   Sounds like a wonderful place to visit.