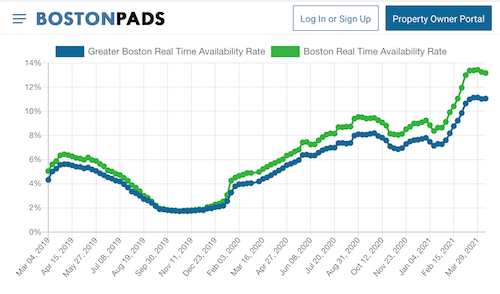 Harvard, BU, Northeastern, UMass, Tufts, and MIT have all made announcements of their plans to either scale down or phase out remote learning for the Fall 2021 semester.  The much anticipated news is beginning to steady the apartment rental market in Boston, which has been plagued by vacancies as a result of a diminished student population.

The real-time availability rate (RTAR) in Boston peaked at 13.56% in March of this year as Universities began releasing their plans.  That peak marked a 159.7% YOY increase in apartment availability from the same data in 2020.  It has since leveled off and come down to 12.75% as the news has restored demand for off campus housing in Boston.

Typically availability peaks in Boston from March to April as it coincides with the latter half of the Spring 2021 semester when students typically notify their landlords of their intent to vacate at the end of their lease.  However in 2020, apartment availability continued to climb as schools announced their plans to implement remote learning, effectively putting a chokehold on the off-campus housing demand that typically brings availability down to it’s cyclical low point in the fall.  Instead in 2020, availability peaked in September as student leases expired with no new tenants moving into their place.

The surge in apartment availability continued and even accelerated through the first 2 months of 2021.  Major schools did not make their announcements until mid-March, which forced many early September apartment seekers to wait on the sidelines until the news broke.  Since the announcements, we’re seeing a much needed injection of demand into the neighborhoods like Fenway, Allston, and Mission Hill.

The apartment supply glut in Boston was caused primarily by remote learning, so the areas most adversely impacted by the trend were around local schools and Downtown.  In Boston, many of the area’s largest Universities are concentrated near the Charles River in Back Bay, Fenway, Symphony, Mission Hill, Allston, Brighton, and Cambridge.  Because they are located so close in proximity, this is where we’re seeing the the highest apartment availability.   Here are the Top 7 areas in terms of apartment availability currently, and their YOY change from 2020.

While it has been concerning to see these numbers as high as they are, it appears as if the announcements have temporarily restored some confidence in the rental market.  All of these neighborhoods have noted similar stabilization of apartment inventory that we've seen City-wide as the market begins to absorb some of the excess inventory. So following a year of uncertainty and market disruption, it appears like the apartment rental market in Boston will be making a move towards normalcy in 2021.  The news brings relief to local landlords who have been sitting on vacant inventory since the pandemic hit.  Rent prices have taken a hit over the past year, but many landlords were able to offset this trend by offering more incentives to local renters.

Look for apartment prices to level and even begin to climb in some of these areas like Fenway and Back Bay where the average rent price has dropped 7% in the past year.  Demand won’t likely get hot until the summer, so look for some of the incentives for apartments in the areas to last a few more months until the end of Spring semester.  Renters could still find deals, as Boston Pads reports that 37% of apartments are still offering to pay either all or a portion of the broker fee.

Still some questions remain as to what the fall will bring Boston in 2021.  While remote learning has been almost completely removed, questions surrounding international travel restrictions and vaccination requirements remain, and still could present a challenge to Boston’s student population returning to normal.  We won’t know these answers for a few months, but this news still goes a long way towards ending some of the rental supply issues we’ve been experiencing.