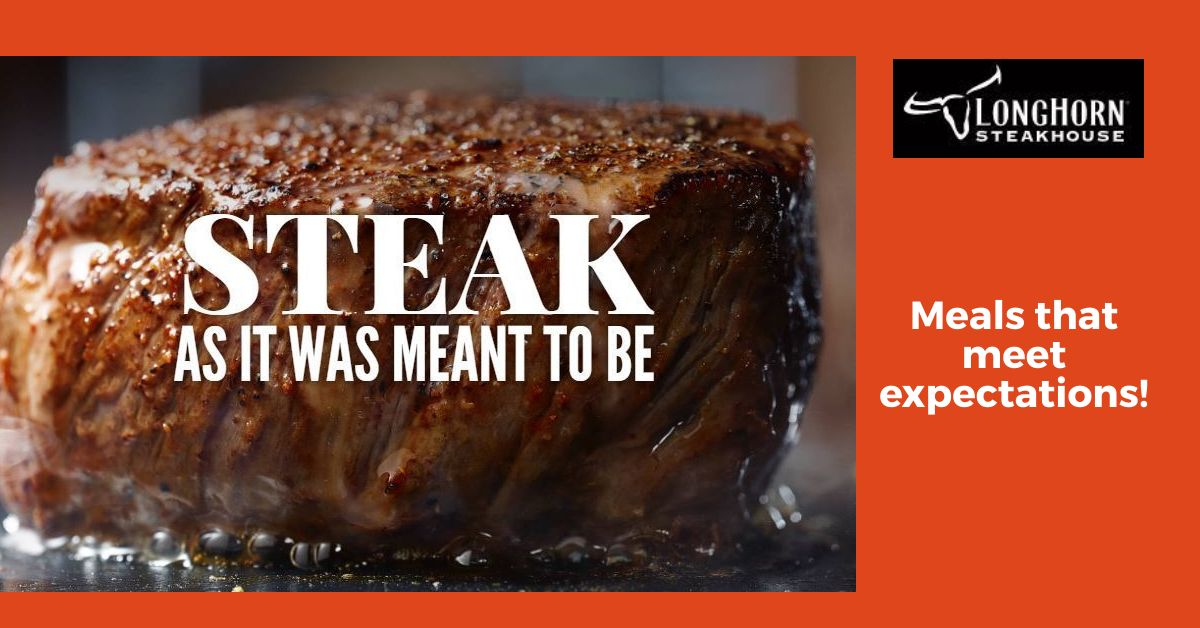 All over Atlanta Buckhead Midtown, the Greater Atlanta Metro area and at over 500 locations across the US as of 2020, Longhorn Steakhouse offers truly tasty foods in a wide variety of selections.

In 2017, Longhorn Steakhouse opened in the city of Guayquil in the country of Equador. Not only in the US anymore!

After the year or more of caution about eating inside restaurants, memories of favorite places may become stronger and the pull to re-visit a special restaurant may prevail. Fortunately, at the Longhorn Steakhouse, attention to health concerns was front and center along with the food! Check it out ... In 1981, George McKerrow, Jr. opened the first Longhorn with his friend Brian. Located on Peachtree Street, SnowJam '82 put the restaurant in the spotlight headed towards success. Weather at -2 degrees was much colder than Atlanta had experienced in many decades. For only $1.00 during the storm, he served signature alcoholic beverages that became VERY famous! George's hospitality to dozens of stranded motorists guaranteed lots of stories about the restaurant.

The original Longhorn was located just behind the station wagon in the photograph above. Tables signed by patrons over the years at the first location now host guests at the Buckhead new location of the FIRST Longhorn as the staff are proud to point out! Salads and Vegetables - One Each of Many ... Main Event - And Many More Options... Last But Not Least - Desserts! Bottom line? Returning to Longhorn Steakhouse proved a success. Each food item matched the memories and excelled in taste.

What is that saying? A good time was had by all!

EDITED just for you --

You can enjoy the shrimp or salmon while I enjoy what I like!
See you there - Lynn

Good morning Lynn - Phyllis and I love going out to Longhorne Steakhouse.  We have not done it since Covid.

Thanks for stopping by!
I enjoyed it twice - at dinner and the next day for lunch!
Take care - Lynn

Hello Lynn - although it is a well-known restaurant known in many cities across the country, you have given Longhorn Steakhouse a community feel.

Yes, it is actually community-like. Thanks for your kind words - as usual. Always appreciated! Lynn

Good morning Lynn. When I lived in Ft Myers Florida, it was a regular stop for lunch and dinner. These days not too much red meat. By the way their Salmon Was excellent. Enjoy your day

Hi Wayne -
The salmon was a favorite of my husband;s as well.
Added the photo above!
All the best - Lynn

We have Longhorn Steakhouse in my area too, I have been there and enjoyed some nice meals.

AGREED!
Hope you are well, Lynn

Hi Lynn... your photos had my mouth watering! Longhorns sounds like my kind of place.

Lynn I have eaten a number of times at Longhorns, but never new their history.

HI George! You know why I like it now - Atlanta native! Lynn

Hi Lynn- Larry and I would go to the Longhorn Steakhouse often when we lived in Florida. Of course, I immediately scrolled down to the desserts!!!

That shows your good sense. I subscribe to the theory that
"Life is short - Eat dessert first!"   Nice to see you here - Lynn

Man, I would love to visit Atlanta when I have the chance after this is all over! ;

I love a good restaurant these days and I want them all the flourish as best as possible. ;

I believe I had dinner there years ago while visiting a friend from high school.