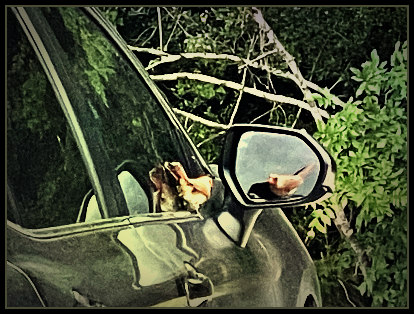 Wordless Wednesday...Rumble in the Park

The other morning as we were beginning our walk at Kickerillo, we saw a female cardinal going at it with...herself...in the car mirror.

I’ve seen this before when we were in Delray Beach, except the bird was much larger...a peacock fighting with the other peacock he saw in the shiny black SUV.

Some birds are territorial especially during mating and nesting season, so when they observe what may be a threat...they do what many might do...they break out the gloves.

By the way, this cardinal did this several times and when I returned the next day, I saw her going at it again.

Good morning Kathy! Yes, part of the joys of Spring is observing the animal behaviors. My favorites are the hummingbirds

It is fun watching the antics of birds.  I miss my birds.  Just have a variety of sparrows around. Although I do have a hummingbird.

Near our feeder, it can get testy when  young male will try t sit down with a female and her mate.  They are very loyal to each other.

Hello Kathy Streib it is amazing and fun watching animal behaviors are part of nature beauty.

Wayne Martin it doesn't get much better than that.

Nina Hollander, Broker we never know what we're going to see and that's what makes it fun.

Ron and Alexandra Seigel that is when it really gets interesting.  Animals are very protective when nesting.

Bill Salvatore - YVP Blog I should find my video of the peacock and the car mirror.

Michael Jacobs exactly!!!  No commercial interruptions although some of what I've seen could be considered X rated.

Grant Schneider if we only took the time...right!

Kat Palmiotti maybe. But it's nesting season and they get protective and territorial.

Rocky Dickerson I love them too!!!  We had a few this morning.

Hi Roy Kelley and I wish the same for you and Chef Dolores.

Sharon Lee I'm glad that you have hummingbirds!! Baby bluebirds should hatch soon.

John Pusa I agree. I have so much fun watching them.

That's pretty funny, Kathy, and I love how you were able to capture these birds in action. We see birds at our windows occasionally, fighting with "that other bird" but I've not been successful with getting a photo.

Kathy isn't it fun to watch all the little moments in nature while out walking!! The bird sure was going after himself!!

Hi Kathy Streib - I love this time of year because of all the birds and animals going through these "rituals".  We recently relocated a birdhouse because it never had any "renters".  So low and behold, I heard a frantic mama flying around me when I was near the birdhouse.  I am so happy that there is finally some renters! I think they are sparrows.

Kathy I don't know what to think.  You go around watching birds having sex ..... hummmmm.

We've had that problem with male cardinals going after their reflection on our windows, but not females.

It's a wild time of year for much of nature.  This morning, while sitting in the spa after swimming laps at the health club, I watched a Blue Jay tear apart an old nest of other birds, to get nesting material for a nest it was building.

Hi Kathy,  We may never know what goes on inside a bird's mind - but they sure are interesting to watch.  Thanks for sharing.

The only thing I can come up with is bird brain,  Sorry, but my mind is not fully funcitional early this morning

Kathy I have never ever seen anything like this before...loved the video and the explanation too, Endre

Animals are so interesting to watch. You never know what they will do. Great video!