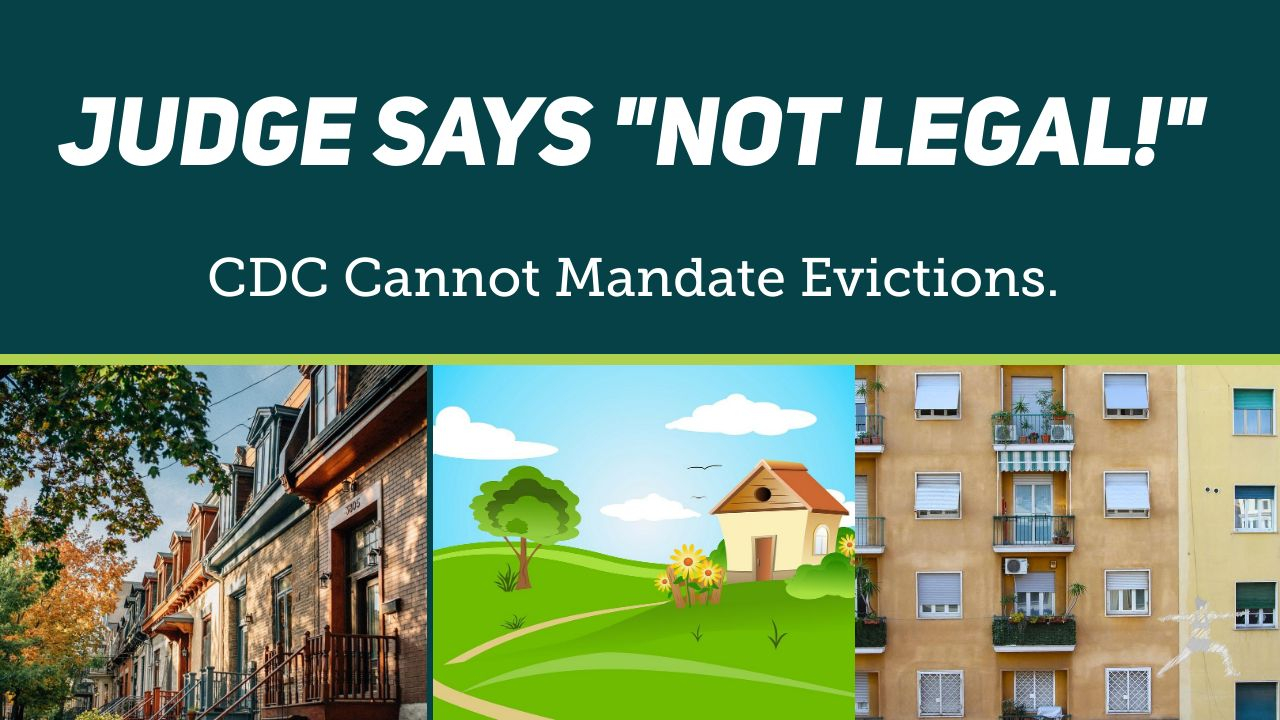 In Atlanta, Buckhead, Midtown and the Westside, as well as all over the United States, a federal judge in Washington, D.C.  "vacated", that is, struck down, the CDC mandated nationwide Eviction Moratorium on Wednesday, May 5, 2021.

U.S. District Court Judge Dabney L. Friedrich, of the District of Columbia, announced the decision in a 20-page document saying,

“It is the role of the political branches, and not the courts, to assess the merits of policy measures designed to combat the spread of disease, even during a global pandemic. The question for the Court is a narrow one:

"Does the Public Health Service Act grant the CDC the legal authority to impose a nationwide eviction moratorium? It does not.”

Therefore, the capacity to order an eviction moritorium

"now stands — and falls — on the text of the Public Health Service Act alone. ... The national eviction moratorium in the CDC order is unambiguously foreclosed by the plain language" of the PHSA."

The full Opinion, available via this link, has been made public .

In general, the plethora of regulations about Evictions and Stay Orders at this time creates a climate of confusion. The ruling does not extend to state or local Eviction Orders.

The NAR has been involved in the law suits on this topic as have many representatives of apartment complexes and individual home owners.

The economic bottom line rests on the confusion of the situation and the conflicting regulations. Others are effected besides the holders of large numbers of properties. Many Landlords hold a small number of properties whose earnings serve as their "salary" or their retirement income. These people are at risk of Foreclosure on their holdings because of the chaos in regulations.

The Biden Administration will challenge the ruling as announced in a statement released by Brian M. Boynton, Acting Assistant Attorney General for the Justice Department's Civil Division:

"The CDC’s eviction moratorium — which Congress extended last December and the CDC later extended through June 30, 2021 — protects many renters who cannot make their monthly payments due to job loss or health care expenses. Scientific evidence shows that evictions exacerbate the spread of COVID-19, which has already killed more than half a million Americans, and the harm to the public that would result from unchecked evictions cannot be undone.

“The Department of Justice respectfully disagrees with today’s decision of the district court in Alabama Association of Realtors v. HHS concluding that the moratorium exceeds CDC’s statutory authority to protect public health. In the department’s view, that decision conflicts with the text of the statute, Congress’s ratification of the moratorium, and the rulings of other courts.

“The department has already filed a notice of appeal of the decision and intends to seek an emergency stay of the order pending appeal.”

For all the honest, honorable Tenants who are just trying to survive until their employment returns, the situation is very difficult.

For all the Property Managers who have had to witness Tenants destroying rental units with no recourse to stop them via Eviction, the situation is equally difficult.

Lynn B. Friedman CRS Atlanta, GA 404-939-2727 - so many changes to laws and regulations. People are confused. You do a great job educating, correcting, and informing the public. You truly are an asset to your community and especially to the AR Community! Thank you for always looking out for us.