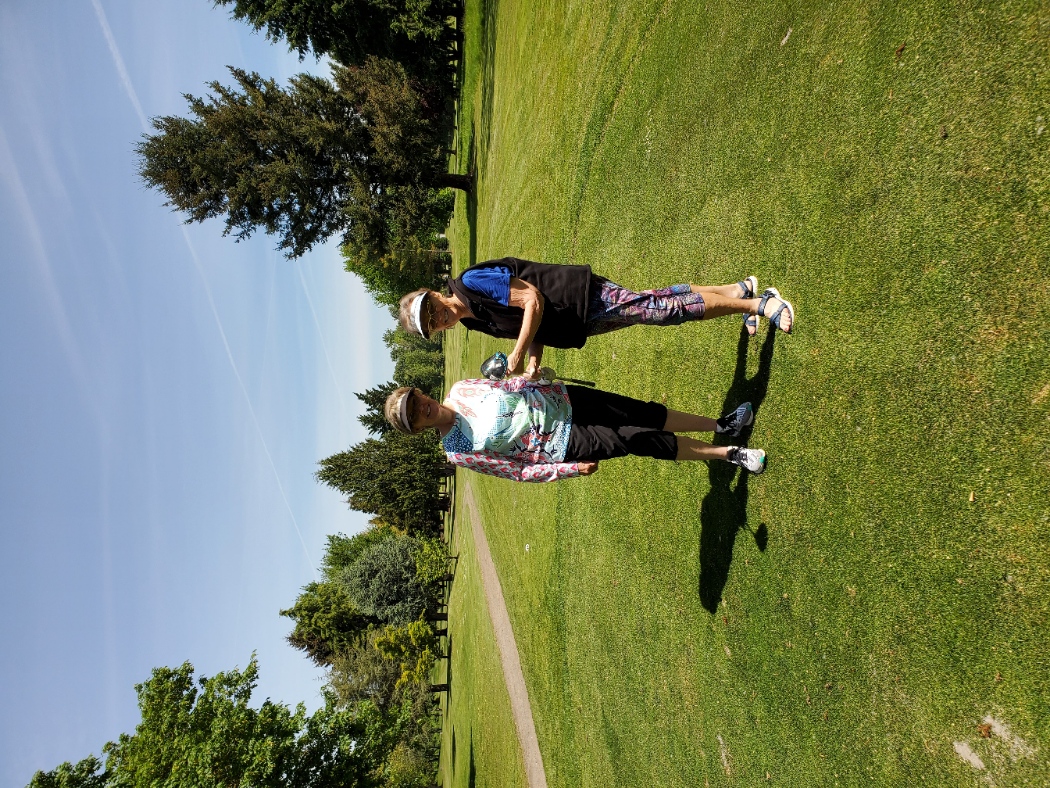 We departed Lincoln City on Tuesday morning, with a destination of Eugene, Oregon.  We meandered down the 75 miles to Florence, Oregon before we took Hwy 26 east for the final 60 miles to Eugene.  We stopped in Florence so I could get a hot vanilla latte and Gail could get an ice cream cone. I had been to Florence many times in the past and knew exactly where to go so we could both get what we wanted within steps of each other. After getting our treats,  we had hoped to wander around the town a bit but it was a bit windy and chilly so we headed to Eugene. I was excited for this leg of the trip for a couple of reasons. #1 I have a couple of cousins in Eugene that I was looking forward to seeing and #2 I was on the hunt for a new golf driver.  I had two different friends tell me Fiddler's Green Golf Center in Eugene is the place to get fitted for new golf clubs.

We arrived in Eugene early enough to check into our hotel at Valley River Inn and still have time to head over to Fiddler's Green. We spent quite a bit of time there and Gail and I both bought new drivers. On Wednesday we had a tee time at River's Ridge Golf Course. It was only a 9-hole course but looked nice and had good reviews. It was a fun course to play and we ended up joining up with a single guy who had played the course before. That always helps. We played two 9-hole rounds which was a good thing good because we had a better idea the second time around how to play the various holes, even though we were getting a bit of guidance from the local. It's always challenging playing a new course the first time.  Actually, golf is ALWAYS challenging, not just the first time you play a course. 😃 After golf, we went to visit with my cousin Linda and her husband, Mike. It was super fun catching up with them over beverages and a nice meal on their patio.  Linda and Mike have an amazing backyard and I can't even fathom the amount of work they've done there.

You can see only a small portion of it in the background of the picture. I know how expensive landscaping is and they've done ALL the work!

Linda is the granddaughter of the Aunt & Uncle who raised my brother and me after our parents died. Linda's Mom is like a second mother to me. Linda's brother, Kevin, is the one I played golf with a few weeks ago. I made a post on Facebook about that.

Sadly, I wasn't able to make connections with my other cousin, Shirley, during our visit.  We had some communication issues and conflicts that got in the way.  She is our family historian (on my Mom's side) and always has fun pictures and stories to tell during our visits.

And the adventure continues to evolve. Gail and you are having a wonderful time and I am enjoying the armchair view.  I have not heard of Shingletown, CA, and I am looking forward to that one.  A

Hello Carol,  These posts are so much fun to read.  It brings a smile to my face knowing that you and your friend Gail hit the road for some adventure, playing golf, and visiting with family.  Too bad you could not connect with your cousin, Shirley.  Maybe next time.

Hi Carol well you two look like very happy ladies with your new drivers on the golf course!  Such a fun, relaxing trip.  Love it!!

What a fun trip you both are having.  The adventures continues.  Safe travels.

Good morning Carol - sound like you are having a great vacations and I am enjoying vicariously.

Carol I am not a golf expert, but those look like TaylorMade Sims 1 or 2 clubs.

Hello Carol - I missed a couple of days of reading ActiveRain posts as I escaped for some long-needed(or is the term:  always-needed?) mental health days so I am happy to see you and Gail's wild ride continues.  And what a drive it is. . .  Wheeeeeee. . .

I'm playing Sunday afternoon, not totally giving up on the game, but we'll see

Hi Carol... I've enjoyed reading about your travel adventures... feel as if I've been right there with you throughout the trip. And of course, love seeing the photos.

I always enjoy hearing about your adventures and seeing the pictures of smiling faces!

Thanks for taking us all along with you on your travels - sounds like a terrific trip with all kinds of things to see and do. Must have been fun to get in those 2 rounds of golf!

I have a dear friend, with a sister who lives in Florence.  He speaks of it often.  I've been to the Oregon coast, but I don't believe I've ever been to that part of it.

I'm enjoying the trip! It's like being with you!

I think this is the only stop I missed taking with you. Fun to see how much you enjoyed your travels. Your cross country trip is going to be epic!