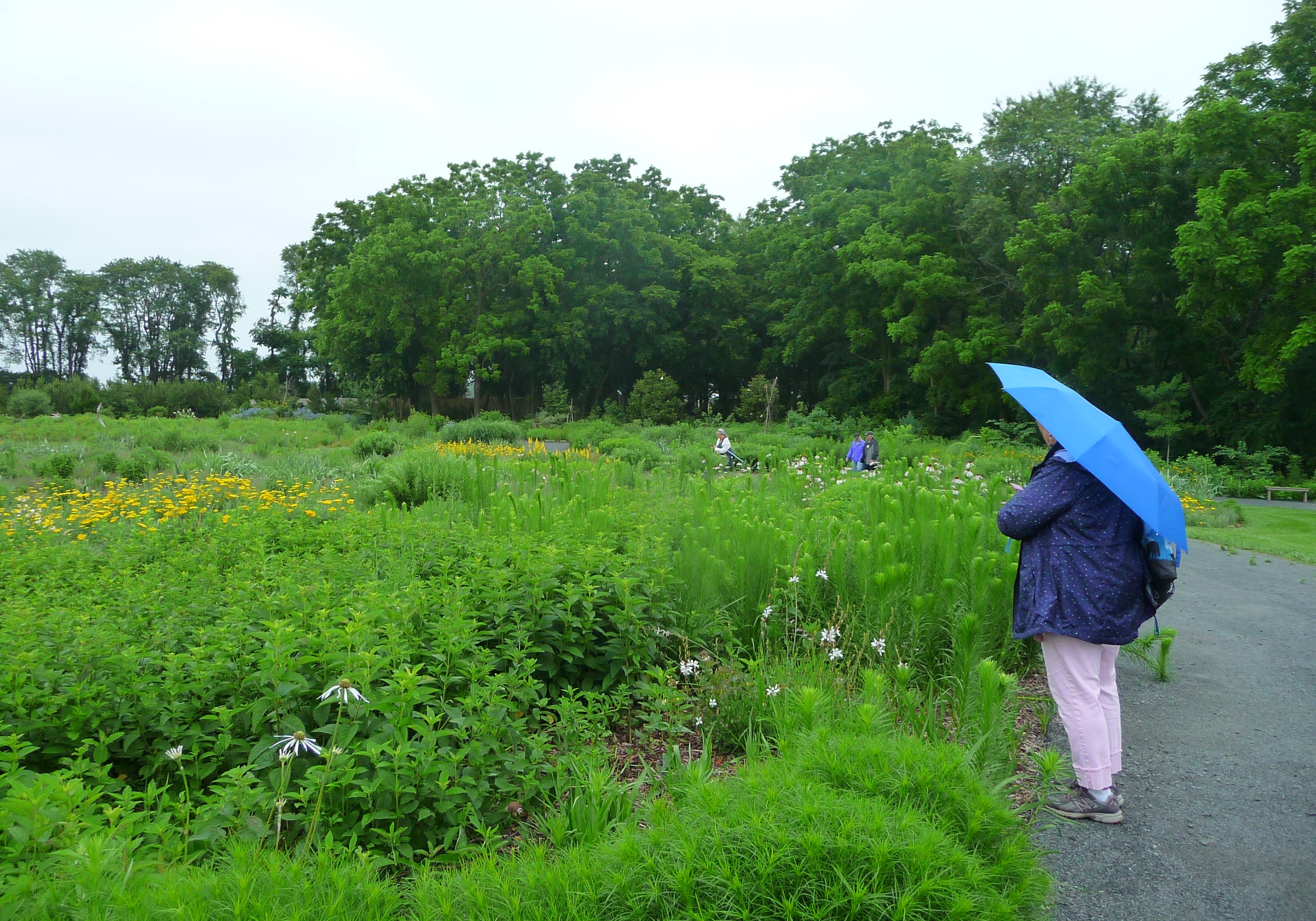 When I say, "Botanic Garden in Delaware," you may be thinking something on a duPont estate in the northern part of the state.  Well, downstaters decided to do something to remedy this assumption. In early 2012, a group of energetic and garden-loving men and women came together under the leadership of Michael Zajic, former horticultural supervisor of Brookside Gardens in Maryland, to fill an unmet local need for horticulture education and gardening resources.

I had a chance last week to visit the new Delaware Botanic Garden in Dagsboro, Delaware,  in only its 2nd year open to the public.  We chanced to meet of Horticulture, Stephen Pryce Lea, who told us that the Sussex County Land Trust's site on Pepper Creek, preserved as open space, has been leased to the Delaware Botanic Gardens for $1 a year for the next 99 years (a renewable term). This mutually beneficial arrangement reflects a remarkable partnership between two nonprofit organizations with compatible missions. The public will benefit richly by having access to the natural beauty of this topographically significant site along an estuary of one of Delaware's Inland Bays.  Lea emphasized that none of this would be possible without a couple of hundred volunteers. (photo:Thistle)

Situated on thirty-seven acres along Pepper Creek, which flows into Indian River Bay, the garden will maintain a year-round living habitat to demonstrate the vital impact of plants on the lives of our region’s citizens and their environment.  This significant site, valued at $1.3 million, is located on the gently rolling, verdant, sandy coastal plain.  A rare hill with an existing twelve-acre hardwood forest slopes down to a wetland marsh and more than 1,000 feet of waterfront along the broad, navigable tidal creek.

Planting areas include the Meadow Garden (first photo), Woodland Edge, the Knoll, the Wooded Wetland Garden, and the Great Wooded Wetland. The paths are all neatly tended and lined with natural materials, and being lower Delaware, very flat. A folly garden gave room for the designers to add some fanciful touches.

We were given a map which showed future garden areas, some of which were between the meadow garden and the parking lot. They plan to be adding areas and plantings for the next 10 years, so it will always be worth a return visit to see the changes. The woodlands and shore are areas that were already present, but the wetlands were designed with natural materials to prevent nutrients from washing out of the forest and farmland into the creek. And when I say creek, it really looks like a small lake when you get close to it. So if you are visiting Delaware's beaches, take a small detour to this out of the way garden, for sure!

How beautiful and tranquil the Delaware Botantic Garden in Dagsboro is, Carolyn.  I love those scenes.

CONGRATULATIONS Carolyn, on having this blog FEATURED in the PHOTOS group!

Myrl--Thank you for featuring this tranquil garden. A perfect description!

Hello Carolyn - thank you for the introduction and the tour of the Delaware Botanic Garden in Dagsboro.  I also appreciate the term - downstaters - that is helpful in identifying the area a bit more. The map you were given is also key to the progress that has been made as well as future plans which seem to be extensive/exciting.

Thanks, Michael. It really was resourceful for those "downstaters" to create a completely unique garden utilizing their area's natural features and amping them up several levels.

Every body is a winner with the Delaware Botanical Gardens in Dagsboro as the beauty of nature will be on display for all to appreciate.

Good evening Carolyn! Looks like a wonderful place to spend some time and enjoy

Rocky--definitely a place away from the busy world!