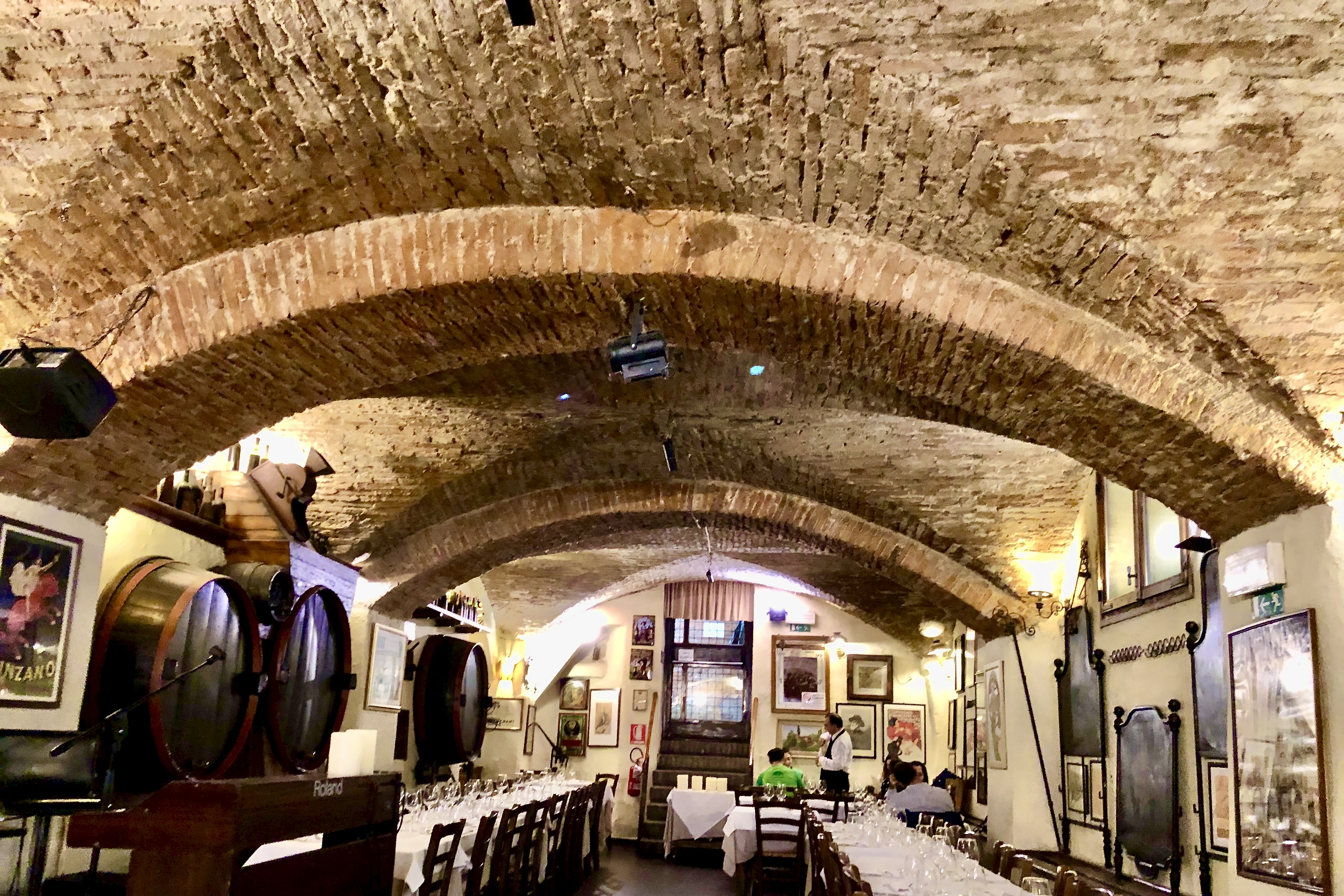 Pictured above is the dining room of one of the oldest restaurants in Bologna.  It was recommended by a brother of a friend we met in Milan.  According to the brother this is a place for avowed foodies. Pictured above is the entry door, which says from 1600. Even though it was a rainy day, we marveled that within 15 minutes of when we were seated the place was filled. We were the only Americans there.

The restaurant is located in the former wine cave as this was originally a home with the winery below in the late 1500's. The building in on an ancient narrow cobblestone street, wide enough for one car to pass. Every aspect of the meal was exquisite as was the wine (pictured above) that the waiter recommended.  One of the many highlights was a Parmesan cheese flan with a Porcini mushroom sauce.  To this day, I have searched to find a recipe for it, and I have not yet succeeded.  Guess that means, we have to go back to Bologna!

I wonder if you wrote the restaurant and asked them for a recipe? With a little luck you could be making it soon  :) (with photos for the rest of us, of course)

Myrl Jeffcoat it was a wonderful experience, and I would love to go back to Bologna.  I have been there before once with my mother and her friend and once before this trip with Ron and a friend.  The city has one of the oldest universities in the world, and is beautiful just to walk around. A

Jeffrey DiMuria 321.223.6253 Waves Realty I think I would just love to go back instead of writing for a recipe.  I have made French recipes and the translation of measures and ingredients is quite tedious and does not come out as pictured. A

Kat Palmiotti Thank you for looking up the recipe. That is so nice of you. The photo is different than what we had.  I can basically figure out the ingredients, but where I get stuck is translating the measures into our cups and ounces.  I have used the translator and it comes out in decimal points.  And I have approximated, and the result was OK.  Maybe next time, we are in Europe, I will buy some measuring cups and tools there to bring home.  A

That is a great idea!

Kat Palmiotti you inspired it!

Brian England It is not above your pay grade.  It was not an over the top place, it was genuine Bolognese food.  If you can afford a Tesla, you can afford to eat there.  A

Brian England we test drove the Tesla, and two of our friends drive them...so I know a lot about these cars. We almost considered one, and then fell in love with the coupe.  A

Wayne Martin we ask every concierge at every hotel we have been to, where do YOU go for a meal.  In Rome, we had the same experience as you did.  And when we wanted a celebration meal, Ron asked, where do you take your wife for a special dinner...Everyone in Italy exceeded our expectations...and the same is France.  Happily my French is fluent, unlike my Italian, I need to learn more before the next trip.  A

A - That is a fantastic question to ask the concierge. Thanks for the tip!

Nina Hollander, Broker It was memorable, and every place we went to had so much character and atmosphere...A

Lawrence "Larry" & Sheila Agranoff. Cell: 631-805-4400 we marveled at how long the place has remained intact.  The old Romans knew what they were doing.  A

We are looking forward to going back. A

Grant Schneider we are looking forward to going back there.   A

If you ever find that recipe, I hope you share it.  It sounds delicious.  The meal and the experience must have been amazing.

Thank you very much for sharing your travels.

Hello A and Ron,  Nice looking place and a place I would like to have dinner with both of you!

Hi Ron and Alexandra Seigel - What a wonderful memory you shared with us about Italy.  I still remember a special place in Venice where we dined on the side of a canal.  I do want to go back and explore Sicily and the southern coast of Italy.

Hi Ron and Alexandra- if we're taking votes, mine is for you two to return and get that recipe!!!

Raymond Henson, eXp Realty I am planning to return, and hopefully I can talk to the chef...and we have a chef friend in Cinque Terra that could probably share the recipe with us.  I just need European measuring tools.  A

Roy Kelley it is always fun to go down the road to memory lane, and we have so many wonderful memories. A

Will Hamm we would enjoy dinner with you, and I know how much you like to cook.  A

Sheri Sperry - MCNE® Sicily is wonderful, we would recommend it, and then you can also visit the Aeolian Islands, on our list to see.  We loved Taormina, because it was reminiscent of old Italy and the Greek influence outside of Taormina.  Palermo is just another big city...Also Sardinia is worth a visit...A

Kathy Streib Thank you for the vote, we are thinking of next year to return during Porcini Season.  Before that Champagne is on our list.  A