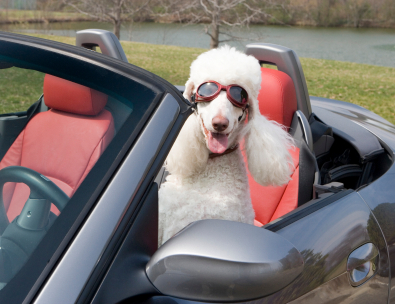 Let me start with a big THANK YOU to Patricia Feager, MBA, CRS, GRI,MRP who reminded me that today is Bastille Day.  I have a huge appreciation for France.  It is part of my native soul. This file is a work of an employee of the Executive Office of the President of the United States, taken or made as part of that person's official duties. As a work of the U.S. federal government, it is in the public domain.

Bastille Day is the common name given in English-speaking countries to the national day of France, which is celebrated on 14 July each year. In French, it is formally called Fête nationale and commonly and legally le 14 juillet. Wikipedia

Hello A and Ron and Thank You for sharing both of these pictures with us here in the Rain.  Make it a great day!

Will Hamm Thank you for your comment.  We are celebrating the day, and just bought a nice wine.  A

Hi Ron and Alexandra- I love both photos...the whimsy of the poodle and the majesty of the jets.

Hi Ron and Alexandra,  Thanks for sharing these pictures and the information.  So important to keep close to your native soul.  Enjoy the day!

That is a great picture.  Must be breath taking to any who have experienced it in person.  Thank you for sharing, Mark.

Ron and Alexandra Seigel -  I know you appreciated the reminder and it was very kind of you to mention me.  I hope you enjoyed the day as much as I did. I went out and celebrated and added photos of the celebrations I attended.

Always fascinated by the different languages, around my area mostly Spanish.  Wish I was bilingual, but it was not meant to be

Hello Alexandra and Ron - while I knew of your personal French Connection, I am impressed to learn of the talent expressed by Pete Xavier.  You, and by that I mean I, can gain so much knowledge by reading the comments of other members.  I am sorry that time doesn't always allow me to do it as much as I could.   Treasures can definitely be found while wandering around ActiveRain.

Not that proficient in French, I must confess! Thankfully my computer and the internet helped me do something fun and clever.

Thanks, too, for sharing your photographs.

I love the photos! Thank you for the reminder about Bastille Day.

Kat Palmiotti Thank you for your comment,  We had a good time celebrating the memories. A

Roy Kelley Thank you for stopping by.

Michael Jacobs Thank you for noting Pete Xavier French savvy.  I was very impressed. A

James Dray James, languages are best learned as a child, and I was fortunate.  A

Patricia Feager, MBA, CRS, GRI,MRP We bought a lovely French wine for dinner, and then went next door to our French chocolatier and bought two chocolates for dessert. A

Mark Don McInnes, Sandpoint I am sure the place was crowded, and yes, it would be fun to see it in persona.  A

Bob Crane another reason to celebrate is always fun.  Happy Friday to you.  A

Pete Xavier "mauvais vin" is never served here.  I am impressed with your French.  Happy Friday and have a great weekend.  A

I give full credit to the power of the internet in finding that clever vin/wine phrase.

Kathy Streib I am a fan of whimsy, and that crazy poodle photo always makes me smile. Happy Friday.  A