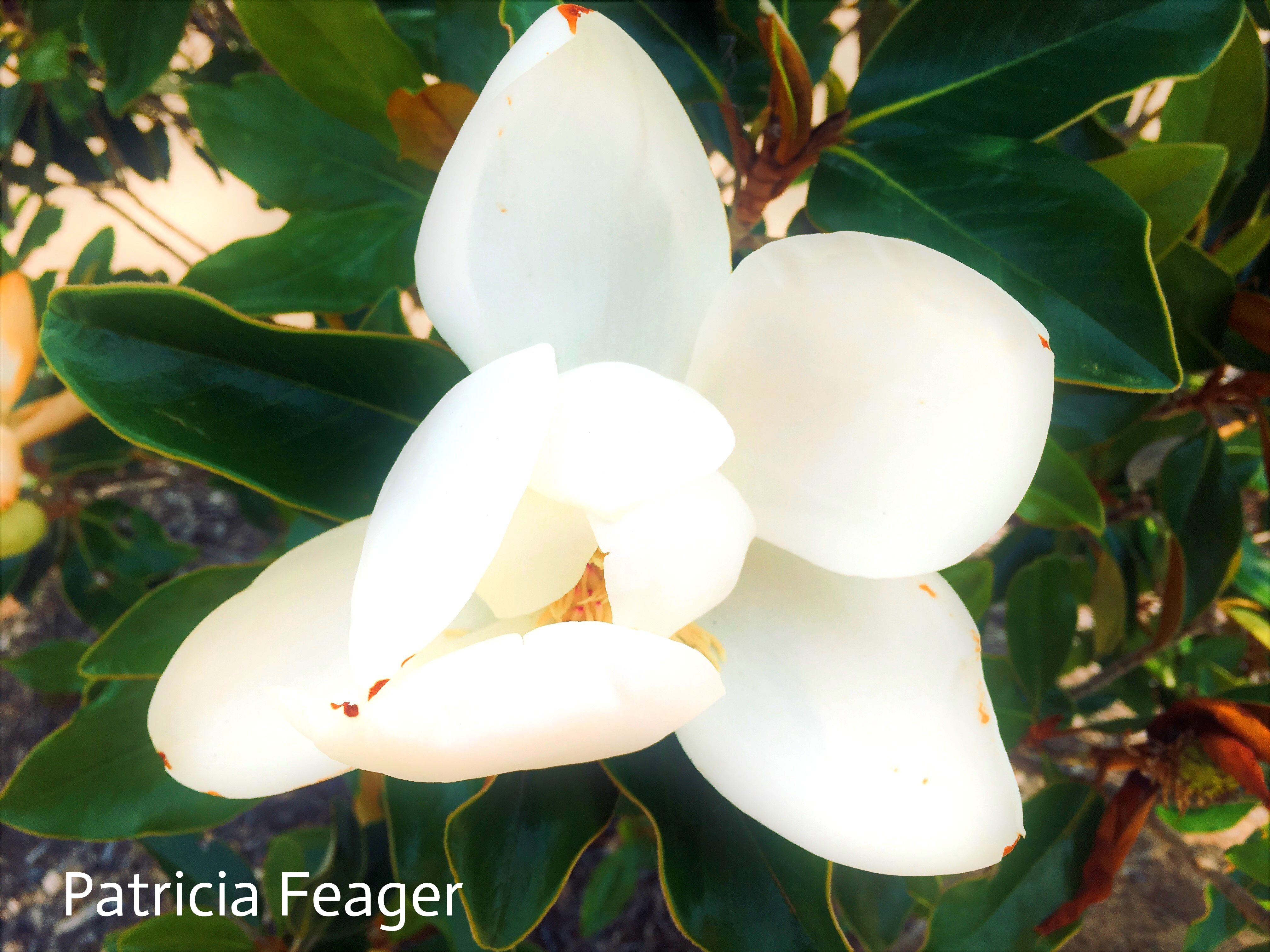 To be yourself in a world that is constantly trying to make you something else is the greatest accomplishment.

What does this quote by Ralph Waldo Emerson have to do with you and  your 'greatest accomplishment'? I pondered this question after watching a 1978 film last night called "Ice Castles". It was a film about a true story of Lexie Winston, a very young figure skater from Iowa who rose quickly to stardom and felt the pressures of becoming a super star with the elites while being shunned by her peers until she made one drastic mistake that left her virtually blind with just enough vision to see the boards at the edge of the rink. At the end she learns to overcome her disability and trust in herself again. Unable to see she skates once more but forgets about the roses thrown to her at the end of her performance and falls from grace. That's when the audience realizes, she was visionally impaired. (Source Wikipedia)

I chose a photograph of a Magnolia to illustrate true beauty and the possibilities of continuing to bloom under any circumstances. Just as most of us were feeling comfortable about taking off our masks there's talk about implementing them again. Whether or not anyone has the power to make us go down that path again masks belong to the mythical arts of drama and storytelling. It really is important to be yourself!

It's amazing how many stories have been told about Olympic Champions, athletes, or filmakers. Isn't it funny how history uses people and life dramas to make a point about perseverance? Tragedy seems to serve as models for both social changes and the psychological effect it has on life and other people. It's true, the world is always changing. Life is a combination of both success and failure, and the joy and disappointments we live through whether temporarily or permanent ---Patricia Feager

Good morning, Patricia... magnolia trees are amongst my favorite... I always have a magnolia in my yards and am right this moment looking at the beautiful white flowers blooming on my magnolia from my office window.

Nina Hollander, Broker - I am very attracted to magnolias. There's a milky white freshness about them that cannot be denied! Your office window brings you gifts - how great is that!!!

Love that quote Patricia! Thanks for sharing!

To be yourself in a world that is constantly trying to make you something else is the greatest accomplishment.

Sham Reddy CRS - I'm glad you like that quote too! There's something special about the legacy left behind by Ralph Waldo Emerson.

Whet has come out during the Olympics is that to be successful one needs determination and not allow anything to change the focus that will lead to their success, or in this case a medal

Hello Patricia - each time I see or hear the message "Be Yourself" I can't help but think of Oscar Wilde and his words - Be Yourself Everyone Else Is Taken.

I admit, that thought came to me once again but I know it's not always so simple in practice as some may think. It takes "work" to achieve it on a consistent basis which brings me to works-in-progress.  There seems to be a quote for so many things in life that "fit".

It seems like the challenges in life are relentless and it would be easy to just give up.  There have been times....Perseverance is the key.  It is helpful to have inspirational friends around to keep you on the right path.  Thank you for the thoughtful post.

The magnolias are blooming all over town.  What a beautiful post, and I love this sentence, Life is a combination of both success and failure, and the joy and disappointments we live through whether temporarily or permanent -

Hello Patricia and thanks for sharing the picture with us and the quote today.  I have to remember the Ice Castle again.  There are always up and downs in so many things that pro's and even us go thru.

Patricia some people spend their lives pretending to be what others want them to be instead of who they really are.  It is more important to them to please others, instead of being true to themselves.  That is a very high price to be liked by others, and it is a price I am not willing to pay.  Like me for who I am, or move on to someone else.

Patricia my middle name is perseverance, I will just leave it at that awesome post and message, Endre

Ron and Alexandra Seigel - I view magnolias as one of the crown jewels in the flower category. They are as bright and beautiful as a diamond. Thank you for your lovely comment and letting me know how my last sentence was your favorite. That's important to me because recognition for my orignality and contributions here on ActiveRain should be acknowledged if it is meaningful to the AR Community.

Raymond Henson, eXp Realty - As a kid, I knew many people worked until retirement and received the company gold watch. Those days are gone and never applied in my lifetime for my generation. I find we live in a world were transitions occur very frequently for all ages. Managing these transitions is stressful and always includes new technology (which for many people is very stressful). Perseverance is a must and adapting to change (especially technology) will help. But if one doesn't catch on or adapt to the technological changes quickly it becomes more stressful to catch up. Some people, never catch up and then the only way to catch up is to delegate or get help.

You're a likable guy, easy to look up to. I appreciate your value systems and beliefs.

Ed Silva - I agree. Focus is the key. In recent discussions about the Olympics I'm finding the majority of media reporting the news says the most important thing for those representing the United States is to remember who they represent and what our flag stands for. If they don't agree, then they shouldn't participate.

Michael Jacobs - There certainly are a lot of quotes to be tossed into every type of conversation, blog post, book, or article written. When I'm unfamiliar with the author, I find out more about who the person is and what their ideology is. If it matches my values, I quote. Otherwise, I don't. Ralph Waldo Emerson is one of my favorites.

Will Hamm - I never got to see Ice Castles when it came out and wasn't aware of what happened to Lexie Winston back in 1978. The only thing I remember about 1978 was that it was very stressful when when Jimmy Carter was in office.

George Souto - Your comment is spot on. It's easy to become a people pleaser when you believe in obedience and loyalty. This happens a lot to people conditioned to think, that's the way to get ahead and that's how you make money. The race to succeed and earn more is a path many people take voluntarily or not. I agree, "it's a high price to pay." Plus, it also can lead to depression and therapy.

Endre Barath, Jr. - I am not surprised that "Perseverance," is your middle name. I could never imagine you surrendering.

Good morning Patricia Feager, MBA, CRS, GRI,MRP ! What a beautiful post and quote. Being ourselves can sometimes be quite a challenge, especially when our view, or our actions, are unique. I find it easier and easier to do as I get older!

I hope you have a wonderful day!

Kat Palmiotti - Thank you, so much! I completely agree, being ourselves can be challenging, especially when we are the ones who sets up our own conditioning that becomes a habit over time. Like you, I discovered priorities shift over time and it's okay to be myself.

I hope your day is special in every way!

I hope yours is as well, Patricia Feager, MBA, CRS, GRI,MRP !

Hmm, I think I recall watching that movie a very long time ago and while I don't remember much about it, it must have been good for me to remember seeing it, haha.  I don't think people can even fathom how much work goes into becoming an Olympic level athlete and the pressure that comes with being thought of as the best.

Brian England - I lived for a long period of time without a TV and didn't get to the movies when Ice Castles came out. Serious athletes, especially those training for the Olympics make many sacrifices and their family does too. They make a very serious commitment to their body, mind, and soul. You're right! There's a lot of pressure on an "Olympic level athlete.

We don't have any of those flowers by us, but the deer family would like them just as much as we would!

Lawrence "Larry" & Sheila Agranoff. Cell: 631-805-4400 - I'm sure you would enjoy them. I've never been to Long Island and it would be fun to see flowers where you live that I don't get a chance to see here. There's something about deer that I love very much. Have a nice evening.

I love magnolia's!  I used to have a beautiful magnoilia christmas wreath and I have no idea what happened to it over the years.   Challenges are part of life and personally I enjoy them.  It's always an adventure to get to the 'other side' and let the journey be the fun!  As for being 'yourself'.  Honestly I never got that one.  Who on earth would I be if I weren't me....I used to say that when I was young and people told me that!  There's a better way of framing that for kids!

Anna Banana Kruchten CRS, CRB, Phoenix Broker - a magnolia Christmas Wreath sounds lovely! I like things that are unusual. I once ordered myself a Christmas Wreath from Maine through a catalog covered in sea shells. It was stunning! Plus, in Illinois I was the only one who had a wreath like that! As for challenges, believe in your power and take bold steps. Never take no for an answer. Always go through it and don't look back!

There are those times in my life when perseverance is the greatest accomplishment.