My Life as a Clown 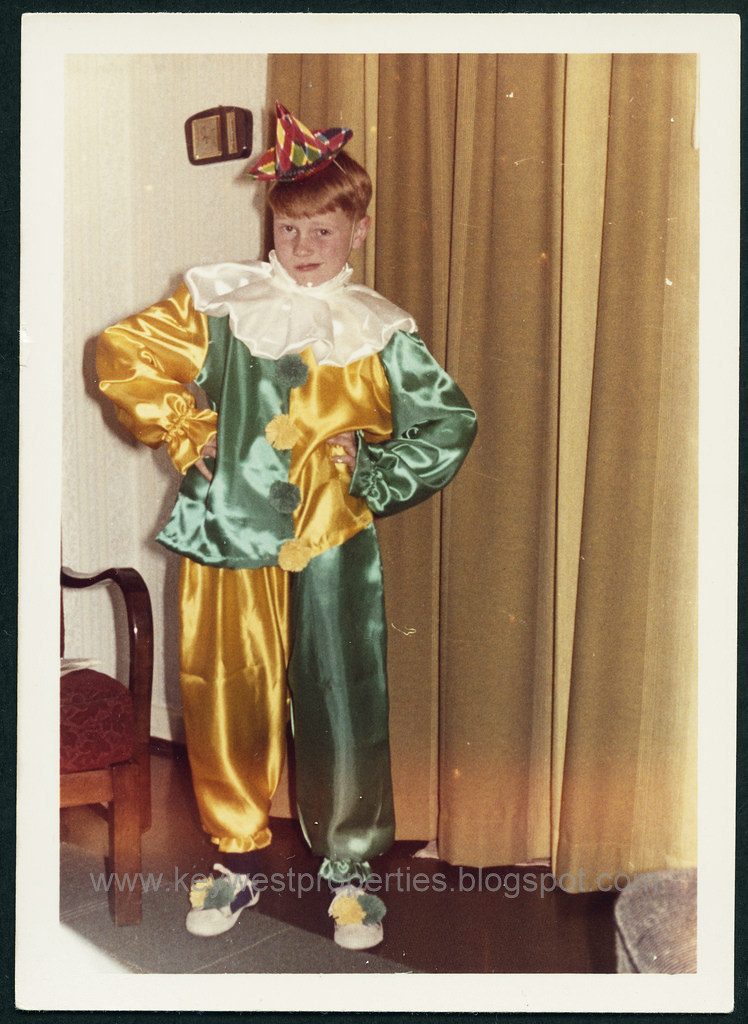 That's not me in the pic.  I looked as cute, but nobody took a photo of me back in summer of 1962 when I spent many-a-day as a clown.

I was fifteen years old and had a job at a furniture store in Denver where I made $1.00 an hour. Minimum wage was $1.15 back in 1962. I guess my employer thought that since I was young I didn't have the right to be paid as much as an adult. I didn't care. It was money and the work wasn't hard.

I worked at a furniture store on West Alameda Avenue in Denver. This was an area of town where nearby Morrison Road led to the home a couple of miles west where Jack Kerouac once lived. During the 1950s and 1960s this part of town was populated by lower middle to middle class families who would shop for furniture that fit their modest budgets. Back in the 1960s the furniture store sold three rooms of furniture for a few hundred dollars - total. I remember the furniture "suites" were offered in various styles including "Early American", "Danish Modern", "French Provincial", and "Italian Provincial".  The furniture was pretty cheap in retrospect, but it was what people of modest means could afford and it offered a bit of style plus utility.

There was a large parking lot adjacent to the store where the owner set up a huge green Army surplus tent to expand showroom space beyond the building walls. The tent was crammed with new and used furniture. Strings of bare light bulbs illuminated the space at night for shoppers. There was a night watchman that stayed in the tent to make sure nobody stole anything. Looking back I can't imagine anyone would want to steal anything there.

I would work from 8:00 AM to 5:00 PM five or six days a week.  In the early morning I would dust the furniture, sweep the floors, and assemble new pieces for display in the store. Sometimes I would help deliver furniture when one of the truck drivers was not present. Just before noon I would go to the bathroom and put on my clown costume, make-up and red wig with a flip-top mop that would raise a front patch of the wig to startle people. I would then go out to the front sidewalk and wave at passing cars.  There were many occasions when cars would stop and I would walk up to the car to say "Hi" to kids in the car. One day a car filled with teens stopped. One guy grabbed my arm and tried to put out a cigarette on my hand. I pulled it away quick enough not to get burned. It never occurred to me that someone would try to hurt me.  I am not wired that way. But I never extended my hand that way again.

After being a clown for a couple of years while in high school,  I went to college and later law school. I became a lawyer and later went into banking. I worked for the federal government where I worked on selling complex assets owned by the Resolution Trust Corporation until 1993 when I moved to Key West to own and operate a guest house. For the past twenty years I have been selling houses in Key West. Unlike a lot of agents with real estate licenses, that is the only thing I do.  I like to make buying a home fun but I no longer act the clown.  If you are thinking about buying a place in Key West, please consider using me as your Realtor.

Hello Gary - from reading your posts, I knew a lot of this information but your furniture store days/clown experience seemed to have avoided my recollection until now.  I do remember seeing the stores offering multiple rooms of furniture in an array of "styles" at an unbelievable price.  It was so low a kid might one day be able to afford - and at one dollar per hour, he might change his mind by the time he could save for that low down payment and monthly installment.  Peanuts were likely more satisfying.

Good morning Gary. What a career trail, especially your RTC days. Bet that was an interesting experience. Enjoy your day.

Wayne, We took down Lincoln Savings in Arizona. Our department managed the near two billion dollars in assets of about 20 subsidiaries and partnerships. We managed a group of private asset managers and worked with armies of lawyers and accountants to sell and dispose of those assets. That was just one part of all the assets we managed from across the western US.

We were not foreclosing failed home mortgages, but investments in hotels. golf courses, office buildings, development parcels. and so on. We had a nursing home in New Orleans, the Phoenican Resort in Phoenix,   a huge development in Boquest Canyon outside of Los Angeles, a tv station in Washington DC.

I loved that job. It gave me so much experience in so many different aspects of real estate, the law, litigation, planning.  We had several lawyers and asset managers from banks in Colorado that had prior experience to act as supervisors of all the contract professionals we hired. It was a great learning experience. And we really cared about how much money we recoverred despite the governments adherence to the rules. The rules made a difference. They always do.

I have to admit when I read the part about the guy who wanted to put his cigarette butt out in your hand I got royally pi$$ed. Some people are just evil. Now I have to go find something fluffy to read to get back my equanimity.

Hello Gary,  Did not know you livein Denver in the old days.  Can not believe someone wanted to but the cigarette out in your hand,  How rude back them.

Hi Will, It was Look Furniture at 2740 West Alameda. They waved and motioned me to come to the car. One kid reached for my hand with a cigarette in his. I yanked my hand back just in time.

Gary- you have had such an interesting background!!! After reading about the person who tried to put their cigarette out on your hand it reminded me that nutcases have been around a long time.