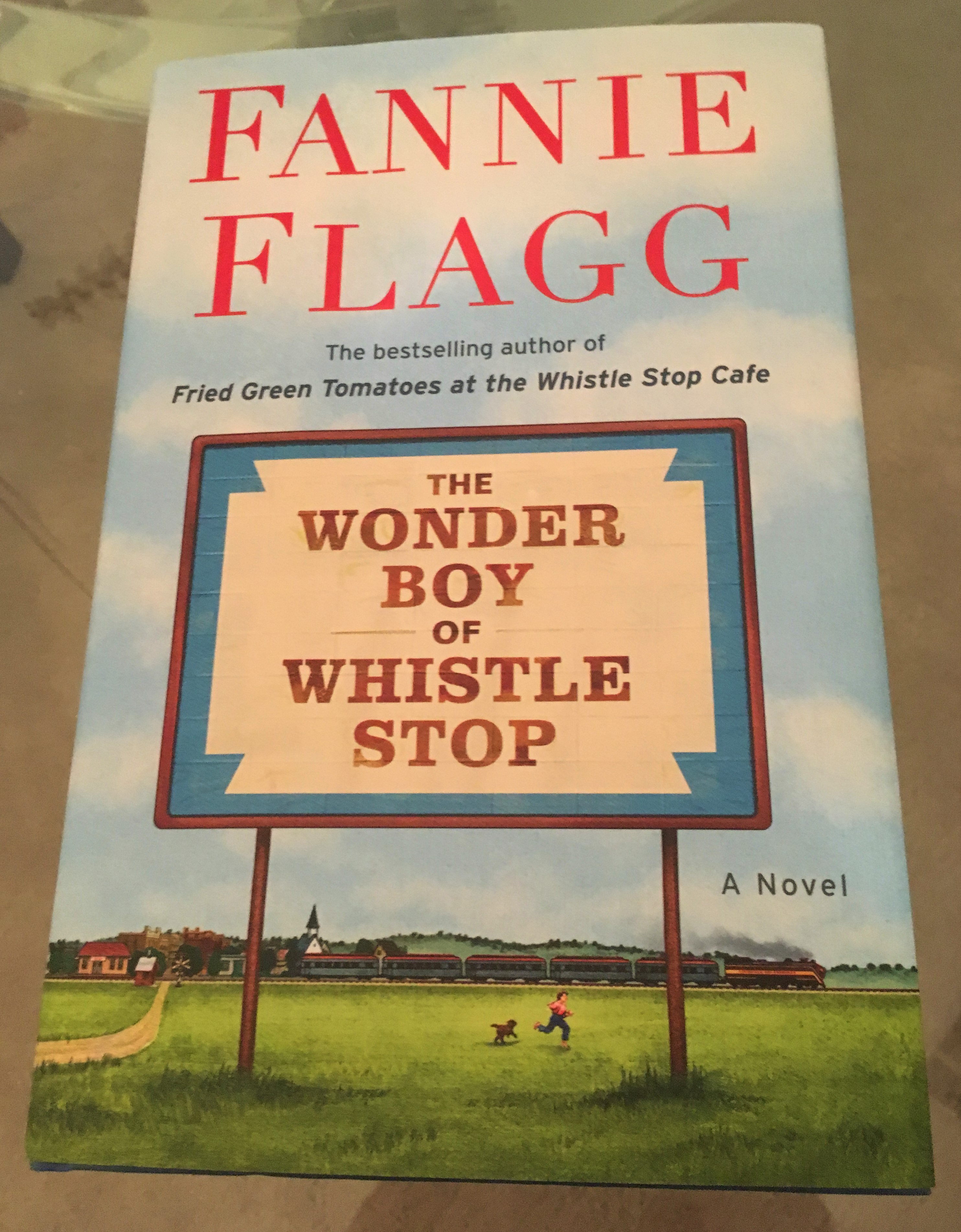 If you need a break and want to spend about an hour or two relaxing and reading a good book, I recommend "The Wonder Boy of Whistle Stop," by Fannie Flagg, author of Fried Green Tomatoes at the Whistle Stop Cafe.

The Wonder Boy of Whistle Stop is the story about Bud Threadgoode, the kid with the one arm, son of Ruth and Aunt Idgie. You'll be introduced to Bud once again but now he's married and has a child named Ruth. If you liked Fried Green Tomatoes, I think you'll love the sequel. It's an easy, engaging, and enjoyable story with some new characters added to the story about Whistle Stop. Below are some teasers written from the book that just might make you sit back and realize, we call come from somewhere. Maybe a small town with a place like 'The Whistle Stop Cafe,' and a cook named Sipsey,  Sheriff Grady, and the Reverend Scroggin.

Fast forward to 1986 in Fairhope, Alabama, where Dot the newsletter reporter writes: "You're Never Too Old to Learn:" I thought I had known this before, but I never realized just how much we all depend on other human beings, until I got hit by a truck in the Walmart parking lot...

People I'd never met before in my life, who didn't know me from Adam's cat, suddenly became the most important people in the world."

What I found most enjoyable about this story is that there is a lot of truth in what children learn from the community in which they were raised and just how important the people in the community are in good times and the unfortunate times that forces kids to grow up a little bit quicker. We really are put on this earth for a good reason and people need people in order to prosper and grow. I really do think that whether it's because you're a real estate agent or not, if you are living in a community, there are ways each person can contribute to future opportunities. And to think, members here on ActiveRain also influence one another by their stories they share here on AR.

I will end this post with one more quote (a real Southern quote) from the character Dot in "The Wonder Boy of Whistle Stop," in reference to the man who hit her in the parking lot, she writes, 'bless his heart.' And finally, I'll leave you with one final thought from me - a home is much more than bricks and mortar and material goods. Where there is love, there is home - Patricia Feager Hi Kat Palmiotti it was published in 2020 but I found it where the new books are sold at Barnes & Noble. I feel lucky I picked it up and read it. For me, it is the best book I read in years!

I hope you have a very special day! It's sunny and hot here. 😎

Patricia Feager, MBA, CRS, GRI,MRP - it was 100º here yesterday! Can you imagine?

I love Fannie Flagg so this book will be good!

It has been a while since I read one of her books.  I have njoyed each and everyone of them, and I will put this one on my list.  Wishing you a wonderful day.  Happy August. A

Kat Palmiotti - No I can't. If you have more sun today, soak up the sun and be sassy about it too!

faye schubert - Some authors become household names. Fannie Flagg is an incredible writer! I hope you read it soon and enjoy it as much as I did.

Happy reading and selling to you!

Ron and Alexandra Seigel - Happy August 1st to you too! My, time goes by fast...

I couldn't put the book down. I hope you are moved too!

It's fun to read, review and share books with our peeps, good on you and thanks for the recommendation!

Sounds like a fun read Patricia!  Down to earth, good sense thinking and good neighbors surely can make a huge difference in 'raising all' the kids!  That was true where I grew up!

Hello Thomas J. Nelson, REALTOR ® e-Pro CRS RCS-D Vets - Books are fun to read. They take us out of our element. I hope you get to read and relax more.

Have a wonderful day!

Anna Banana Kruchten CRS, CRB, Phoenix Broker - You'll feel right at home starting with Chapter I if you read "The Wonder Boy of Whistle Stop." As I was reading the book, I was imagining which actors I'd like to see if a movie is made. A feel good book that is 'down to earth" is always welcoming!

Patricia your final though is spot on.  A true home does not require a building.

George Souto - Thank you for your support and expertise on this subject.

Good morning, Patricia... thanks for this reading suggestion. Sound just like my kind of book!

I don't think I have even seen the movie Fried Green Tomatoes much less read the book, haha.  From the way you describe the book though, it sounds like one I would enjoy if I ever take up reading.

Nina Hollander, Broker - If you read it, I hope you'll find it enjoyable. I know I did!

Nina Hollander, Broker - It's easy on the brain reading with short chapters but entertaining. Nina, I'm so sorry you have to have hip replacement surgery. I hope you are under the best medical care and that it goes well.

Brian England - To each its own! If you do decide to read, I hope you will find good books to read.

Fried Green Tomatoes is a classic that gets right to the human condition and shows us compassion, true love and acceptance in a southern setting. Towanda!

Bless your heart can be a positive thing or not so much. 👀 I will read this book because you recommend it and I have a great love of the written word.

Wanda Kubat-Nerdin - Wanda Can! There are certain novels and movies that are truly unforgettable. Fried Green Tomatoes is definitely up there! I know what you mean about using the term, "Bless your heart." I learned quickly when I moved from the Midwest to the southwest in Texas. Please let me know what you think once you have a chance to read the book. Like the original, this new book has lovable characters too. Happy reading to you, my friend!

Thank you very much, Patricia, for your recommendation.