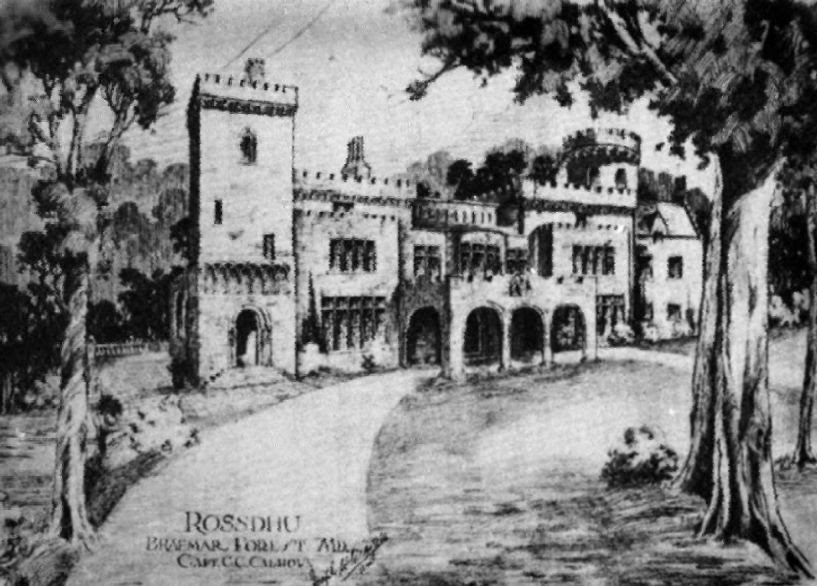 Check out our video about this Scottish castle in Maryland!

Recently we visited Rossdhugate, which was the gatehouse of what was once a stately manor in Chevy Chase called Rossdhu.

The property is listed by Washington Fine Properties and is up for sale at $1,875,000, It features 4 bedrooms, 3 baths and 2 half baths. The lower level features one bedroom and a billiards nook. The living room and kitchen are located on the second level. There is a balcony off the kitchen and a patio off the living room. Remnants of the hunting lodge decor can be seen in the updated kitchen.

The top floor features the rest of the bedrooms and a skyway to the alternate staircase. There is a laundry room at the bottom of the second staircase.

There is a courtyard with a bubbling fountain, and a fabulous patio overlooking a beautiful private pond dubbed Wee Loch Lomond.

The house was built in 1927 by Mrs. Daisy Calhoun. Daisy, born Margaret Rose Anthony Julia Josephine Catherine Cornelia Donovan O'Donovan was born on March 12, 1863 in Philadelphia. She moved with her mother to New Orleans when her father died and she took the last name of her stepfather, Breaux.

After attending boarding school inWashington, DC, Daisy married a banker named Andrew Simonds in 1885 and moved to South Carolina. She and her new husband were gifted a mansion by her father-in-law, but it didn't suit her so she had it torn down and built amansion they called Villa Margherita. Sometimes referred to as the White House of the South, three Presidents were supposed to have visited it. Daisy turned the house into a hotel in 1905 after her husband died.

In 1907 Daisy married Barker Gummere, another banker. She moved to New Jersey and lived with him in a place they called Rosedale. After Barker's death in 1914, Daisy turned the house into a school and her then-teenage daughter was its first student.

At some point she returned to Washington DC, where she met and married her third husband, Captain Clarence Crittedon Calhoun, a rich lawyer from Kentucky.

Captain and Mrs. Calhoun settled in Chevy Chase, MD and built Rossdhu, a stately mansion modeled after the 15th Century Scottish Castle by the same name near Loch Lomond. It is for this reason why the pond on the current property was called Wee Loch Lomond. The original Rossdhu was built by John Colquhoun, an ancestor of the dear Captain.

The Calhouns enjoyed Rossdhu only a couple of years because the stock market crash and the Great Depression that followed forced them to relocate to the gatehouse. To make ends meet, they rented out the mansion as a restaurant and nightclub. The property was then used as apartments in the 1930s. It was torn down in 1957, only 30 years after it was built.

Daisy was an advocate for women's rights. After attending a political convention in the early 1920, she founded the Women's National Foundation and later the Women's Universal Alliance. Included in the WNF's bylaws was the promise to educate "women in their civil rights and duties as citizens, by giving and receiving instruction in history, civics and statescraft and all other branches helpful to good citizenship . . ." (Source: Blog, The Irrepressable Daisy Breaux.)

In 1924 she announced that William Clark Noble, a prominent designer and sculptor was selected to create a monument- an "acropolis to the womanhood of all lands, as a tribute to the great women of the past and to the motherhood of the world." However in 1925, a campaign to raise $15 million for Joseph Geddes to design it was announced. Later, Henry Hake was selected to design the monument. This didn't sit well with Mr. Noble and he began making demands for large sums of money due to the fiasco. He was eventually sued in 1931 for extortion and the trial brought lots of attention to the world of the rich, specifically Daisy's. The mother's monument was never built.

According to her memoir, The Autobiography of a Chameleon, Daisy stated: "Many women are so constituted that they cannot bear to see one of their sisters, who has been on a par with them, suddenly elevated to a position of authority over them." She never wrote another memoir but wrote a cookbook of recipes from a "Famous Hostess."

Captain Calhoun died in 1938 and Daisy eventually moved back to South Carolina and lived there until she died in 1945 at the age of 85.

Hello Cathy- - -real estate offers many opportunities to experience and learn.  Amazingly enough, it happens on a regular basis.

Cathy, that would be very special, and thank you for sharing with us!