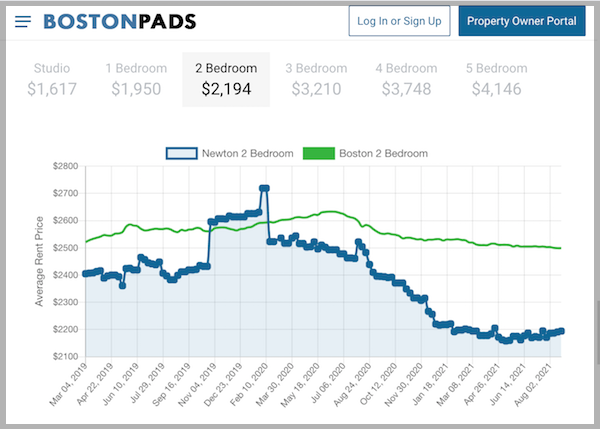 The current apartment vacancy rate in Newton is 1.64% at the moment.  That is the 4th highest vacancy rate out of the 14 suburbs closest to Boston behind Medford (1.73%), Belmont (1.80%) and Malden (2.25%).  It also eclipses the overall Greater Boston vacancy rate of 1.48%.  That marks a 24.24% increase in apartment vacancies compared to August 2020, making Newton one of the 5 suburbs where vacancies have actually increased YOY.

Newton has seen the sharpest decline in average rent compared to August 2020 (-7.63%) out of all suburbs in Metro Boston.   These price drops seem to have affected Boston’s most expensive areas overall, as Brookline and Cambridge also saw larger than average price declines (-5.06% and -4.21% respectively) compared to Greater Boston (-3.19%).

Zachary Parker this is valuable information to both Renters, and Landlords in your area.