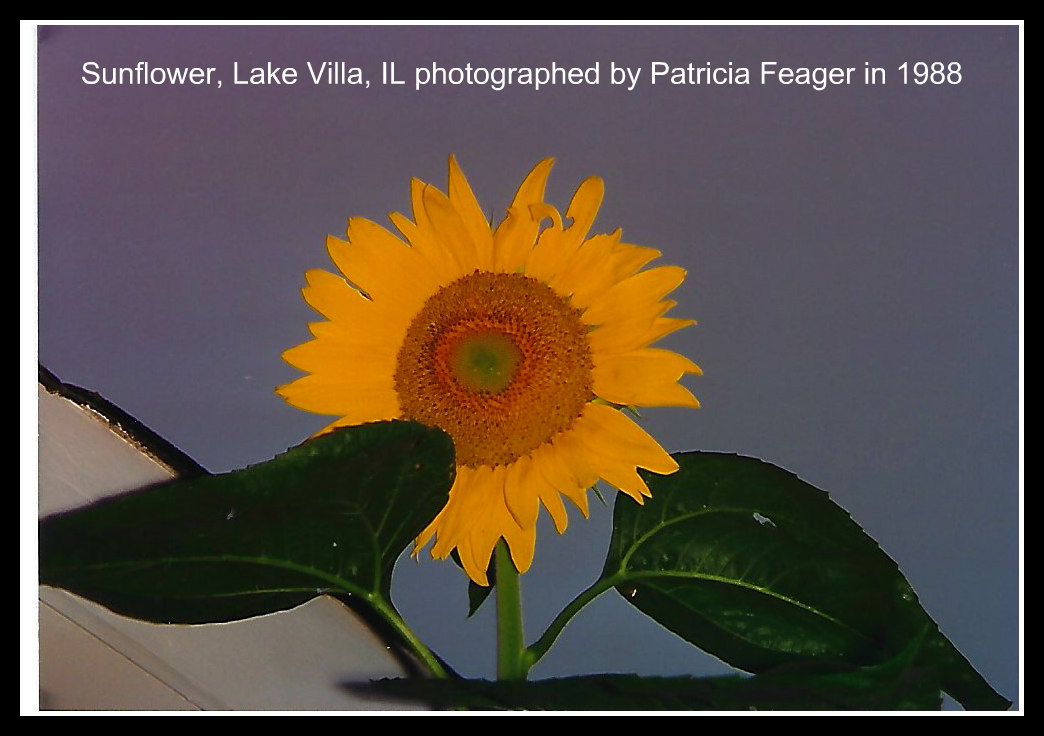 My obsession with flowers started with daisies and graduated to sunflowers. Like many children the fascination with growing tall was intriguing, so I began growing sunflowers. Photography was educational and fun for me and when I received my first camera at eight years old, I began taking photos of everything I grow. You can only imagine how many pictures I have of my children!

Growing up in Illinois, I was educated on everything I could learn about its history. It wasn't until the late 1980s that I began taking classes with Historian Dallas Krumm who taught social sciences at high school and college level and learned that he enjoyed participating in Native American and historical reenactments. By this time, I was forever hooked on wildflowers and sunflowers grown by seeds. In this photograph the sunflower continued to grow even taller!

Today, I still enjoy everything in nature that grows and taking photographs. Right now, my project is going through old photographs and class materials about things I learned over the years and want to keep.

I feel fortunate that I was lucky enough to learn from teachers who had firsthand knowledge and immersed themselves focusing on what they believed students should learn. Dallas Krum was a true living historian who researched and hunted artifacts, visited and worked at several archaeological excavations in the U.S., Canada and Mexico. He taught classes at the College of Lake County in Grayslake, IL for 20 years, focusing on Indians and artifacts of the Midwest.

Sunflowers were found in the eastern part of the continent originating in the region between the Mississippi River and the Appalachian Mountains, an area that includes the rich watersheds of rivers in Illinois, Kentucky and Tennessee. Sunflower seeds date back to 9000 BP. Their seeds contain oil and are used for food by humans and birds and has been made into other products such as soap and paints. Only young flowers move to face the sun throughout the day. Once they reach maturity, they stop sun-tracking and their blooms forever turn eastward.

Today, sunflowers grow in all 50 states and thrive very well in environments where they can receive six or more hours of direct sunlight. They can survive in extreme heat, but grow very well between 70 to 78 degrees. In addition, as long as their roots get water, they can tolerate periods of drought. If you're out and about at dawn, you'll noticed sunflowers will start off the day facing east, getting ready for the sun to emerge over the horizon.

Dallas Krum passed away on April 1, 2014 at 66 years old. His legacy will never be forgotten. I'm a firm believer that when someone well educated teaches, it truly is a gift to the world! ---Patricia Feager

Patricia I love sunflowers and have since I was a kid.  I grew some way back in 6th grade and actually won a county fair blue ribbon for them.  Which honestly I didn't think I deserved as most of the time I was out at the lake house that summer and didn't pay much attention to them.  They were good at growing and thriving all on their own!

Nice way to introduce the history of the sunflower Patricia. They too are one of my favorite flowers!

Nice post Patricia.  Facing east and following the sun.  I was not aware and will take note next time I am around some sun flowers.  Tempted to maybe plant some next year to witness first hand.  Enjoy your Holiday weekend.  Be safe, stay healthy.  M

Hello Patricia - when seeing sunflowers, it can be easy to see their relationship to humans and humanness.

Ron and Alexandra Seigel - When the sunflower grows tall, it's easy to take notice. Looking up to sunflowers rather than down on the ground is pretty remarkable! The taller they are, the more powerful they become.

Anna Banana Kruchten CRS, CRB, Phoenix Broker - Not many kids could say they won a blue ribbon at a county fair! I'll bet you got your picture in the local newspaper too! Congratulations! As for sunflowers, there are many lessons to be learned, such as growing up independently. They are made of strong stalks and seem to see the world from a point of view, few can! Aren't they simply wonderful!

Mark Don McInnes, Sandpoint - I think you will enjoy planting sunflower seeds and watching them grow. As mentioned by Anna Banana Kruchten CRS, CRB, Phoenix Broker sunflowers don't require a lot of attention but when they reach full maturity they always give a WOW factor that can't be beat! May you enjoy this weekend in its entirety from beginning to end. Enjoy the transition of time changes and seasons that are coming up fast! Be observant, safe, and healthy.

Michael Jacobs - sunflowers are similar in human kindness, growth, and opportunity. They give so much more back to the community. We can easily see the relationship between the two.

I love sunflowers, Patricia and you will often see a vase with sunflowers on my kitchen island. My mother's best friend adored them and until she died in her 90's one of my joys in life was to find her birthday and Christmas gifts with a sunflower theme. I still think of her everytime I see sunflowers and of course then of my mother. I miss them both even though they've both been gone for many, many years now.

I always enjoy how spectacular your photography is and I have always enjoyed seeing sunflowers in full bloom.

Nina Hollander, Broker - my heart is filled with compassion. You never really leave a place you love and you always know when you are loved. Your comment touched my heart.

Brian England - you're a true gentleman. I like your honesty and how you make me feel. I'm sure others feel the same about you. Always and forever I wish you the best life has to offer.

We've had many flowers in our gardens, but sunflowers haven't been one of them.  May have to make a try at them in a couple of years when we're settled in to our new place.

I've only grown one Sunflower in my entire life.  It was last year.  The thing reached 11' 4" and then had the audacity to face my neighbor's yard instead of mine.🙂

Liz and Bill Spear - Putting ideas in place for your future home must be exciting and fun! And will you continue to do your work with bees? In the photo I chose, you'll see that the sunflower grew pretty tall and didn't quit until it fully past the roof line. By that time, the flower was enormous! I'll never forget how thick the stalk was by the time I had to cut it down.

That's our plan, to hire someone to put our existing hives on a trailer and haul them to our new place.  We're looking at the topography and house site to determine the best place to put them (and a protective fence to keep the bears out).

Liz and Bill Spear - That's a wonderful master plan and smart growth too for yourselves, your property/investment, and the environment! Your kingdom is going to be very special because the two of you are an extraordinary couple!

Myrl Jeffcoat - what a bummer! You waited so long for that sunfower to grow that tall and it turned its face to the neighbor's yard. What an insult. LOL

Patricia thank you for all the information on sunflowers, I did not know most of it.

I love sunflowers and I love when it sounds like poetry about sunflowers about to happen. Love and light

for a few years I tried starting sunflowers in the early spring - one year my seeds froze, another year they flooded - one year I got it right and I grew massive sunflowers - I love that they turn to follow the sun - maybe there is an analogy there for us as Realtors - that we must constantly pivot to follow our suns