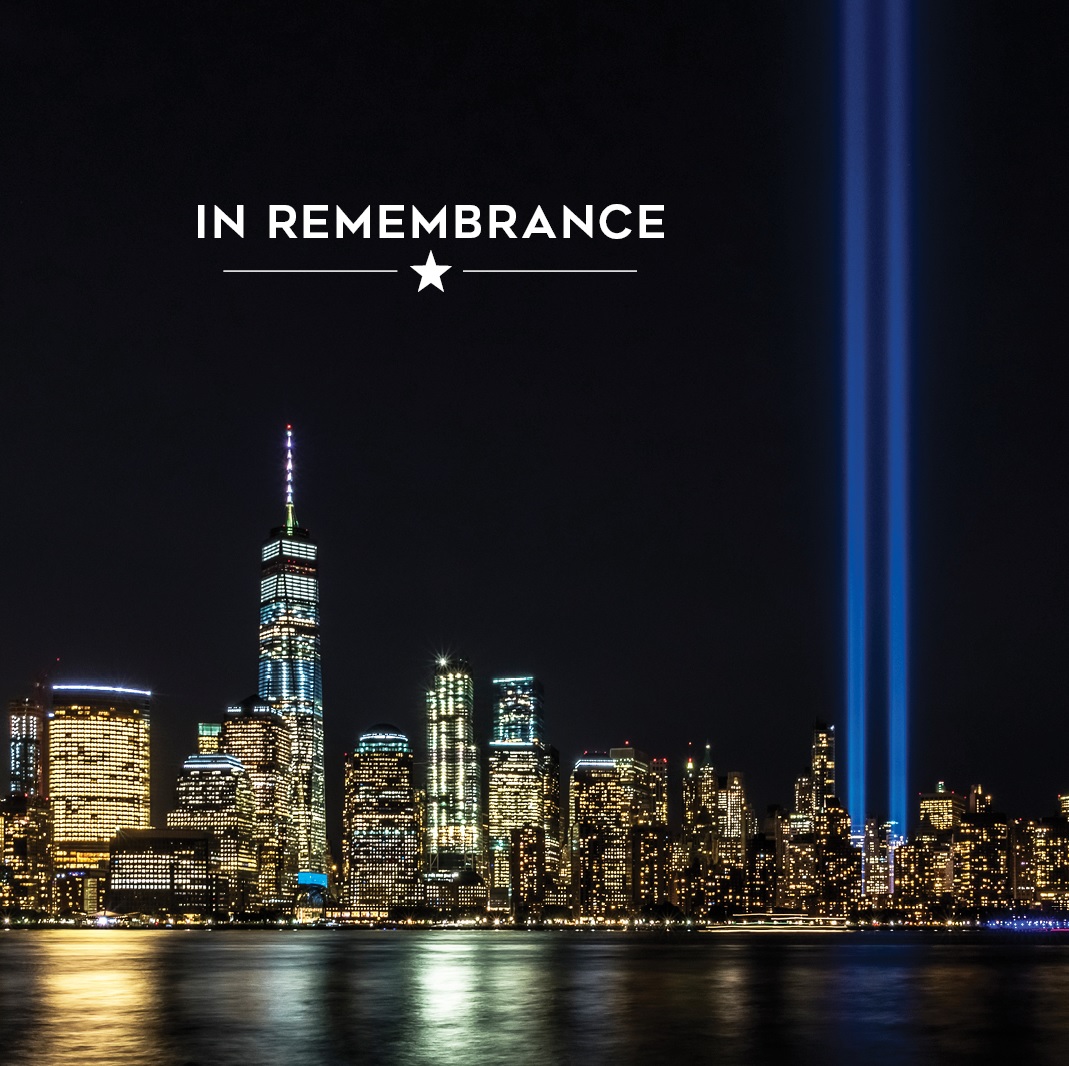 Today we mark the 20th anniversary of the devastating events of September 11, 2001. Certain events in life are cataclysmic and become forever embedded in our hearts and souls. No doubt the attack on our nation on September 11, 2001 is such an event. Those of us who were old enough to understand the events of that day will never forget that day. Probably, most of us remember exactly where we were and what we were doing when we heard the terrible news. I know that I do. The events and horror of that awful day are as crystal clear in my mind's eye as the day that happened. It feels like yesterday... and yet I know it's been 20 years... 20 years that seem to have passed in the blink of an eye.

With 20 years passing, increasing numbers of American have no personal memory of that day or of the solidarity that day created and the immense bravery that was shown that day. This is why we can never forget and why it's incumbent upon us to ensure that those who have no memory of that day remember it as well.

"If we learn nothing else from this tragedy, we learn that life is short and there is no time for hate.”

America’s poet laureate on September 11th, Billy Collins, wrote a poem  called ‘The Names’ in honor of those who perished that day. The poem's closing lines capture the memories of that day perfectly:

Names etched on
the head of a pin.

One name spanning
a bridge, another
undergoing a tunnel.

A blue name needled
into the skin.

The bright-eyed
daughter, the quick son.

Alphabet of names in
a green field.

Names in the small tracks of birds.

Names lifted from a hat

Or balanced on
the tip of the tongue.

Names wheeled
into the dim warehouse
of memory.

So many names, there
is barely room on
the walls of the heart.”

Michael Jacobs hi Michael... I also had forgotten about that poem and when I came across it again I knew it was just perfect for this post.

Lawrence "Larry" & Sheila Agranoff. Cell: 631-805-4400 hi Sheila... people who don't know and don't understand history are truly doomed to repeat bad events. So important to make sure the younger generations understand the meaning of this.

Good Morning Nina, I still remember that dark morning and could not believe when the first jet hit the first tower but to see the second one kept me glue to the TV!

Will Hamm hi Will... I suspect most of us were glued to the TV that day. I was also glued to my phone trying to reach friends and relatives in NYC, especially those who worked in the WTC area.

Hi Nina - since I was in New York I know victims and spent the day contacting our employees to see if they were ok.  There was a real coming together after that day.

Grant Schneider hi Grant... althought I knew people who worked in and around the WTC, no one I knew actually perished in the buildings' collapse. But it was certainly a frightening day until I knew people were okay.

Hi Nina- I couldn't agree more with what you said. (and yes, you and I shared the same quote!!)  We weren't hyphenated nor were we afraid to talk about subjects lest we offend someone.

Nina the memories of that day are forever etched in my mind, and I hope our country never experiences anything like that again.

I hope you are having a very special weekend.

Hi Nina Hollander, Broker - Today, my husband took our grandson outside to place our American flags.  He spent time explaining, in words a 6-year old could understand, what this day means and why it has impacted us so much.

Never knew there was a poem about the event.  So sad, in such a short time a lot of people have forgotten or just don't care anymore.

George Souto good morning, George... that day is also etched in my mind and will be till the day I die. I'm afraid I'm not totally sanguine that we won't experience more terror attacks like this in the future.

Roy Kelley thank you, Roy. As seems to be the case with all my weekends these days, I'm inundated with work and contract negotiations.

Sheri Sperry - MCNE® good morning, Sheri... kudos to your husband for doing that... more parents and grandparents should be doing just that so future generations understand what was lost that day and are motivated to make sure it doesn't happen again.

James Dray good morning, James... of course, I just don't understand how anyone could forget or not care about that awful day. More troubling to me is the growing number of people who don't know about it.

Nina, I knew it was very personal, you were THERE.   So many from NYC knew the people that lost their lives.   We had a pilot on the PA plane that passed, but I did not know him.

Joan Cox hi Joan... I wasn't in NYC in 2001, we had already moved to Charlotte three years prior. But I had friends who worked in the WTC and next to it so it was a very scary day until I could get hold of them.

So many things we took for granted were stolen from us n that day.  It changed the way we live and innocence was taken as well.

Ed Silva hi Ed... you are so right... I don't think we got the full measure of what was stolen until years later.