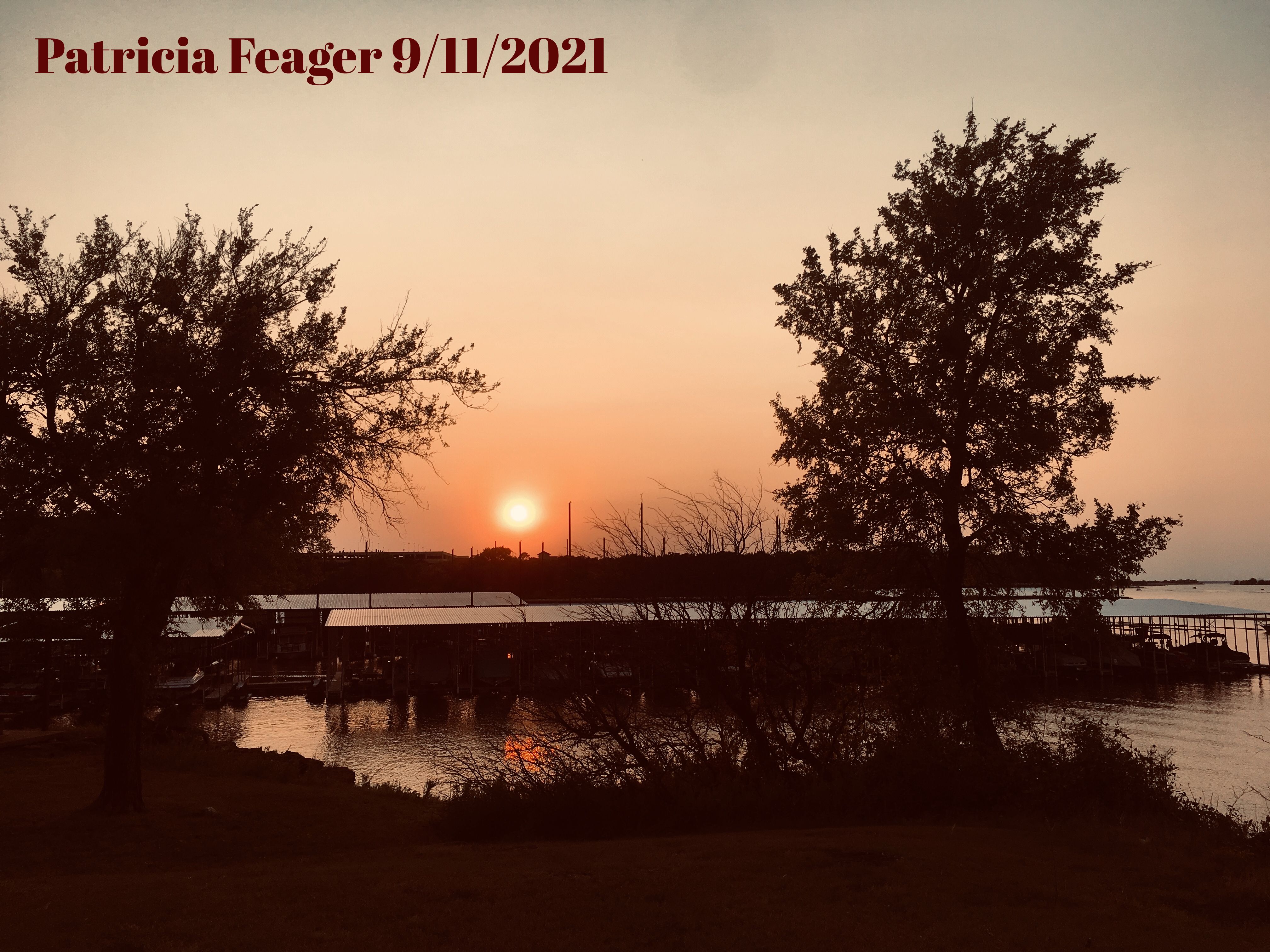 As the sun seemed to take a final dip into the lake at the Silverlake Marina on Lake Grapevine in Texas this evening, I relived the highlights of what this day has meant.

It has been quite a journey for those of us who can relive the tragic events of September 11, 2001. Everything changed in a New York minute. Transportation came to a halt in New York City and airplanes were not flying. It was an eerie time. For me personally, living so close to DFW Airport the silence was deafening. For many people trying to get in touch with loved ones in NY, PA, or DC phone services were interrupted. By nightfall, and many months later, it seemed as if the world stopped and people were caught up in a nightmare.

Despite how we were impacted by the violence, what kept us together was our courage. Challenges were many. The American Flag became the catalyst for positive change, compassion, and determination to become stronger than ever. Many were prepared and ready to fight. People were not afraid to pray or say, I love you. Life as we had known was stripped down, and in many ways, we became the best version of ourselves.

On the night of September 11, 2001, I was a student at the University of Dallas. The first words out of my professor's mouth were, you can throw away your Leadership Books, because everything that has been written about Leadership no long exists. We are in unchartered territories and we can no longer rely on our government for leadership. From this day forward, everyone has to think critically, become self-sufficient, keep your eyes and ears open, take responsibility, don't believe anything you read on the Internet, and never forget what 9/11 means.

Sadly, I think he was absolutely right but still, we pulled ourselves up by our bootstraps and moved on. Students graduated. Babies were born. People got married. Many went off to war. We buried the dead. Enjoyed sunrise and sunset. People traveled for business and pleasure. People lost jobs. Many homes went into foreclosures. New jobs were created. Many people relocated and life moved on. Seniors are still affectionately known as Baby Boomers and babies born after the pandemic are now referred to COVID Babies. Gradually, we all transformed. Now it's time to do what the Professor said, keep your eyes and ears open for change and have courage. We may suffer but we shall never succumb---Patricia Feager

Patricia Feager, MBA, CRS, GRI,MRP - That is a gorgeous photo, and I love the story of how you made it to the marina in time to take the shot! That's fantastic.

As for the world and September 11th.. that day changed the way our country felt. Everyone worked together. Flags flew everywhere. The tragedy birthed a tighter sense of community in many ways. Unfortunately, we seem to have lost a bit of that in the years since.

I hope your Sunday is fantastic.

That is a truly amazing sunset that you captured, I always enjoy your photography!

Kat Palmiotti - Thanks! I was pleased that I got off the bridge safely and the third narrow road, less traveled, gave me an opportunity to capture the sun and reflect. The sun can set mighty quick!

Since the beginning and over the years, I often wondered about the people of NY. As an observer outside the State of NY, it was the courage of the people, the firefighters, first responders, and ordinary people that gave me hope. I never felt former Mayor Giuliani was pulling my leg. He seemed sincere. I always thought he personally had a responsibility to be somewhat of a caregiver to our Nation by being truthful as he continued to keep a pulse on ground zero. To me, he emerged as a stronger leader than our President. New Yorkers may or may not agree, but from a distance, that's how I saw things.

Once the decisions were made (which seemed to take forever) about the Memorial to replace of the towers with blue lights streaming up towards the Heavens, things got somewhat back to normal (at least that's true for me). I thought it was a good choice because out of the ashes and all the tragedy, the lights illuminated the lives of the living and the dead profoundly. Miraculously, as a Nation our souls were strengthened. To the family members who lost their loved ones, they are the ones who had to deal with the crushing blows as the pages of history were written.

Brian England - you always make me feel good. As a person who learned to deal with an interrupted life long ago getting a compliment or constructive feedback means more to me than most people realize. Thank you.

Good morning, Patricia... loved your photo and loved your reflections on the tragic events of 9-11. Our lives changed forever on that day and a great measure of innocence was lost.

Nina Hollander, Broker - Twenty years goes by quicker than we think. Our lives have a woven design of complex threads being pulled in many directions. There will always be knots and threads that break. A beautiful sunset gives me reason to pause; however, when it's on a special occasion, like the anniversary of 9/11, I realize we go through many layers and we have many decisions to make over time. But time can't be put off. I feel blessed to have found that spot and to see that dip of red ball of fire which certainly ignited my passion to think, compose my thoughts, and write this morning after a good night sleep. Things really do look different after deep reflection. I'm glad you loved the photo too!

What a glorious photo you shared with us, as well as the story behind it. Critical thinking is something that should be thaught early in life.

Patricia, Your sunset is a very dramatic way of reflecting how sad a day 9/11 is to all Americans...

Ron and Alexandra Seigel - Even though I always knew we lived in a free country, I never ever thought, for one second, I was deserving of a free lunch, free education, a moratorium on rent to get out of paying rent to the Landlord, and so forth. My parents and educators taught critical thinking and discipline. The freedom I've enjoyed gave me the greatest comfort and joy; perhaps, things were much different after WW11 and being a baby boomer was a lucky gift.

Have a great day and an outsanding week.

Roy Kelley - Same to you! May good things happen this week for you and Dolores.

Patricia the biggest battle we seem to have these days is the battle from within.  Those who want to destroy what makes us great are here among us.  It is up to those who believe in the values and freedom many have fought for, to make sure the false prophets from within do not succeed.

George Souto - I am completely at a loss what is happening to our schools. Every single time I hear what's happening across America in our schools a deep sadness washes over me. Our children are taught to go to school and listen to their teachers. I'm sure there are still good teachers and good schools but the reports about sexuality are disturbing and unwarranted. That's not what freedom is about. Without values, destiny is shot to hell.

Last evening I watched the 60 Minutes programming about 9/11 on CBS.  Much of it was through the perspective of the New York firemen.  There was video that I hadn't seen before.  In many ways it seems like that event happened yesterday, and in others it seems a lifetime ago.

CONGRATULATIONS Patricia, on having this blog FEATURED in the PHOTOS group!

Myrl Jeffcoat - I agree. In the big scheme of things, 20 years is not long. Those videos help us to never forget. I also became aware of things I didn't know and to be honest I don't know if I saw it before or blocked it out or turned the T.V. off, but as I age things do look different and yet still the same. Could it be, we all suffered from PTSD? The feelings of sadness come back but the scenes are different, perhaps more intense, scary, and surreal. Oh yes, I remember, but then I feel a heavy heart. I can't even imagine what life was like in NY City for the people and the families who were living there when it all occurred. I suppose these recurrent feelings and memories will live on. The only difference is, New Yorker's heard the sounds, they smelled the stench, and consumed the ashes. We were not there, but vicariously we lived through it and felt it with our hearts and soul.

Myrl Jeffcoat - Thank you for the FEATURE in the Photos Group. Reflection gives us hope.

Laura Cerrano - The 17 year old man I spoke to is aware because his family shares what happened. Plus, as these young children grew up many had fathers, grandfathers, uncles, and family members and friends of the family who went to war to fight for freedom and to help wherever they were needed. For their entire lives, they recognized military apparel.