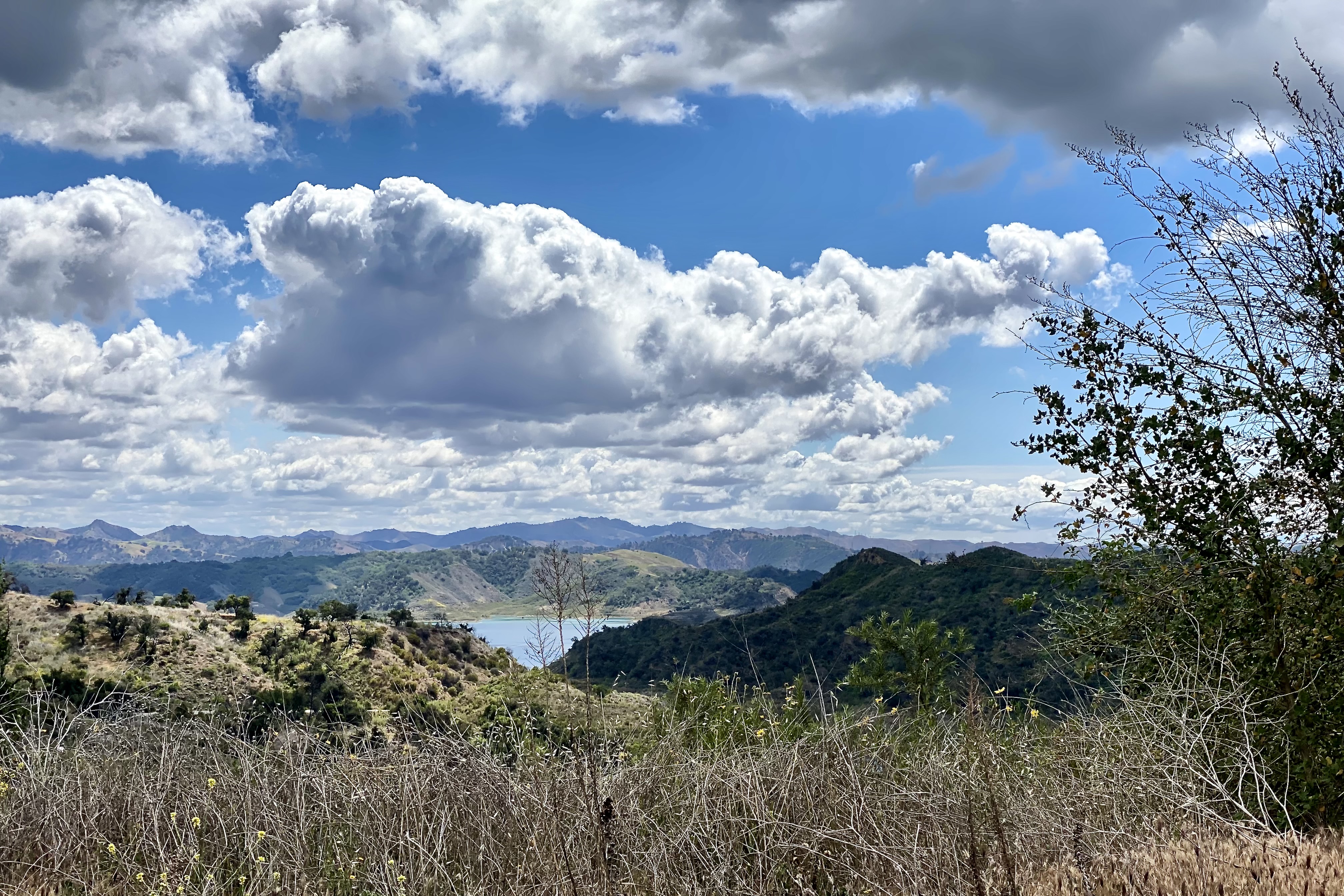 Although our little town of Carpinteria is situated in Santa Barbara County, part of it borders in Ventura County!  Pictured above is Lake Casitas.  Our water comes from Lake Casitas.

"Lake Casitas is a reservoir in Ventura County, California, built by the United States Bureau of Reclamation and completed in 1959. The project provides drinking water and water for irrigation. A secondary benefit is flood control. Casitas Dam was constructed on Coyote Creek, two miles before it joins the Ventura River".Wikipedia

As you drive winding roads (25mph)bordered one one side by the lake and watershed, the other side of the Los Padres Natural forest, you eventually come to the picturesque town of Ojai.  Once in a while we head there, for great Mexican food, and the feeling of getting away.

Thanks for telling us about your local area.

I have never been to Ojai. I love the small towns that dot (mostly further north) the California experience.

Hello A and Ron,  always good to see your daily blogs here in the rain and learn about your area.  Thanks

Hi Ron and Alexandra- what strikes me about CA is that you have access to so many different terrains all within driving distance.

Michael Jacobs we are due for a vacation at least one night's stay somewhere, and we keep taking little jaunts instead.  A

Myrl Jeffcoat It is all part of the National Forest, (Los Padres).  So it is fairly untouched. A

Wayne Martin definitely convenient.  Thos 18 mile take over a half hour to get into town, so many 25 mph areas and rightly so. A

Myrl Jeffcoat thank you for the feature...we appreciate it. A

Nina Hollander, Broker we do live in one of the best areas, I wish our political scene was not so obtuse.  A

Kat Palmiotti we have not that ride yet.  It means going down to the boat dock.  We just may do it one of these days.  The 1984 Olympics used it for sculling events. A

Brian England Ojai is a very affluent community.  They run to the beat of a different drum.  There is a big art scene, some wineries and lots of citrus and avocado ranch.  They have one of the lowest city tax bases.  The City of Ojai has 7000 people and the total with the outlying area is 30,000.  There are lots of hippie influences there and it feels retro even though the faces are young... We like it in the fall and winter when it is not as hot.  You need AC in the summer there.  A

Bill Salvatore - YVP Blog it is a fun place to viist, and they have wonderful tacos!  A

Grant Schneider we are all hoping for a rainy autumn and winter.  Keeping the reservoirs full is important.  We have had an extremely mild summer, and it is quite cool today high of 64.  A

Wendy Rulnick I can see how you thought that.  The road is so much higher than the lake.  The best caldera is in Oregon, Crater Lake.  There is the enormous caldera in Africa which is on our list, the Norongo Crater. It make the Oregon one look like a cup of water. A

Roy Kelley You can tell we love where we live...Wishing you a wonderful evening.  A

Jeffrey DiMuria 321.223.6253 Waves Realty if you have been to Calistoga, it is similar in culture to some degree, although Calistoga recently has gone through a gentrification.  Ojai is nestled in the mountains and removed from the other cities in Ventura. It is rich and independent from the rest of Ventura, it runs to the beat of its own drum.  A

Will Hamm happy to hear you enjoy reading our posts. A

Kathy Streib that is the beauty of it.  We had a visitor from back East  when we lived in Los Angeles.  We took her skiing in the morning, and then sailing in the afternoon of the same day.  She never forgot that. LOL A

Hi Ron and Alexandra Seigel - We used to do a lot of boating when we lived in CA. Of course, there is no water recreation there. But any time the words, "lake" or "river" were mentioned,  my husband would check it out!

Sheri Sperry - MCNE® Lake Casitas was the choice for sculling during the 1984 Olympics.  It is part of the Ventura River watershed.  A