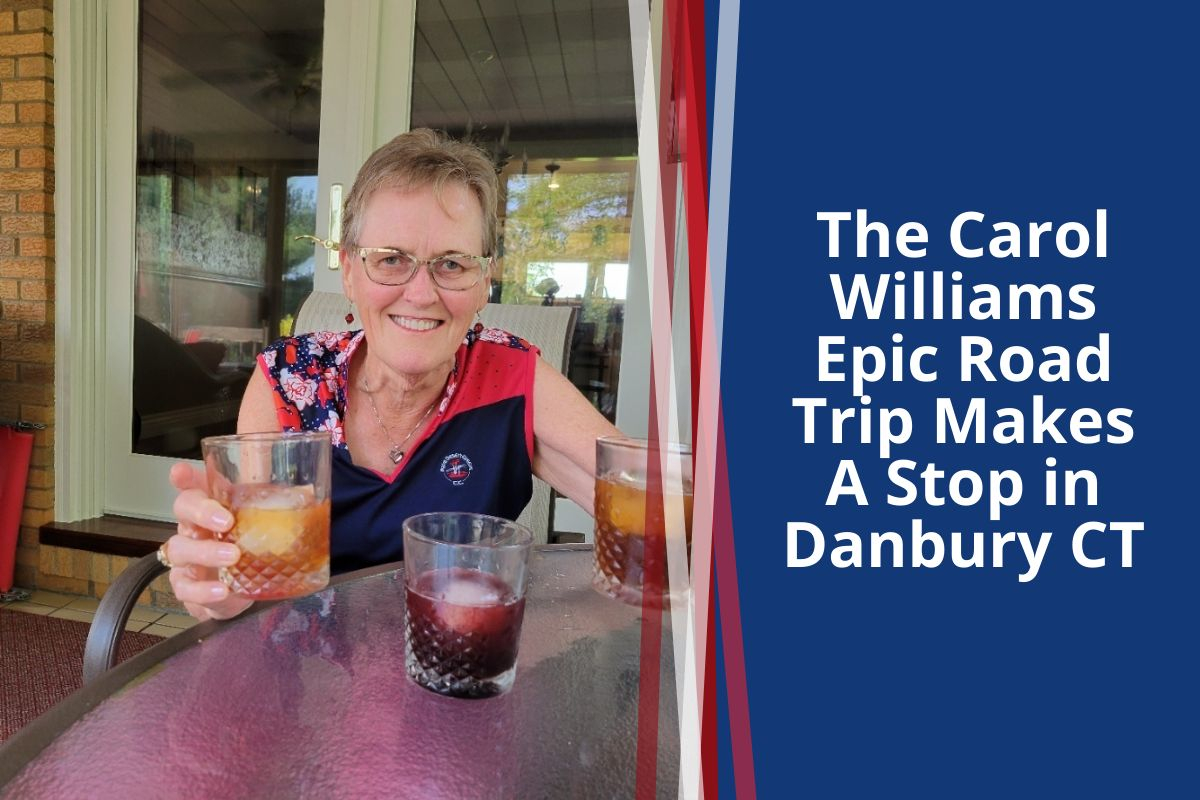 For those that have been following the adventure, Carol Williams is making a tour of the country that will ultimately take her 2 months to complete.  It was started out for her to play golf with the friends she has made on her Facebook group, Women Who Golf.

As I saw her itinerary, I reached out to her to see if we could connect when she was in Lenox, MA as it wasn't that bad of a drive for me to get there.  She instead changed her route to come down to Connecticut as it as on the way to her next stop in Philadelphia.

I suggested she stay in Danbury as it is a small detour and would be easier for her to continue her drive south.

Well, I also reached out to a few Rainers here in the CT area and it was agreed that we would all gather and have an event, once known as a Meet-up.

The location was a Middle Eastern Restaurant called Kibberia, just down the road from the hotel where she was staying. So this impromptu gathering was attended by Grant Schneider and his wife Phyllis (seated), George Souto, Dagny Eason, Carol and myself.

As the restaurant does mostly takeout, we almost had the place to ourselves. There was a lot of laughter, conversations about days past, a recount by Carol of where she has been and where she expects to go, and as happens when Active Rainers meet not an uncomfortable moment as all are connected like a family.

We know we will see each again on the Zoom calls, and as will be the case, we will also share the journey as Carol writes about her stops.  It's as though we are making the drive with her.

Andrea Bedard   It was an in person Zoom meeting.

Ed Silva I'll look forward to that, Ed. I expect Carol to arrive on my doorstep next Friday as she'll be staying with us.

Roy Kelley   We had a great time, and thanks for stopping.

Patricia Feager, MBA, CRS, GRI,MRP   As all are in real estate a chance for a lunch during the day was too hard to resist

Ed Silva - Nice shout out for the Middle Eastern Restaurant Kibberia! It must have been an exceptional meet-up and I'm sure that the owners and staff were honored to serve your table and hear the laughter, good conversations, and to see smiles adorn their restaurant once more.

Sheri Sperry - MCNE®  Up here in CT no drive is too far for a Meet-up.  We even had Bob Crane attend a Meet-up at Dagny Eason  house and he lives in Wisconsin.

Anna Banana Kruchten CRS, CRB, Phoenix Broker   She is racking up the miles for sure.  It's like that old movie of Bill and Ted's big adventure

Patricia Feager, MBA, CRS, GRI,MRP   I know they appreciated the business even though the party was an unusual one for them

How fortunate for the six of you to be able to meet-up, Ed!  I'm certain it was an enjoyable experience.

Wow, what a wonderful group of people to dine with Ed! Carol is surely making the rounds and making lasting memories through her travels.

Hi Ed - we had a great time.  Thanks for arranging it.  When you get a chance could you email the photo.  Thanks.

Ed it was great getting together with everyone there, and I am looking forward to the MeetUp Dagny is going to put together.

Myrl Jeffcoat   This gathering was just like all the previous Meet-ups I have attended,  Nothing uncomfortable and all talk as though long time friends.

And thank you for the recognition

Wanda Kubat-Nerdin - Wanda Can!   I do believe she is enjoying the trip and the memories will certainly linger.

Grant Schneider   Thanks for stopping by and for sure it was fun.  Photo sent

What a  fun day!  I used to love the MeetUps we had in our area.  It was a great idea for you to put one together to celebrate and enjoy Carol's Epic Road Trip.

Sounds like lots of fun with the Connecticut Rainers, nice to see Carol making it to the East coast.

Ed- I loved how you assisted Carol Williams with where to stay that would be convenient for her road trip!!! And I recognize all in the photo!!!!!  Love this MeetUp!!!!!

What an amazing group of people and I am sure you had a good time together.  I hope to meet everyone in that picture someday!

I was late to the party of Carol's epic road trip, but what a great adventure this must be. And, making a stop in your area and having a meet-up must have been a bonus!

Thanks for sharing your meetup.

Only a few more days until Carol Williams will be in Baltimore. Ed Silva and I love that we have in-person zooms.

How wonderful! If I was still on the east coast, I would have definitely made it to that meetup!

We'll get together one of these day, Kat. We're not that far from each other.