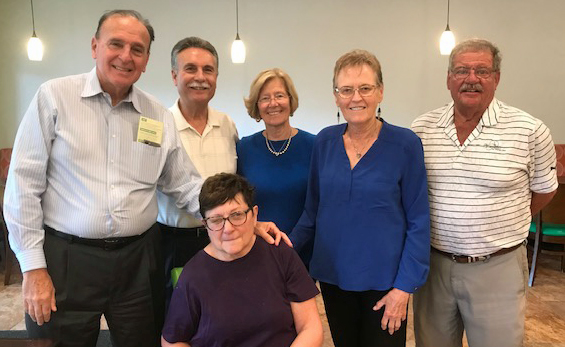 This past Thursday, thanks to my good friend  Ed Silva, I had the pleasure to MeetUp with the one and only Carol Williams .  I doubt there is any ActiveRain member, who is regularly on ActiveRaian, that does not know Carol.  Carol is also one of the regular Weekly ActiveRain ZOOM Meeting attendees, and contributor.

When Carol made it know she was going to be within a short distance of CT while on her cross country road trip, Ed reached out to her about meeting up with her.  Carol not only agreed, but she even changed her plans, and drove to CT.  Ed than reached out to a few of us who regularly attended the past MeetUps in CT, many of which were hosted by Dagny Eason.

In attendance was Grant Schneider and his wife Phyllis (seated), myself, Dagny Eason, Carol Williams, and Ed Silva.   The food was excellent, but the company and conversation was even better.  It was as if all of us were use to meeting in person on a regular basis.

Before Carol headed out to MeetUp with Hannah Williams in Philadelphia, and us wishing her a safe trip, there were lots of laughs and hugs which make these MeetUps even more special.  This MeetUp with Carol, also started a conversation about having another old time MeetUp at Dagny's house later this year.  I am hoping Dagny can pull it off, it would be great of see everyone again.

George Souto, So happy that you all could get together. Looking forward to seeing Carol Williams on Tuesday for our meetup lunch.  Thanks so much for sharing.

Hi George Souto - It is such a delight to see the group get -together with Carol. Happy Saturday!

Hi George- I love seeing the photos from Carol Williams road trip!!! I also remember the legendary MeetUps that Dagny Eason used to have!  Maybe she'll organize another one!!!

I'm glad you had the opportunity to meet-up with Carol, George.  I've been enjoying her posts as she travels along on her road trip.

George, it all came together perfectly with the added surprise of Dagny.   The Meet-ups were such fun which made this an easy gathering to plan

Hi George - it was good to see all of you again and see Carol in person for the first time.

Hi George... delighted that you enjoyed the meet-up with Carol. Meet-ups like this are always the stuff of good memories. I'm looking forward to seeing Carol here in Charlotte on Friday.

Such a great-looking group!  I am glad that you got the chance to meet Carol Williams she is such a wonderful woman!

I.loved seeing everyone live.and in person! Thanks to all for making the effort to get there.

So cool George Souto and I am glad to see Dagny out and about well!

What an exciting time for all of you to get together with Carol. I was late to the party and just started reading about her golf journey, and look forward to reading about more meet-ups again.

Hello George and Carol Williams is so great to meet in person andwish I could got a round of golf in,

I think it is so cool that you are traveling the country and meeting people that you have only known online (including me).  I will be taking your lead and looking up people on my future travels.

What a fun time that must have been!! You are so lucky! AR meet-ups are the best!

George Souto - What a treat! It sounds like everyone had a really good time! I'm glad you all got together. Cheers to you and all your family and friends.