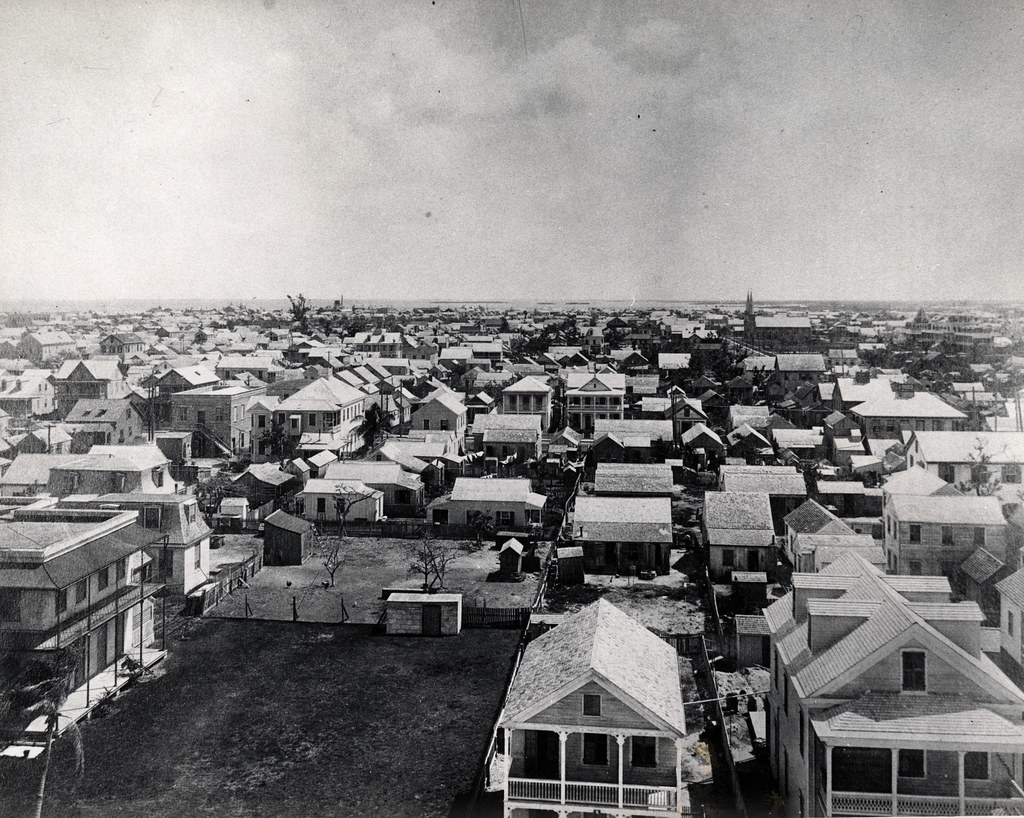 The above photo was taken from the Key West lighthouse in 1910 - just fourteen years after the Great Fire of 1886 which destroyed most of the commercial buildings and many homes in Old Town. You can see the spires of St. Mary's Cathedral near the upper right and Ernest Hemingway's House in the lower left.Most of the homes in Old Town were built by 1899. Use your wildest imagination and contemplate how so many homes could have been built on an island with few natural occurring building resources and serviced only by boats in a time before power tools, delivery trucks, air conditioning, and porta potties were available. 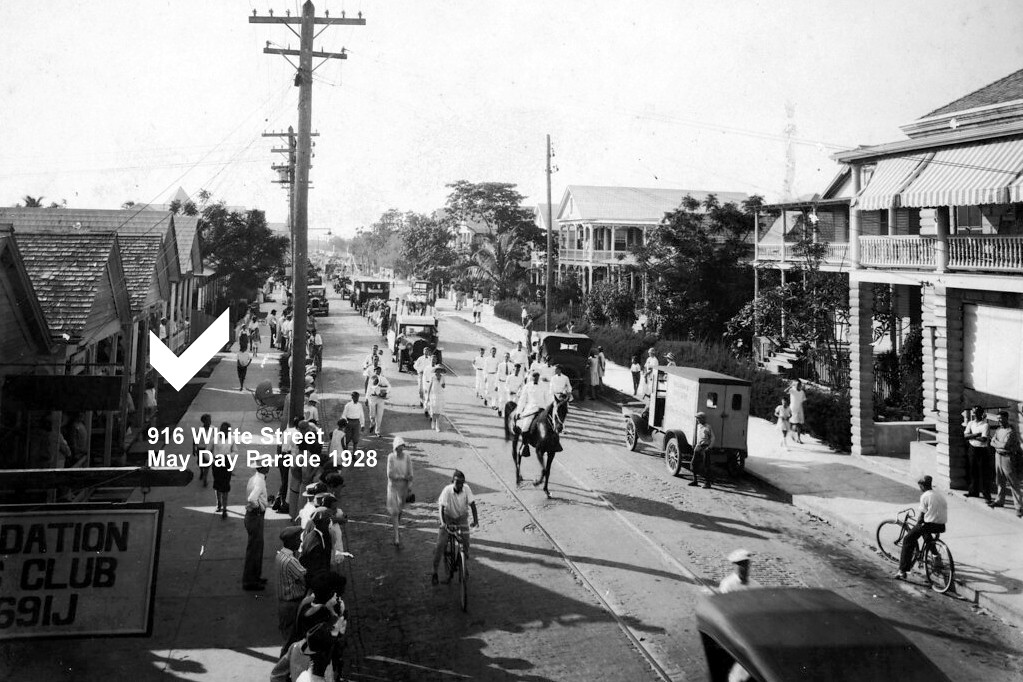 The above photo was taken from the corner of Truman Avenue looking north on White Street in 1928. I added the arrow on the left side to indicate 916 White Street which was one of several cigar maker cottages that made up the Pohalski Village.

In 1886 an entire village for cigar makers was developed in one corner of Old Town Key West. The Pohalski and Co. cigar factory was located at the corner of White and Truman. Cottages lined the nearby streets and lanes as was typical of the other parts of town where other cigar factories were located. The cigar maker cottages were simple in design and construction and provided basic shelter to factory workers. In his book The Streets of Key West, J. Willis Burke writes about Pohalski Village: "On the other side, off the western [should be eastern] side of the cemetery are Havana Street and Pohalski Avenue, byways that echo the area's once thriving cigar-making industry.... In the late 1880s, cigar magnate Pincus Pohalski, a transplant from Texas built a factory and then established an entire village within this block."  Smaller lanes in the village include Gerome Avenue which is a City of Key West walking lane about eight feet wide and nearby Nichols Avenue which is only about ten feet wide and runs perpendicular to Pohalski Lane  the rear through street west of White Street. Division Street at the south is now known as Truman Avenue. At the end of the 19th Century and the beginning of the 20th the people who lived in these homes probably did not have horses let alone cars.  The houses were jumbled together on small lots accessed via small lanes called Avenues. Many other cigar manufacturers built similar cottages for workers across Old Town and even into what is now Mid town.

I have been photographing the renovation of 916 White Street for well over one year. The builders have rebuilt the place from bottom to top, side to side, front to back. They are not done yet. 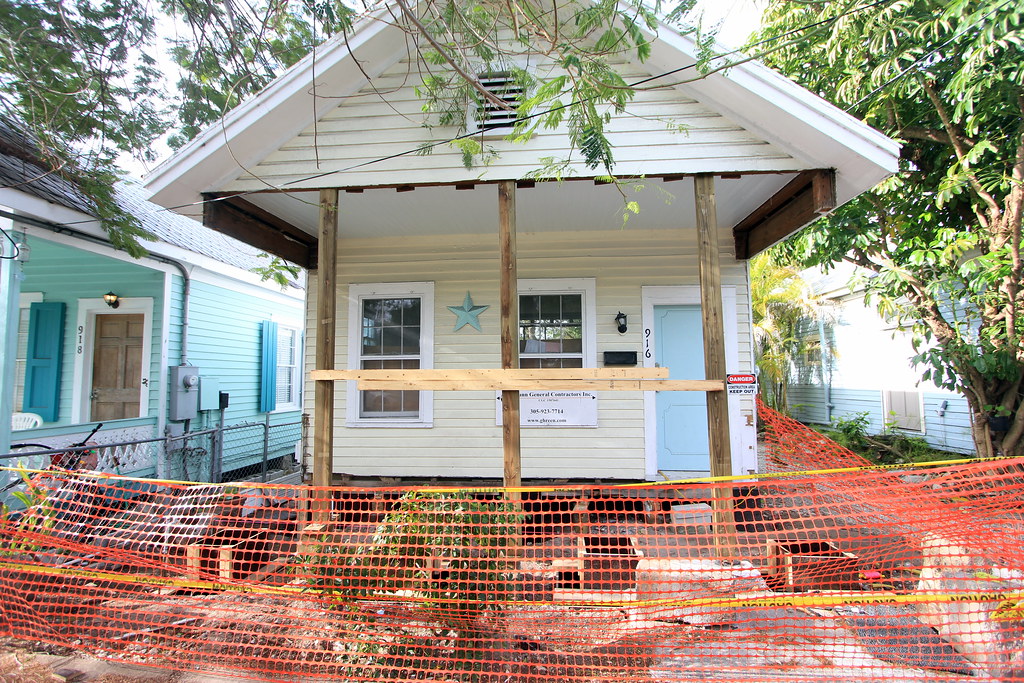 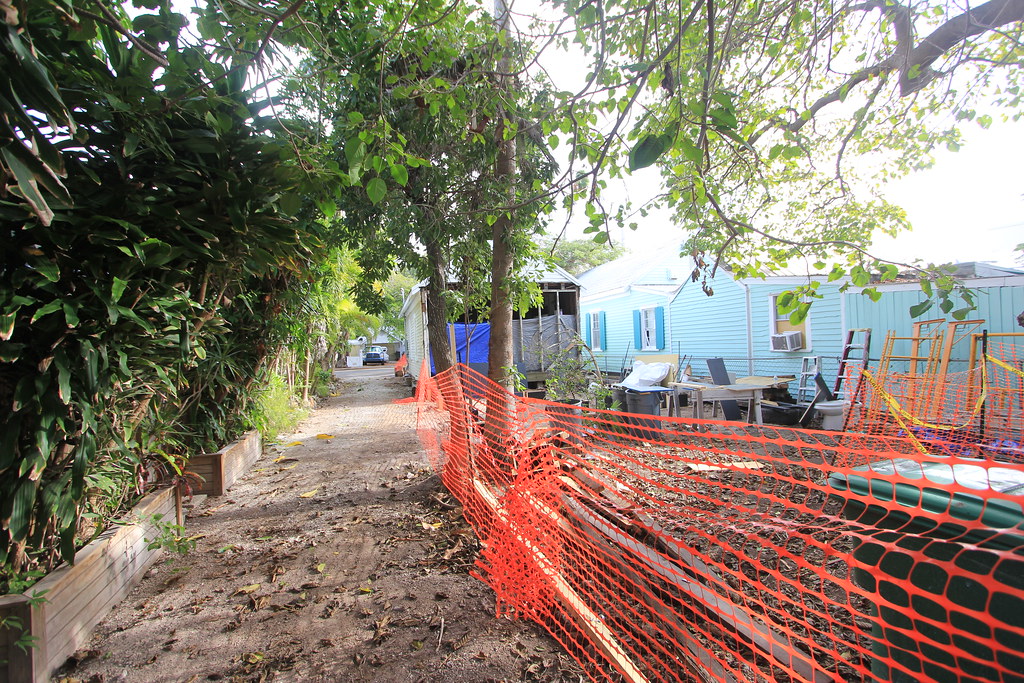 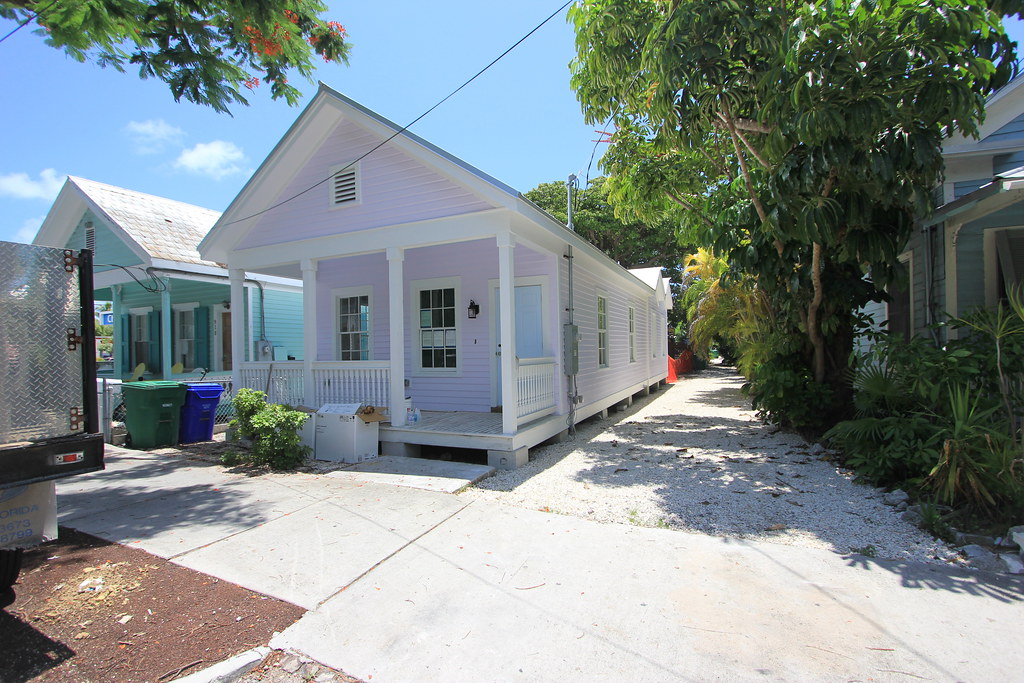 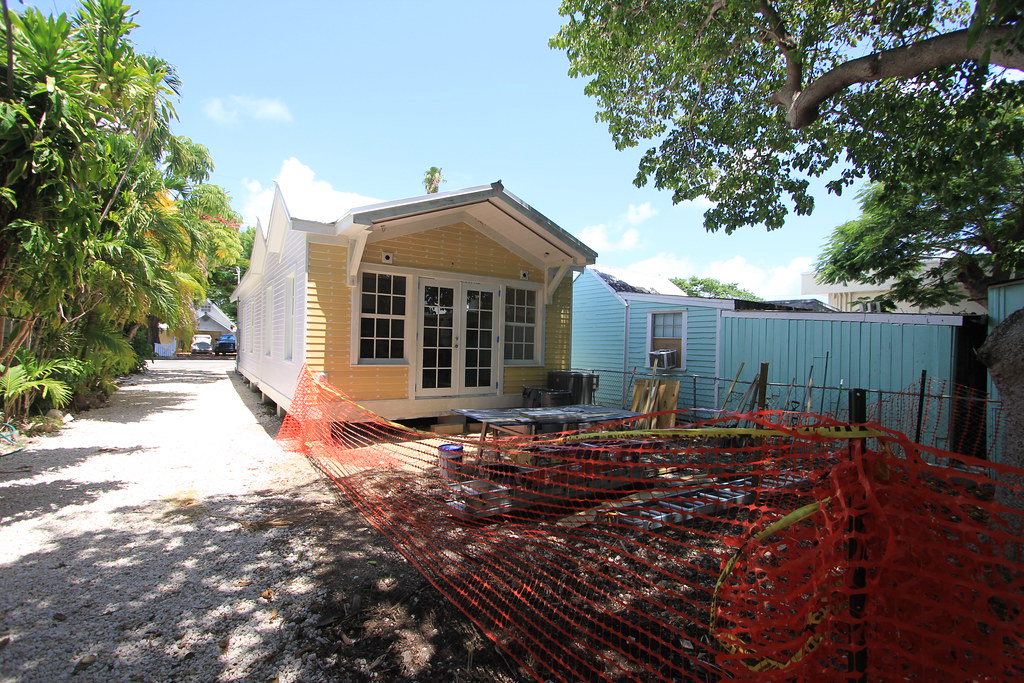 I am not being critical of  how long it is taking this contractor to complete the project. I think the crew has done a remarkable job. This contractor is not taking longer than other contractors. They all seem to take over one year to complete a renovation of a similarly sized cottage. Renovation of grand conch houses take much longer to complete. I also have been following a big house on Caroline Street for over two years. I drove by it on Sunday. Not much progress since my last drive by three weeks ago.

How is it that builders more than a century earlier could build entire communities with hand tools and building materials transported by boat compared to current day contractors with power tools and two building supply stores filled with everything they need to build a million dollar redo.

916 White Street will appear in my next Projects of Key West blog which hopefully will get published sometime before Christmas. 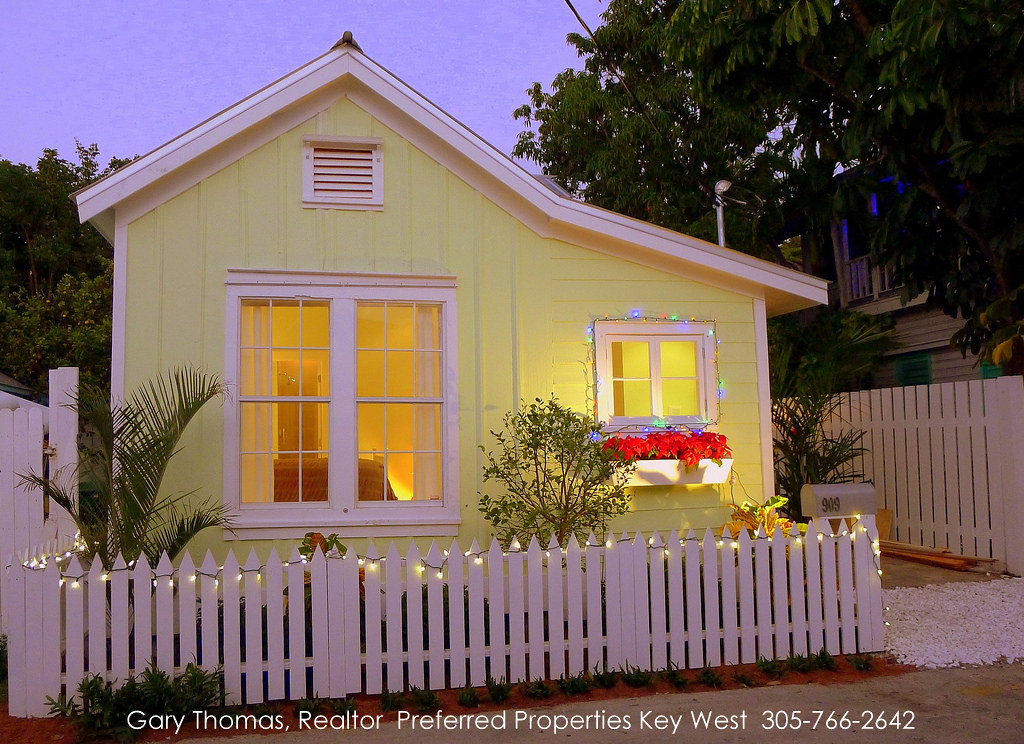 Hello Gary - your knowledge of local Key West history causes me to think about the difficulty of building back in the days before power tools and such were around.  I can't even imagine.  Resourcefulness comes to mind especially as the available resources were not abundant.

Good morning Gary. If this were government work you would have to pick which Christmas and 2021 would not be a choice! Just saying. Enjoy your day.

How interesting! My husband and I have discussed how difficult it must have been for pioneers to build log cabins in the west - especially when all they had were hand tools. No electricity. No nice big chain saws and lumber mills. No Lowes or Home Depot. The same with building on Key West way back when. They found a way!

You have a great knowledge of Key West.  Is there anything remaining of that once thriving cigar making business?

Ed, The cigar makers moved up to Tampa years ago. No local cigar production here. We used to have a thriving sponging business. That is gone as well. We do have a lot of tourists. They appear everyday out of nowhere.

Love these old restoration projexts.  So importnat for our histoey.   Have a wonderful Tuesday, dont forget the Tacos, but the important question is, Soft or Hard shells?  Thanks again for the blog.  Bill Salvatore