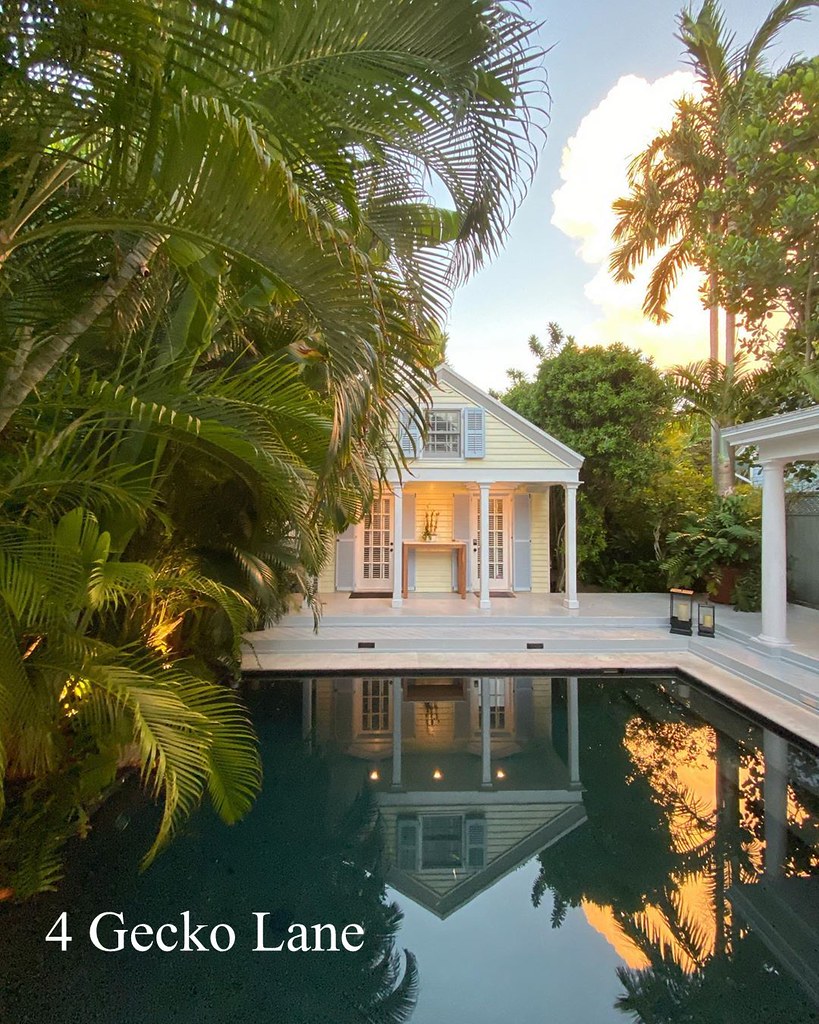 4 Gecko Lane is one of my all time favorite properties in Key West. I think I saw it the very first time in 2003 soon after it was listed for sale. It was at that time a one-of-a-kind property where two houses were made into one. A few other people copied the concept but the original remains the best. The property even appeared in Vanity Fair Magazine in the mid 1980s just after the initial renovations were being completed. Let's look at some photos to see why this home is so special. 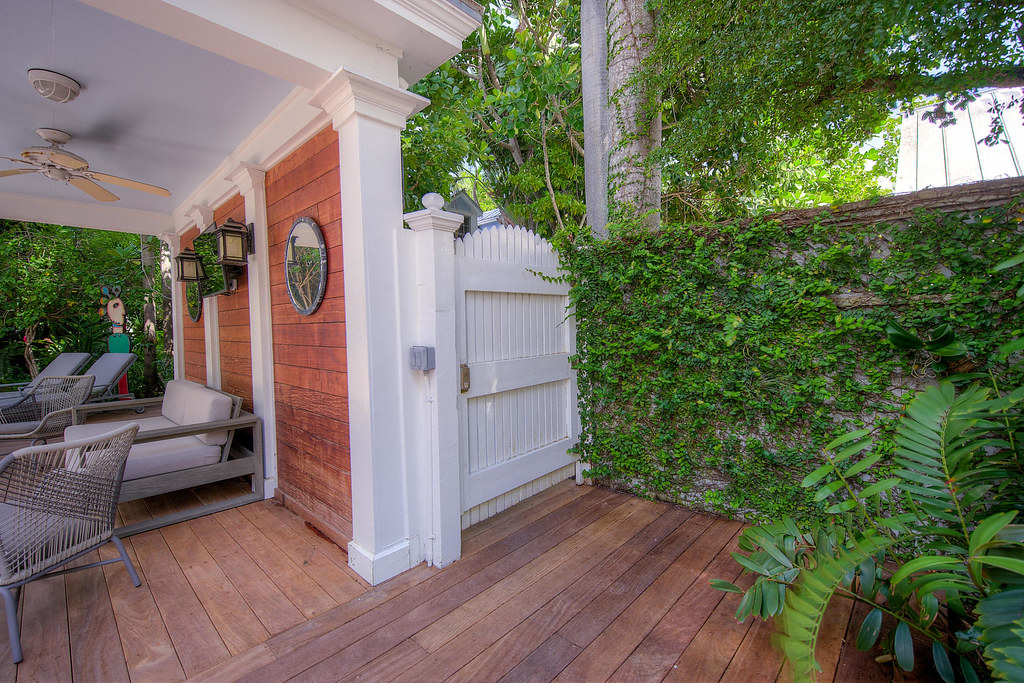 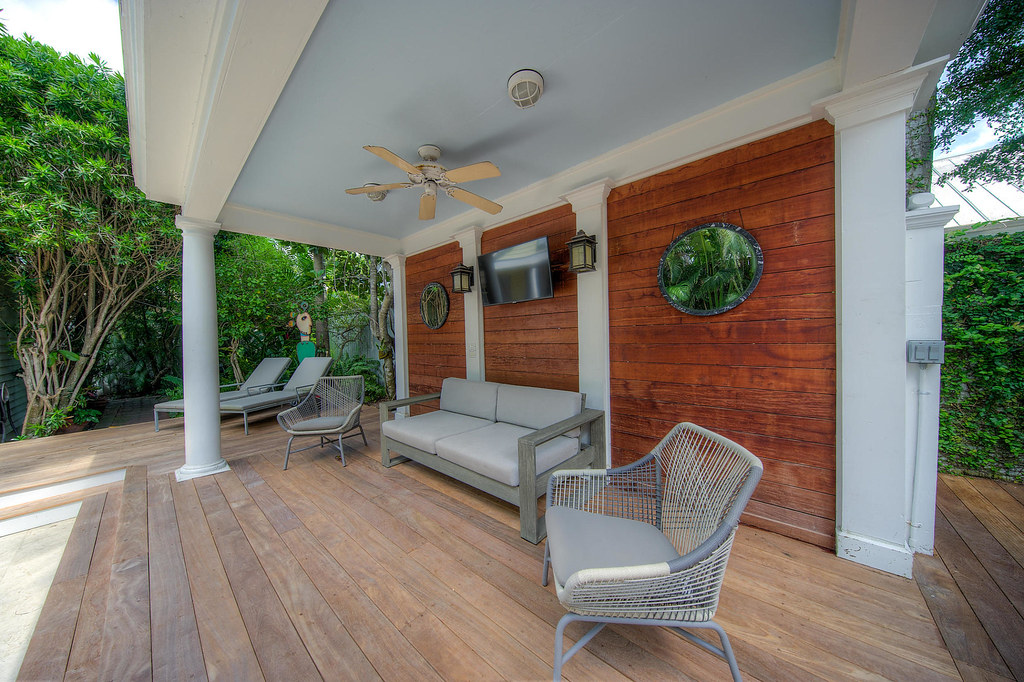 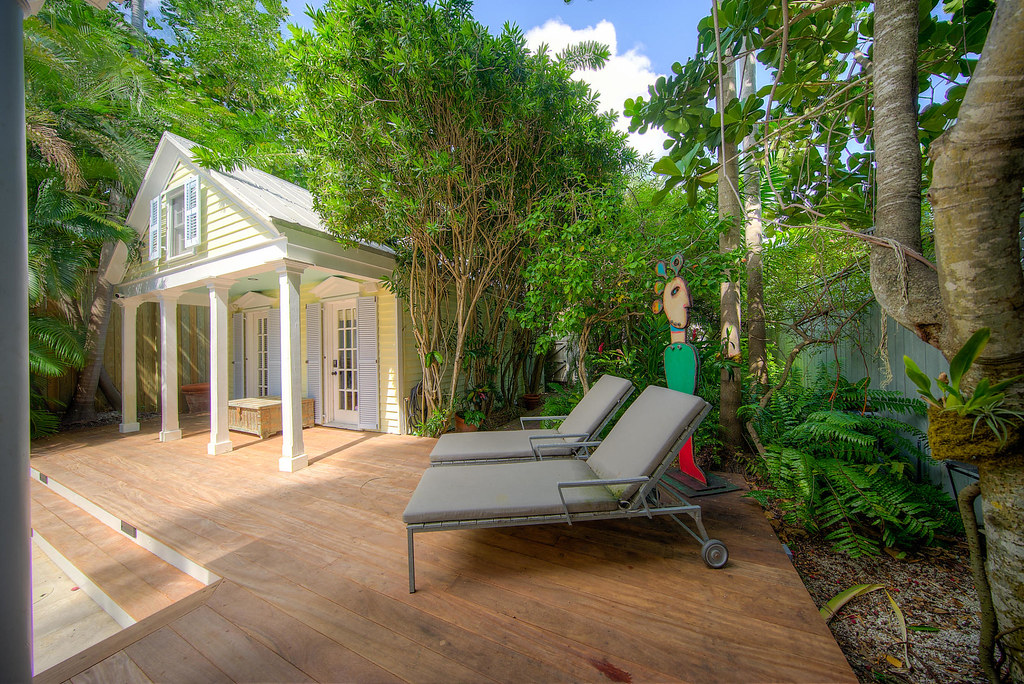 Gecko Lane is one of those Slow Lanes of Key West that I muse about. The lane is located on the north side of Eaton Street between Margaret and William Streets. If you blink while riding your bike or car, you will miss it. That is why locations like this are so sought after. They are hidden gems. Upon arrival at the front gate you enter a courtyard of what looks like three buildings separated by a large pool. As you move inward you see beautiful wood decks frame the pool as a piece of art. The gazebo at the side "connects" the master bedroom cottage with the main house. 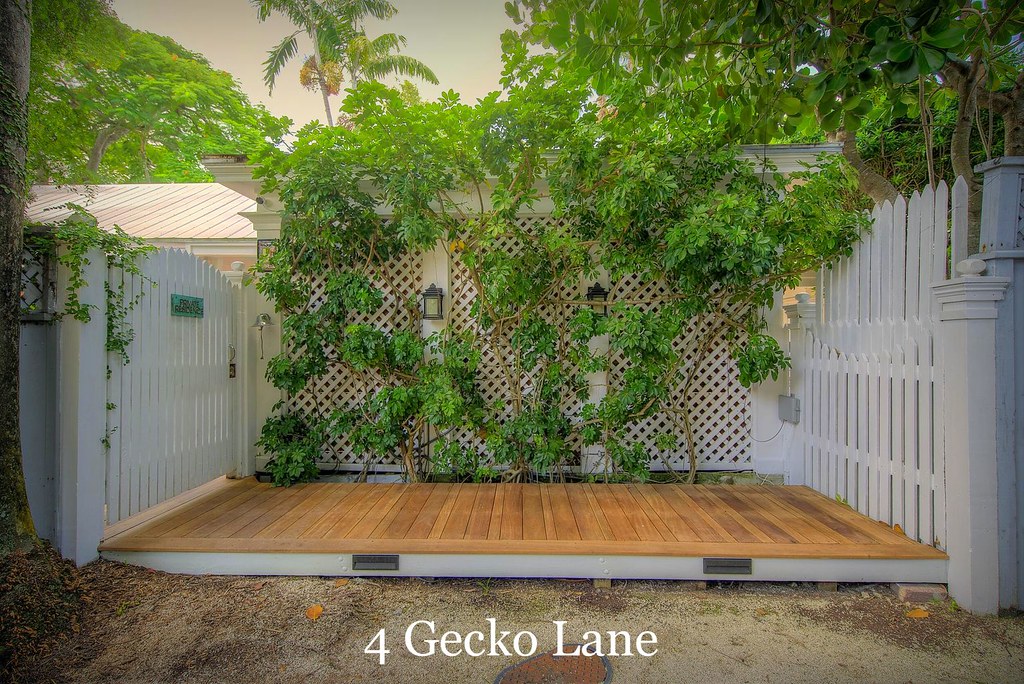 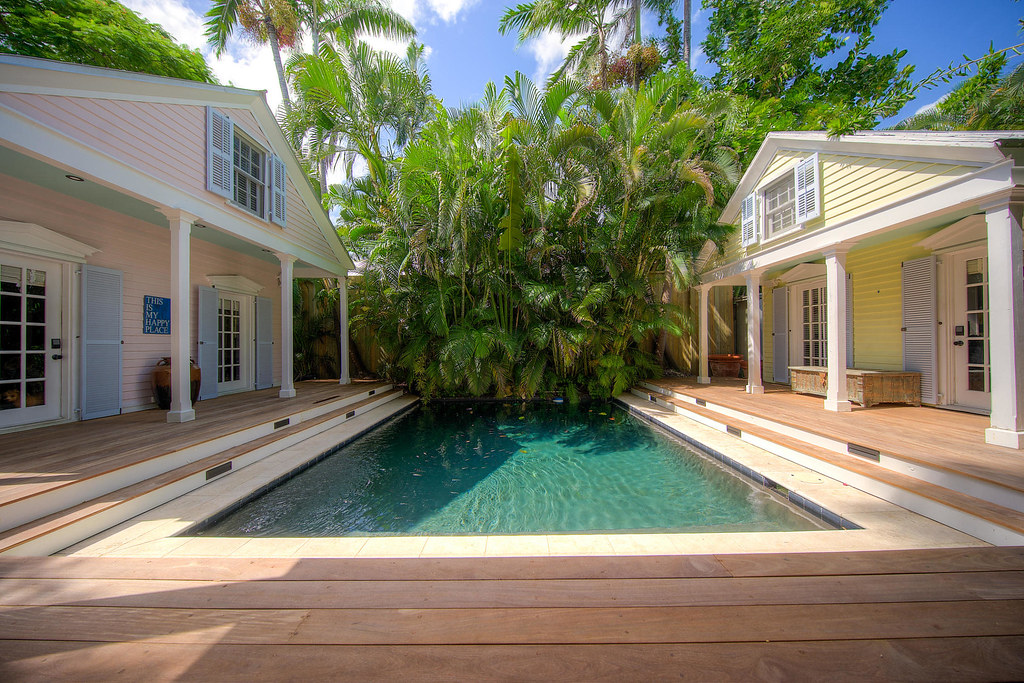 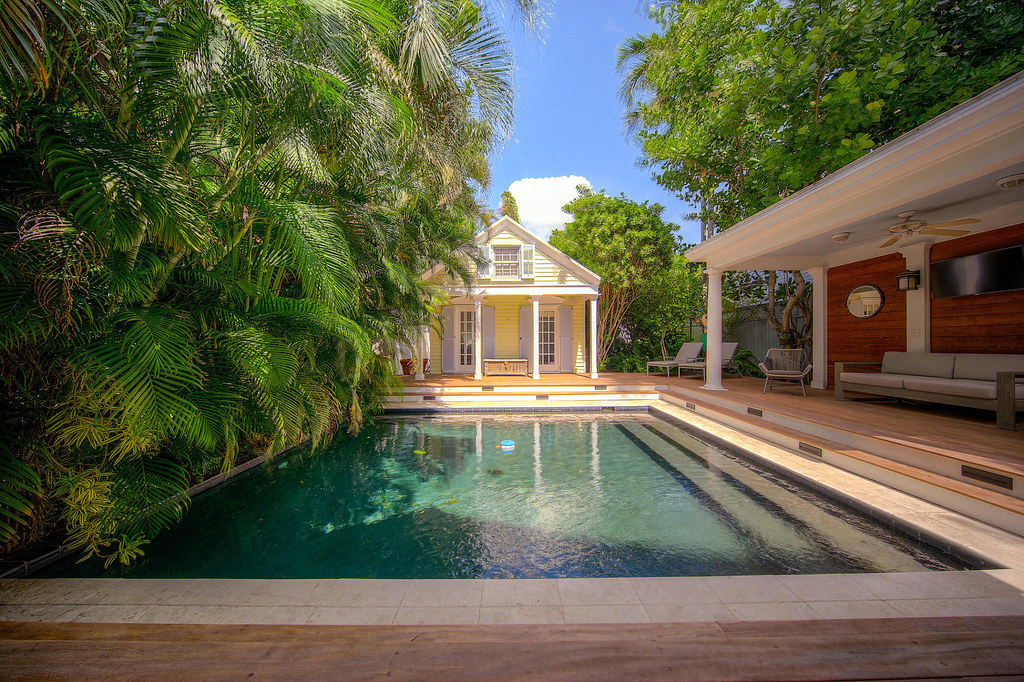 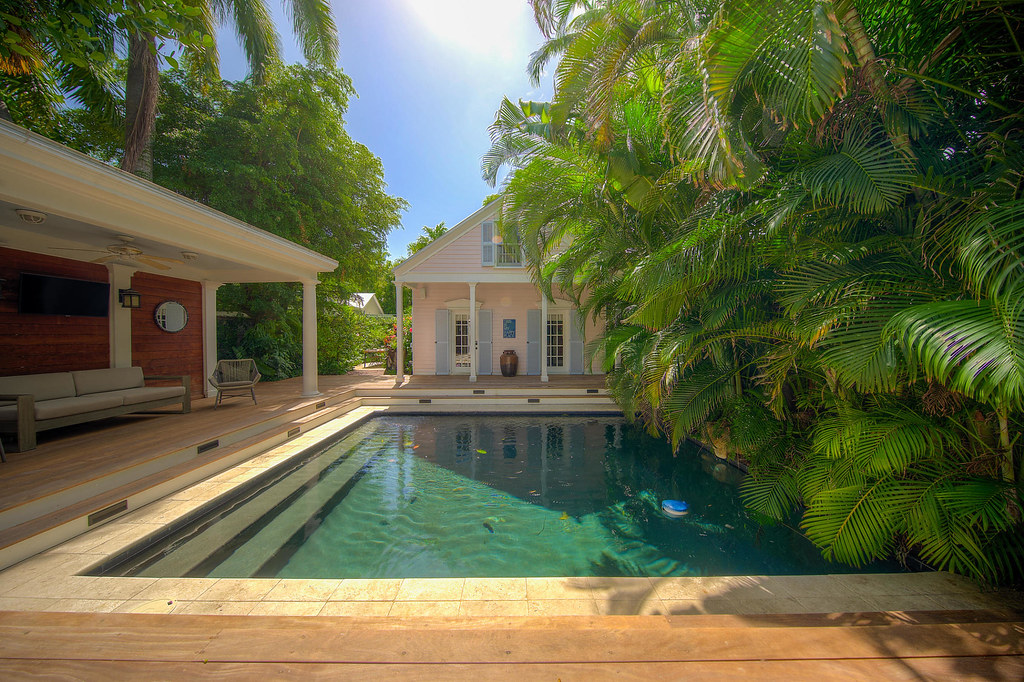 At first look you may think the property is rather confined. But you would be mistaken. The lot is actually quite large - 6,312 square feet. The lot is an irregular rectangle that measures 161' X 45'. There is a huge yard at the rear for parking access off Roberts Lane. And there are several garden areas, patio, and outdoor shower. It's not so small after all. 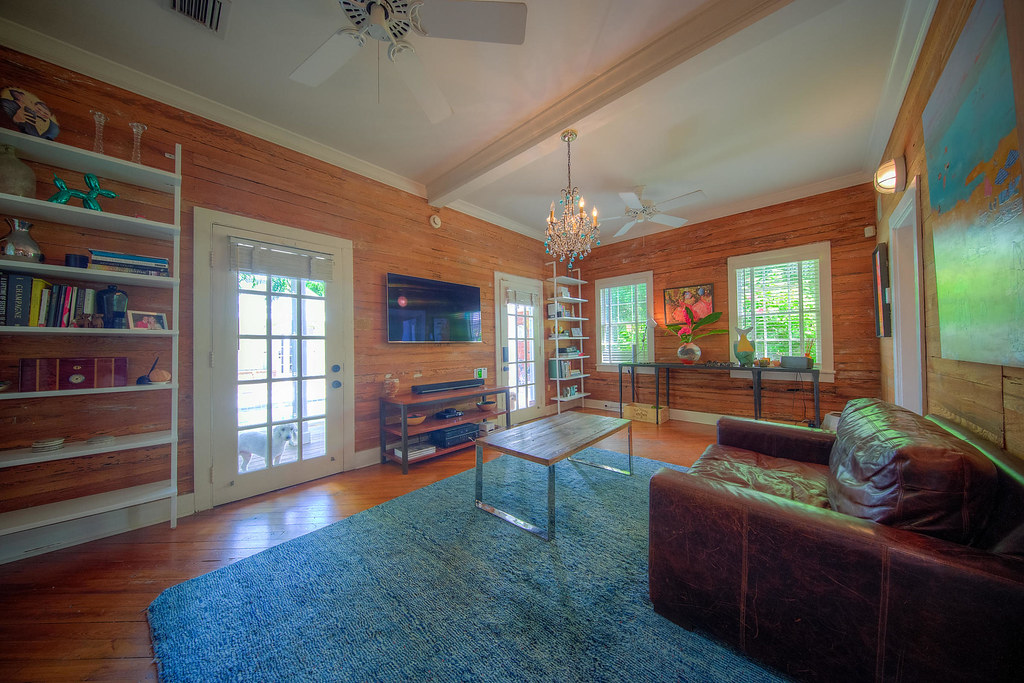 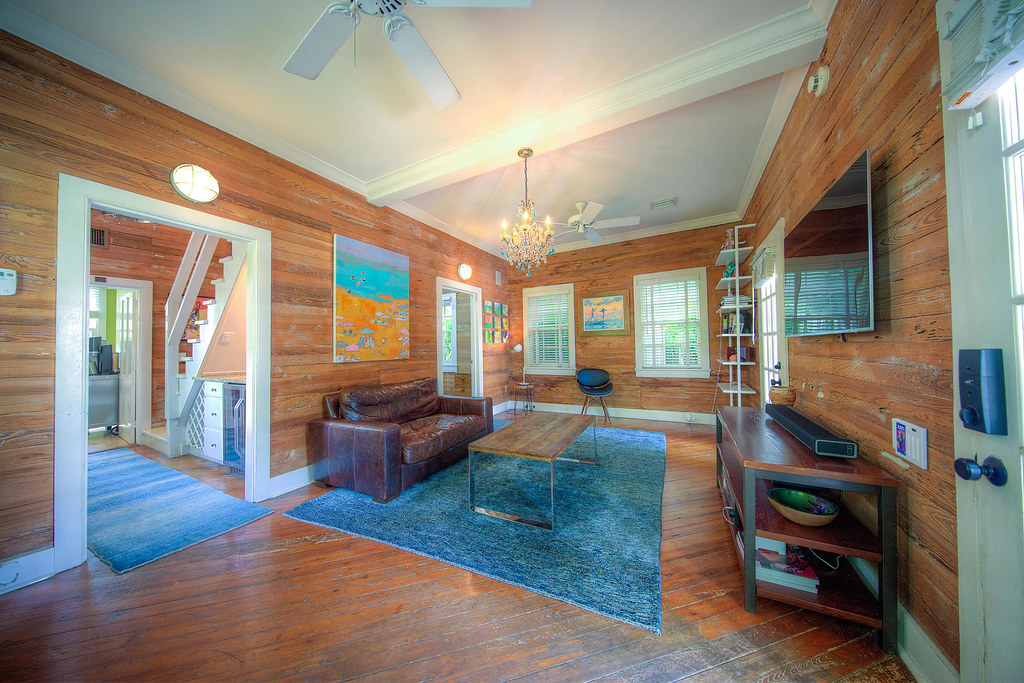 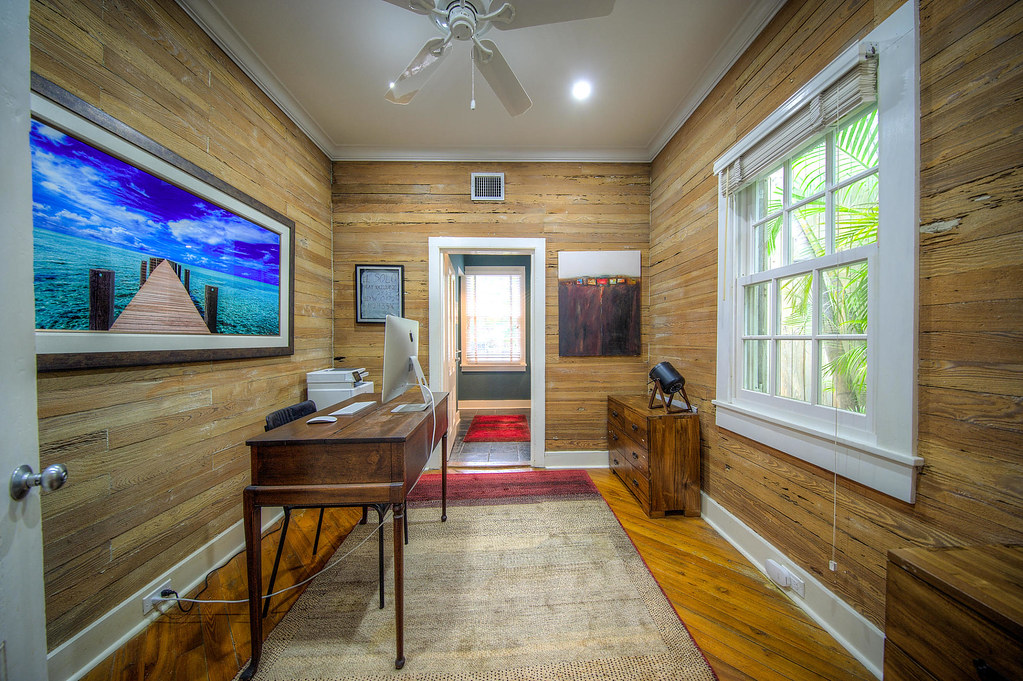 Once you step inside the main living area you will be awed by the simplicity of design. Dade County Pine is framed by crisp white trim, baseboards, and crown molding. One of the two guest bedrooms is located just off the living area which has an adjacent bath. 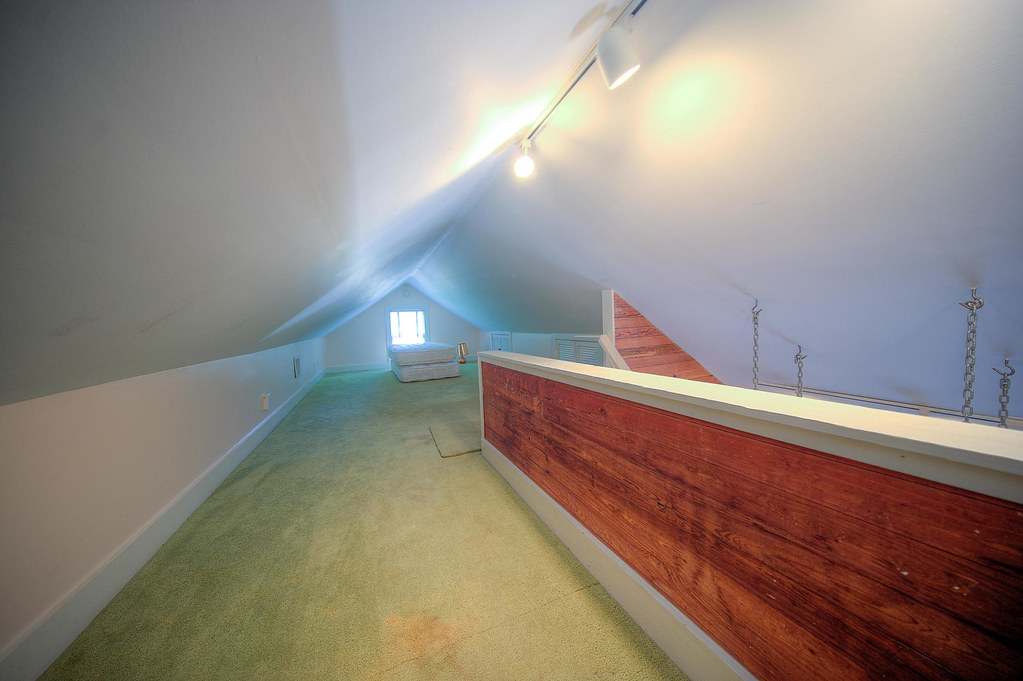 A second guest bedroom is located on the second level. I find these spaces just special for brothers-in-law. I think grandchildren would love this space. Kids dig privacy and unique spaces. 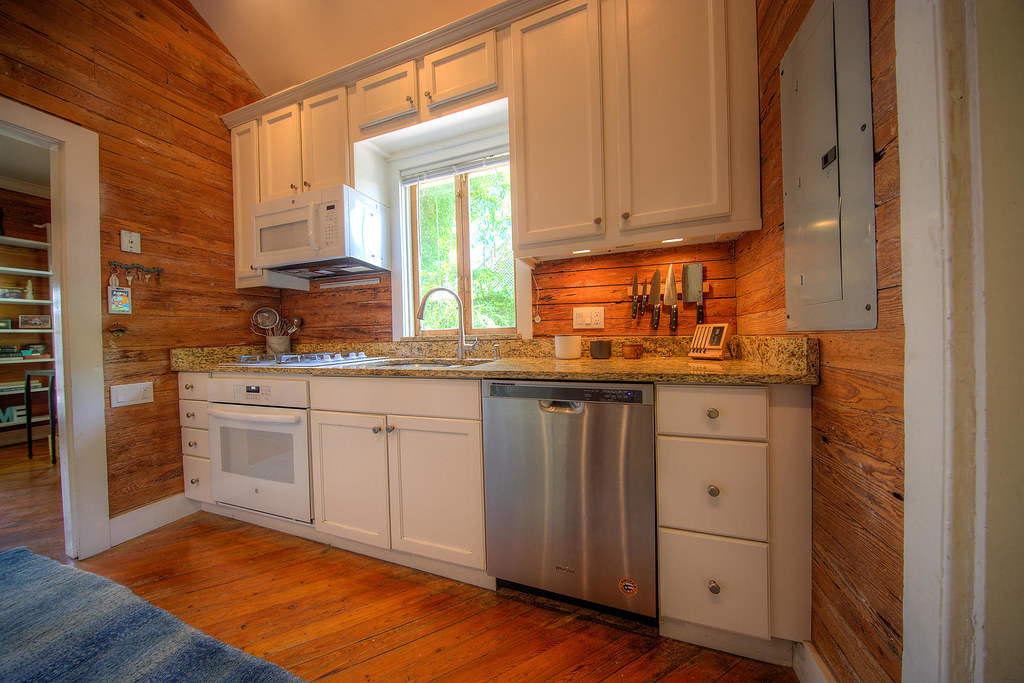 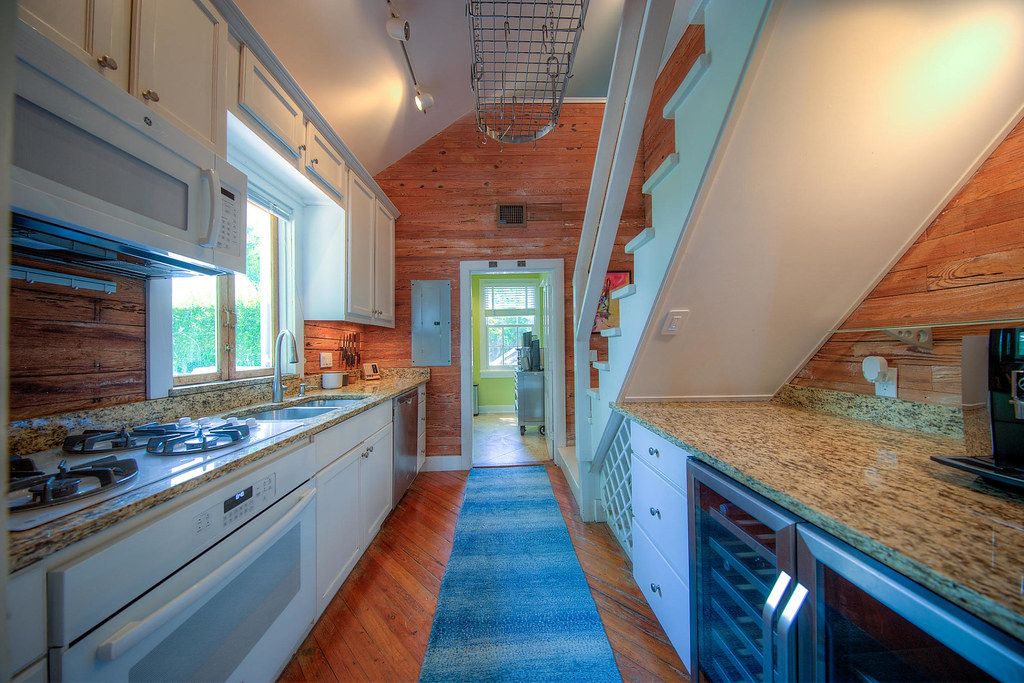 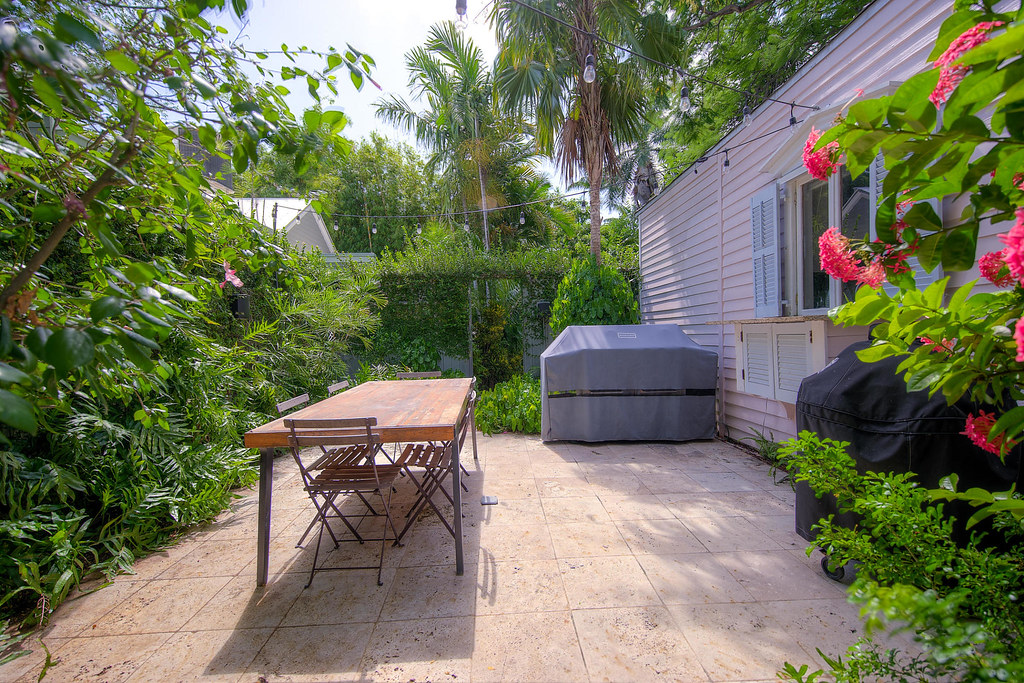 There is lovely patio opposite the kitchen with a portion of the garden in view just beyond. Tropical foliage envelopes the entire lot. 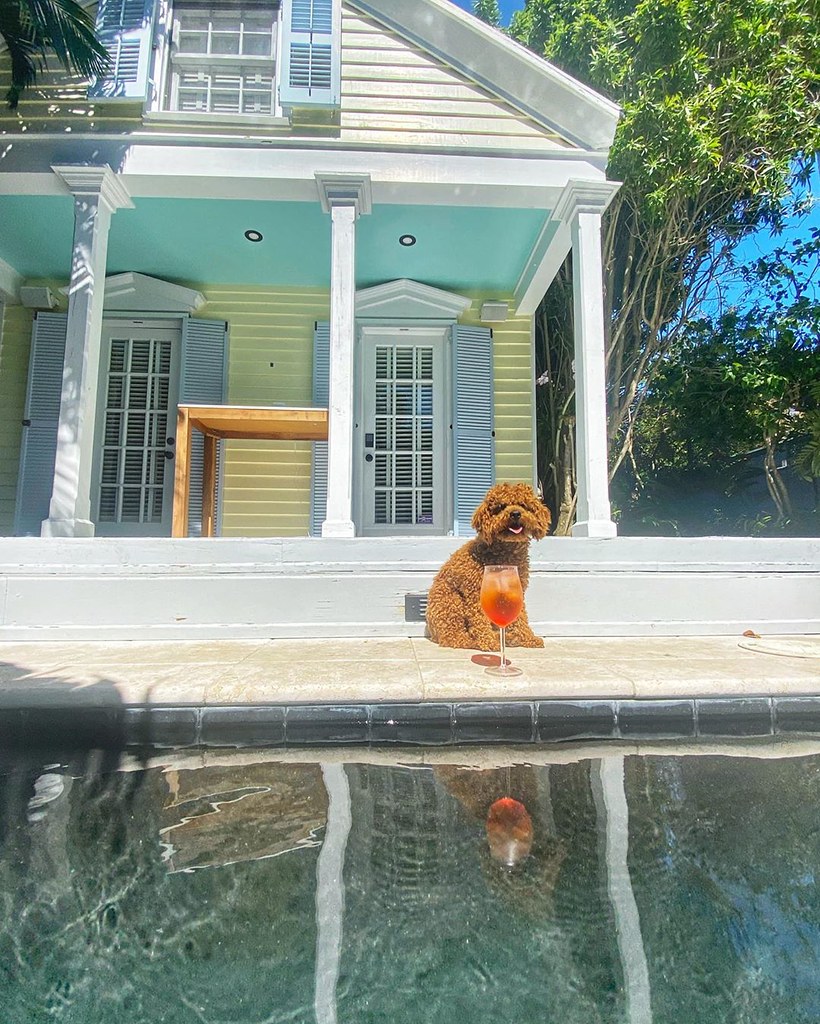 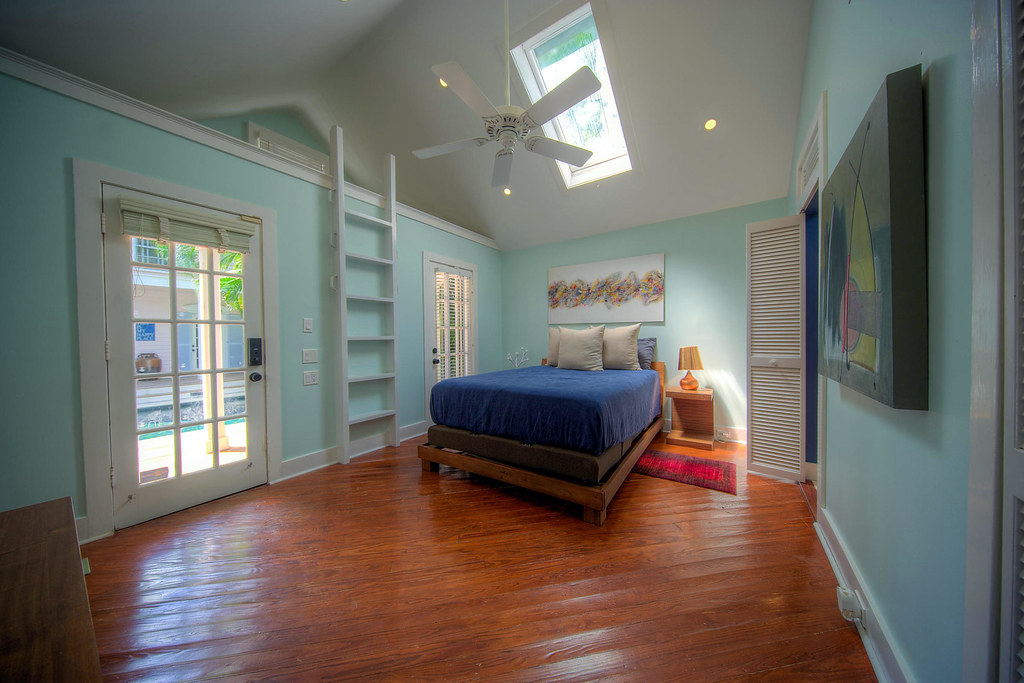 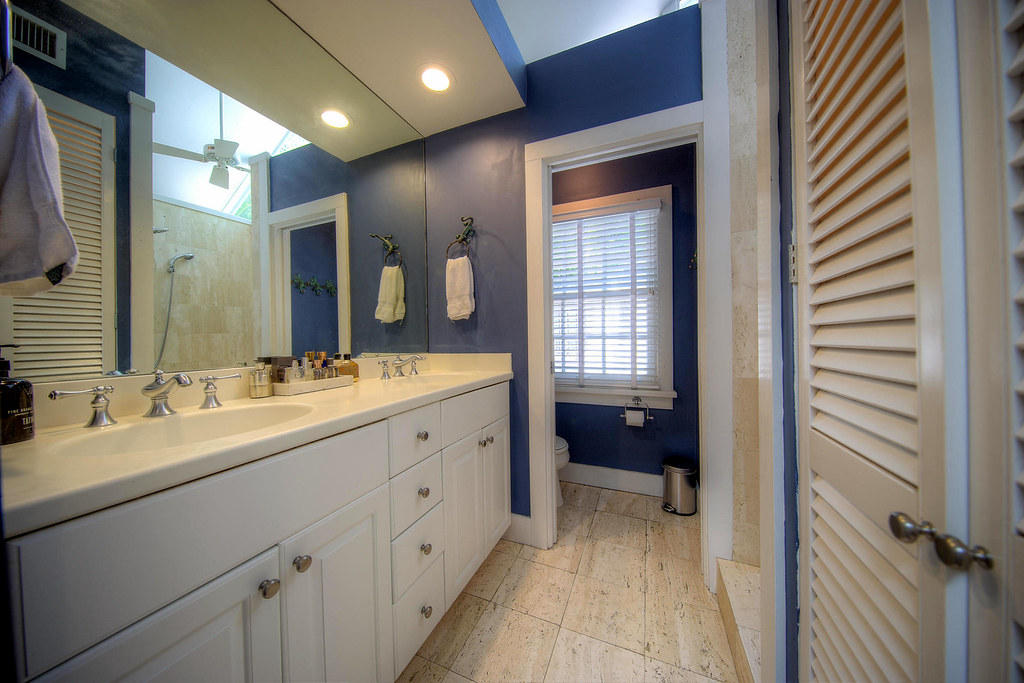 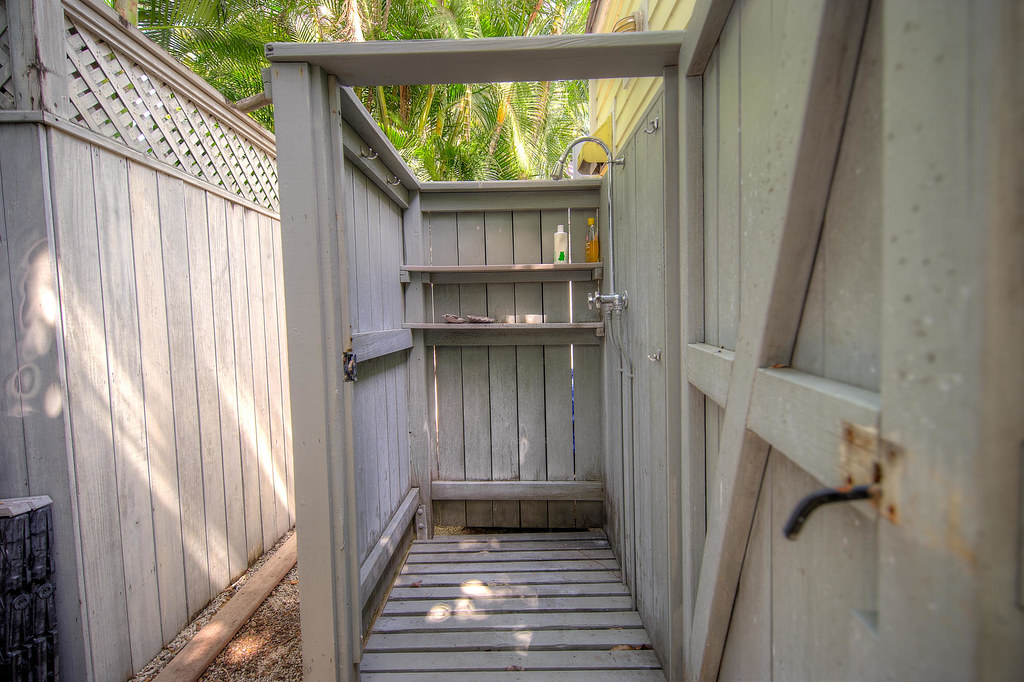 Even though the master bedroom has a cathedral ceiling, the area is quite cozy and romantic. Imagine opening the door for a late night dip before going to bed. The master bath has two sinks, lots of storage, a marble bath, and separate WC. If you are like me, you will prefer the outdoor shower. There is nothing like showering under swaying palms or starry nights - especially when people up north are freezing in the cold of winter. 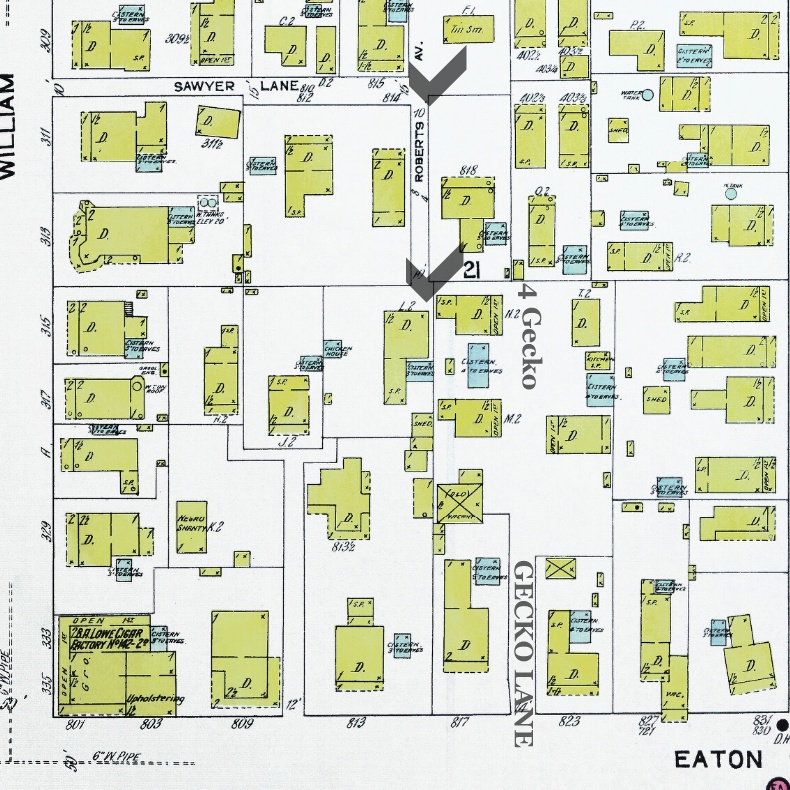 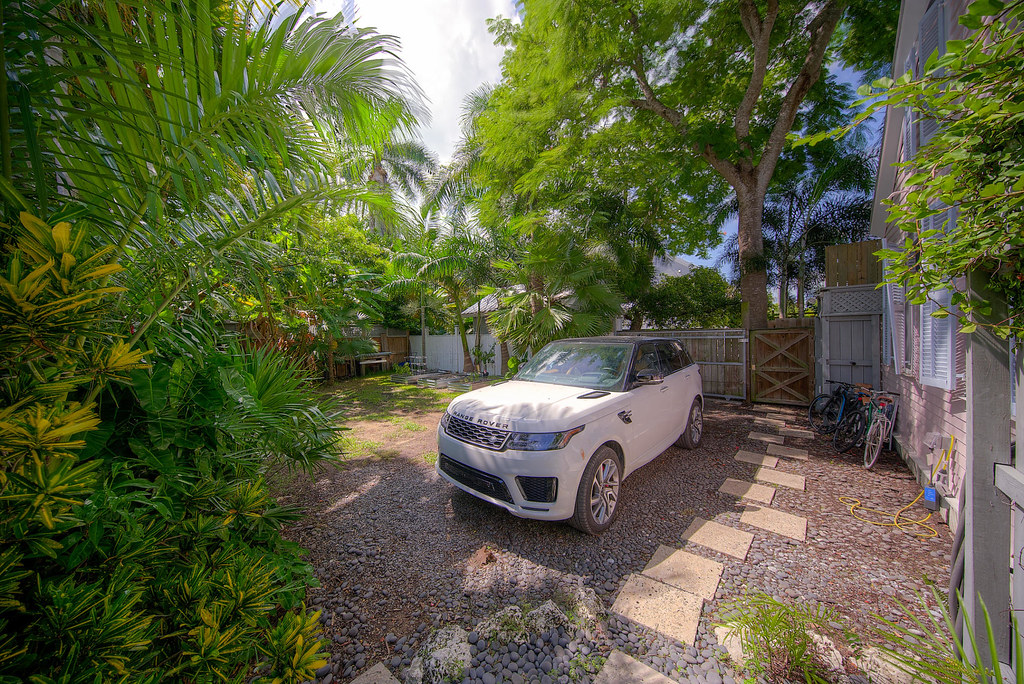 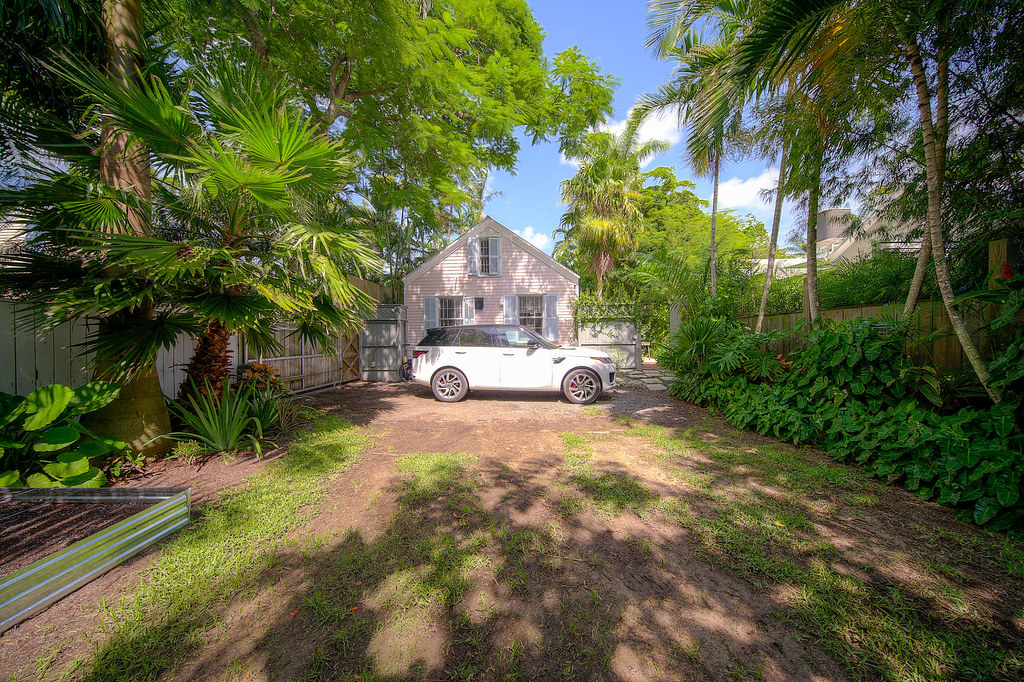 I searched the Historic Sanborn Fire Maps to try to determine when the cottages were built. The county tax records suggest the houses were built in 1925. But the 1912 Sanborn Fire Map shows both cottages existed as of that date. The lane was little more than a walkway and was not given a name of record. I added arrows to show Roberts Lane which now has an electric gate leading that opens into the rear undeveloped lot at 4 Gecko Lane where the current owners parks the car. Roberts Lane exists onto Caroline Street. The Key West Seaport begins there. Duval Street is a five minute walk from Caroline or Eaton Street. Nothing is far away. 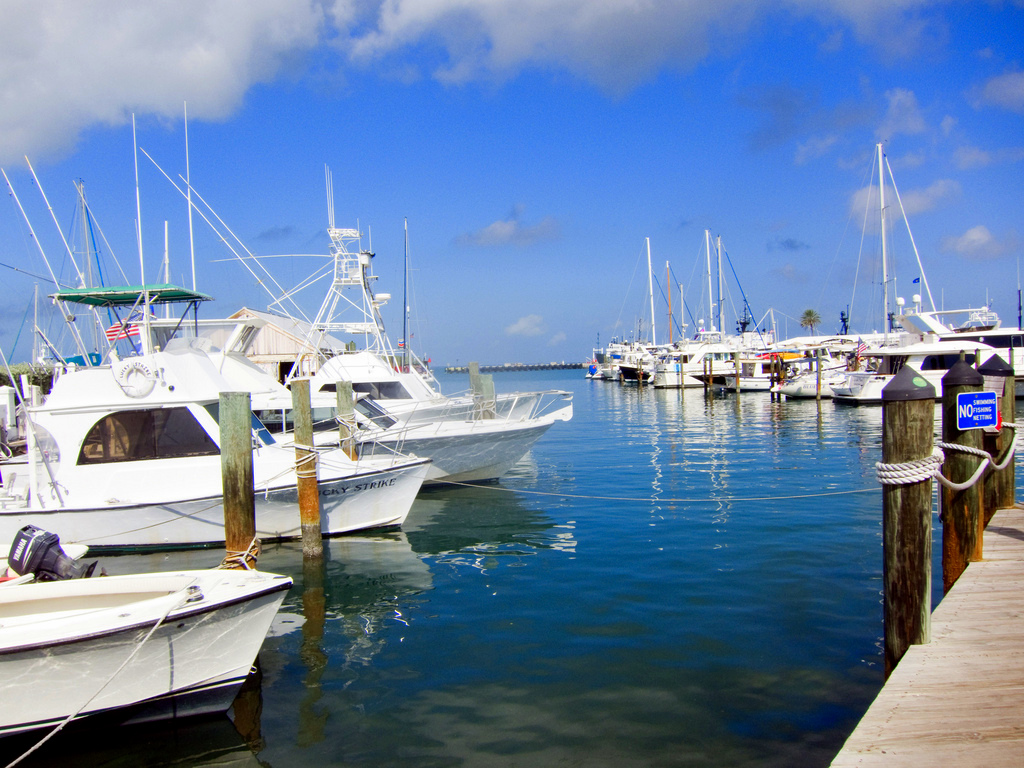 CLICK HERE to view the Key West MLS datasheet and lots of photos of 4 Gecko Lane, Key West offered for sale at $1,749,000. Make sure to read the listing details as this house has been significantly updated. Then please call me, Gary Thomas, 305-766-2642, to schedule a private showing. I am a buyers agent and a full time Realtor at Preferred Properties Key West. 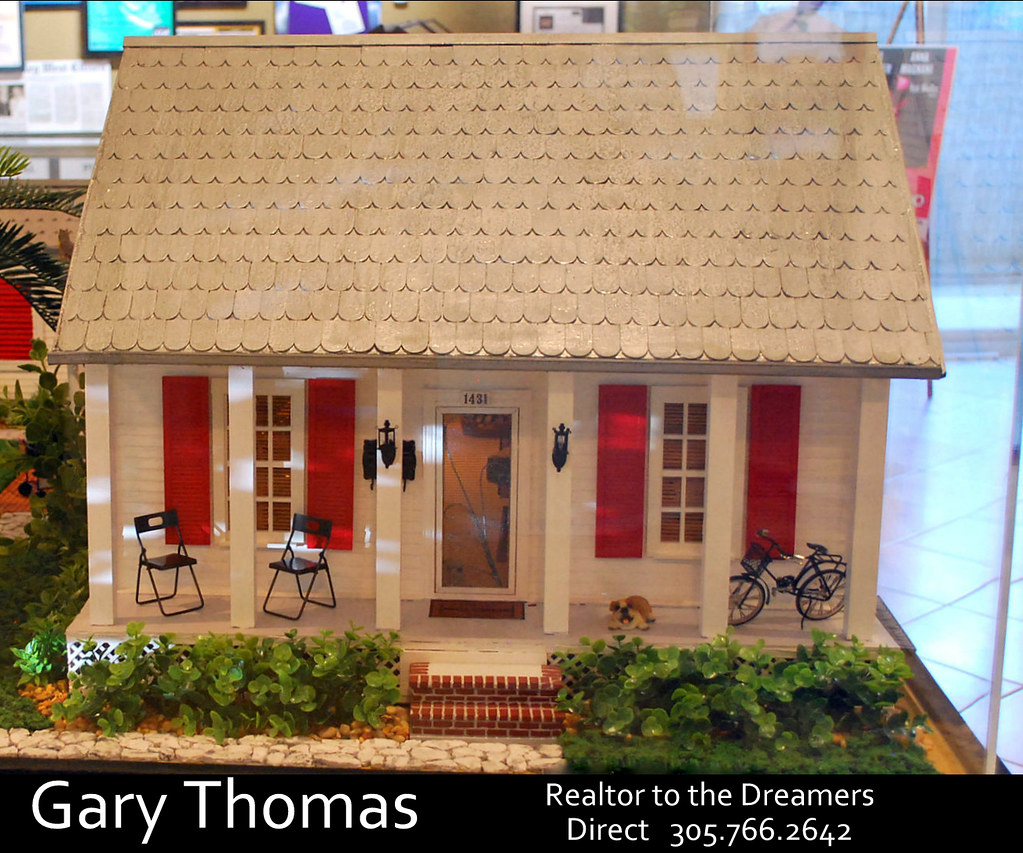 Hello Gary - it's easy to see why this property evokes a very special feeling for you.  The setting is idyllic - maybe even quintessential Key West(at least in my mind as I have never been there).

Of course, the street name makes me think this compound would be an ideal advertising vehicle for GEICO Insurance.

Michael, I was totally taken in the very first time I saw this place. Two small houses separated by a beautiful pool. Palm trees enveloping the property. Something out of South Pacifc. But in America.

I guess falling in the pool would be a potential issue! haha

Good morning Gary. Must say, if you endorse it, it is without doubt a winner. Enjoy your day.

What a beautiful home! The "hidden gem" feature would definitely be a plus, and the fact that it's basically hidden by all that beautiful grenery. PLUS there's a wine refrigerator in the kitchen - And an outdoor shower - AND parking on the lot! I hope the right buyer calls you for a showing TODAY.

Kat, That is your house. I see your name on the front entry.

Congrats on the new listing! Good luck closing on it soon.

Gary Thomas congratulations on this listing.  That pool will get a lot of use in the warmer months.