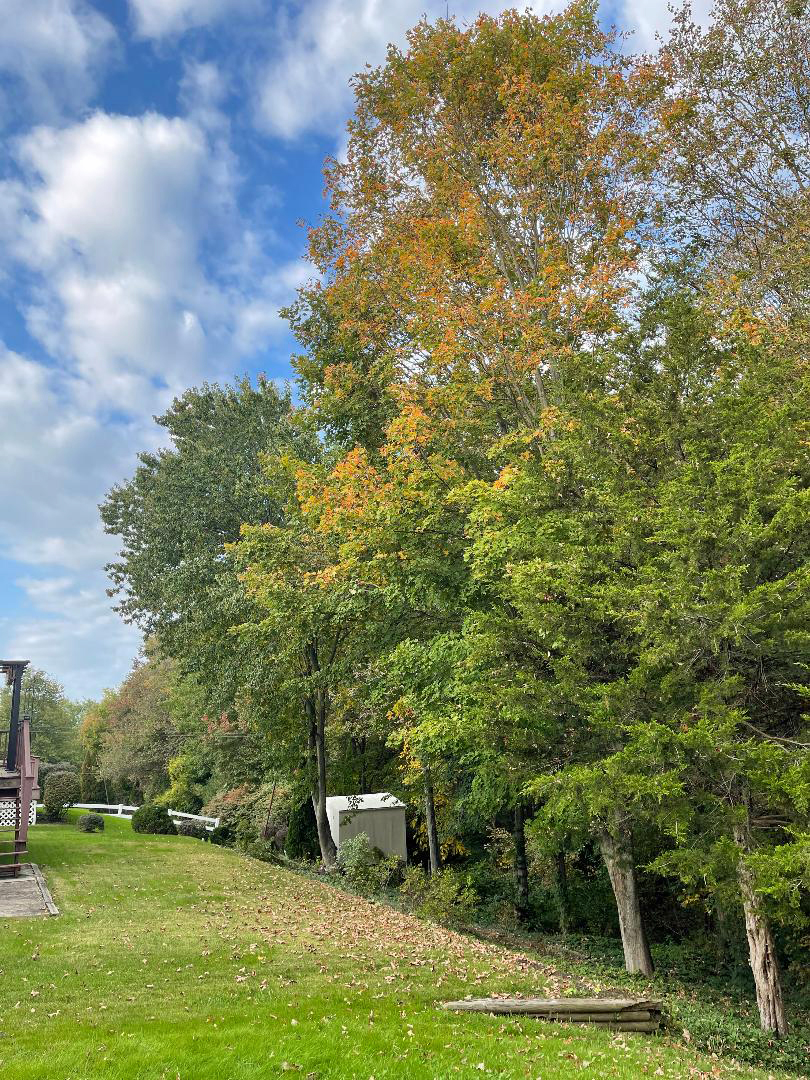 The first picture for this year's Progression Of Fall Colors series (see picture below) was taken last Wednesday just as the colors were starting to change. This week we can begin see to see a more definitive change in the colors, and I would expect to see a much more noticeable change by next week.  What is different this year from last year, is the closest maple tree is change color before the other trees, and it is normally the other way around.

As I have done for the last eight years, I will continue to post pictures of this same spot at different points throughout the Fall to show the progression of the Fall colors.  Fall is a beautiful time of the year in New England, and even though the last couple of years have been better than the previous years, they still have not been what I had hoped for.  I have become spoiled by the beautiful colors we normally see during the Fall, so I am hoping this year the colors are truly outstanding.  My favorite colors are the trees with yellow, orange, and rust color leafs when they blend together.

Anyone planning to come to New England to enjoy our Fall colors at their peak, should plan on coming between the last two weeks in October to the beginning of November.  However, the trees seem to be turning color later than normal this year, I normally would have posted this first blog at least a week ago.  It is still to early to get a feel for what the colors will be like, but I will be trying to show the progression of the trees as they turn colors throughout the Fall.

Fall Has Arrived In Middletown, Connecticut and I hope you follow my series of the change in Fall colors starting with this First Blog Of The 2021 Progression Of Fall Colors In Middletown, CT.

Beautiful!  The color of Fall brings back my memory of living in Boston for 13 years. It was the hard winter that pushed me out!  Thank you for sharing, George.

Wow, and I am looking forward to the nex batch of photos.  Wishing you a wonderful weekend.  A

Nice.  Very creative thinking.  This will be my first year to enjoy the series and looking I am forward to it George.  Mark

Wow, that’s a pretty big change since the last post. Fall is marching on!

Hi George,  Thanks for sharing your progression of fall colors.  Always peaceful to enjoy the beauty of autumn.  I always enjoy this series.

George- I see a change and can't imagine what the next photo will look like!!!!

Hi George - that reminds me that I was going to take progressive picture of my maple tree.  Still time.

Good morning, George... can't wait to see next week's photo... I have a feeling we will be seeing a real difference.

I like seeing the changes and the color is definitely coming!  I enjoy that you share this progression with us!

Hello George - idyllic.  And each week I am sure that will continue to grow in appeal.

Nice, I am actually going to be in Upstate NY next weekend, so hopefully I will see some wonderful colors.

Enjoy the colors of the season with your camera in hand.

Ilike to come back to New York and see all the foliage at this time of year!

I had a need to travel to Northern California, about a 100 miles North of Lake Tahoe over the last few days. Fall colors are very noticeable there. We see some change of color in my local area but nothing like I experience in my travels, and you are experiencing now, George Souto.

Hi George Souto - Waiting for the trees to change is always a pleasure to see.  Happy Thursday!

George I am so glad I am not loosing my mind and was not drunk... just busy and missed the second post:)Endre