"Through the crystal-clear air Lori could hear the ringing of the agent's bell...that had begun when the package had first been sighted, carefully picking it's way past the outer reefs toward the lighthouse at Whitehead's Point." 401 South Street, Key West sits opposite what was once called Whitehead's Point. Tourists from all over the world come here to take photos as a remembrance of the best vacation of their lives. I would suggest the ideal buyer must really like people because people will stand across the street from your home every day to take photos of themselves for as long as you own the property - or as I did the wee hours of the morning when nobody, not even the who wakes up our chickens, was awake. But at night when the tourists have moved down to Mallory Square to view the amazing Key West sunset, you will have the view of the old Whitehead's Point to yourself.  You can watch the nightly sunset from your main level or second floor balcony with a view nobody in Key West can ever have. The balmy breezes from the Atlantic Ocean will brush the palms that flank this corner property.  At night after the tourists are gone you will hear the sound of tiny waves as they lap the coral rock where South Street and Whitehead Street meet at the place now called the Southernmost Point. This is the yin and yang of this property. The original house is constructed of Indian Block, a man-made material similar to modern concrete block except that Indian Block has a finished decorative carved-rock aspect. Over the years the original front porch and second floor balcony were modernized as is shown in the 1965 black and white photo.   What you may not see unless you look at all the photos with care is that 401 South Street has three bays: The front bay is obscured by the enclosed front porch. The east side bay is not visible from the street whereas the west bay is quite prominent as it can be viewed by all. The immediately above photo shows the front bay on the main floor. The house plus the rear bungalow have been divided into three legal living units. The first floor and second floor currently used as separate apartments and are pretty much carbon copies of each other as to interior layout. The original interior staircase has been removed, but a portion of the stairs still remains. Re-installation of a staircase would be fairly simple were a new owner want to restore this home back to a single family residence.  Note the extra large crown molding that wraps the front bay. The crown molding can be found in all first floor rooms. I did not take a tape measure with me when I photographed this house. My guess is that the ceiling height on the main floor is at least ten feet tall. The above photo was taken in the dining room on the first floor. The west bay window is visible on the extreme left. The front porch is enclosed with screen. Even the screen can't diminish the view of the ocean. The west second floor bay shows the superior condition of the Indian block construction. The next photo shows some of the original detailed stone work that is still in excellent condition. It would be interesting to see how a current day architect might reinterpret the original porches to restore some of the historic appeal of the house while retaining privacy for a new owner. A simple bungalow is located at the back far east side of the lot. This space is basically an Old Florida bungalow with grassy yard, palm trees, and louvers that keep the sun and rain out but that allow air and sunlight in.  Ralph Lauren would have a field day decorating this little gem. The bungalow would make the perfect guest cottage. There is plenty of room for a pool and still retain off street parking for two cars. CLICK HERE to view the Key West MLS sheet for 401 South Street, Key West now offered at $2,895,000. Photos in the MLS link show the house as it is today rather than when I photographed in 2014. Better than looking at photos or reading a blog, please call me, Gary Thomas, 305-766-2642 to arrange a private showing of this special home. Today's blog is an update of one I wrote in 2014 when this house was for sale then. The current owner updated the house after that purchase. But it still remains three units. It deserves more. I am a buyers agent and a full time Realtor at Preferred Properties Key West. 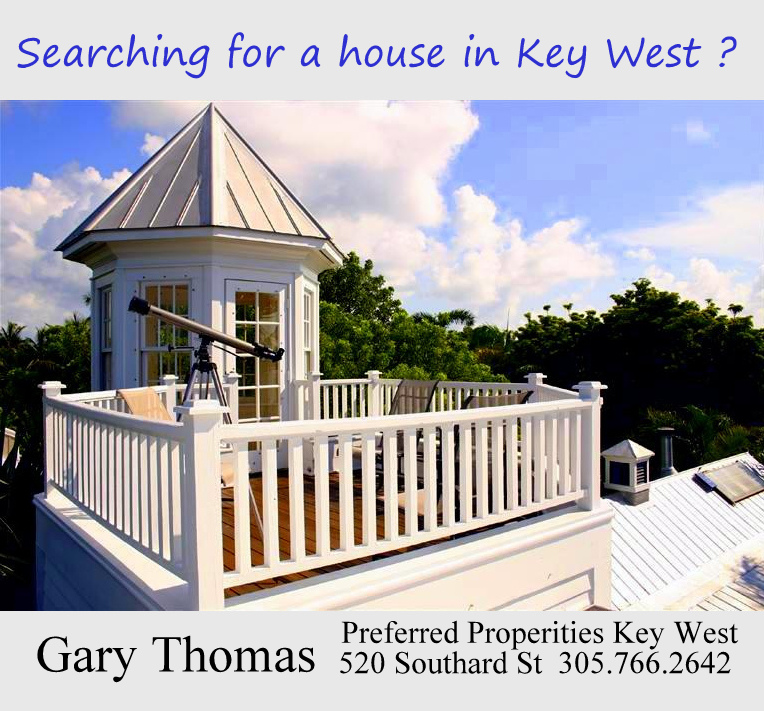 Good morning Gary. Your historical knowledge of Key West real estate coupled with that giant shoebox of photos makes one wonder why a buyer would seek the counsel of anyone else. Enjoy your day!

Hello Gary - just when you thought of things as ideal in Key West, the recent price reduction of this property tells us that those things can get even better.  But - remember such things in real estate may be here one moment yet gone the next.  Be decisive.  Act promptly.

That certainly sounds like a unique house in a unique location. I hope the buyer calls today!

Wow, what awonderful home.  Good luck with a contract and ecrow.  Bill

Hopefully the new price will garner some attention and you find your buyer!