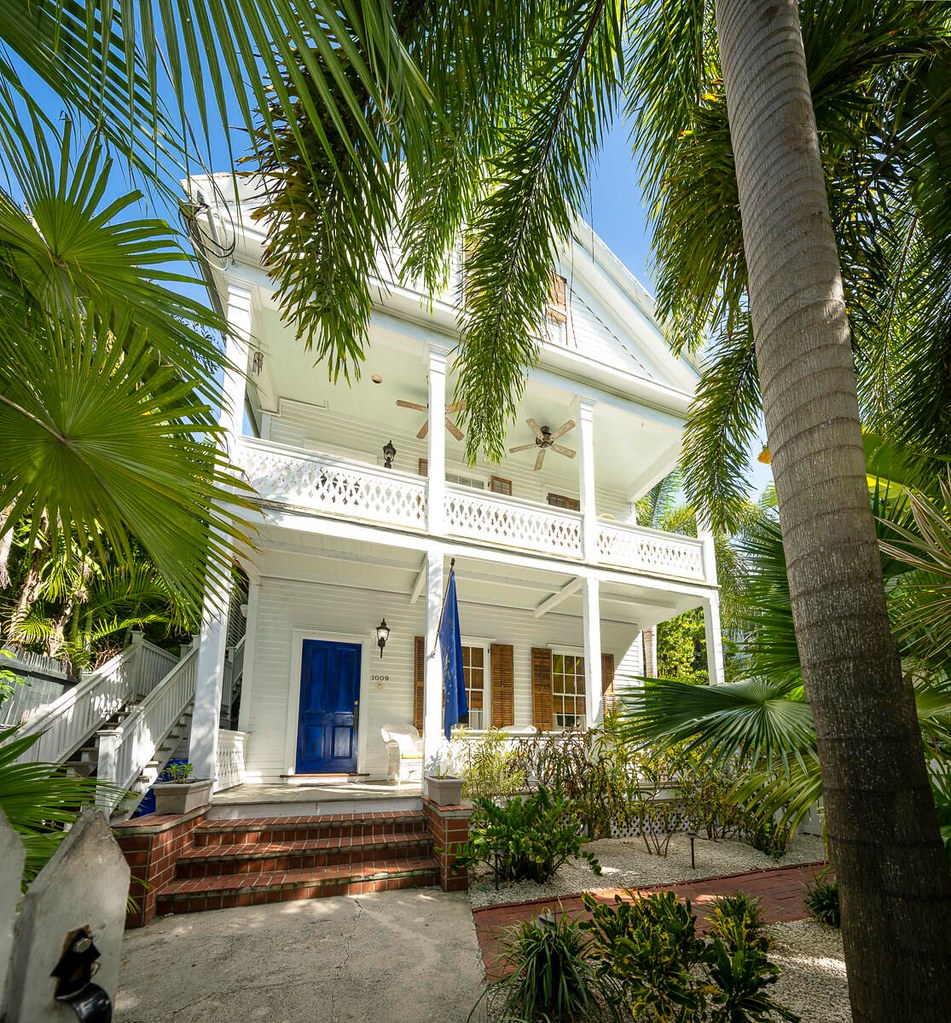 1009 Southard Street, Key West, Florida as it appears today on one of the most important blocks as far as Key West architecture is concerned. I wrote about this house in my blog many years ago. I recently showed it and was reminded of all the potential this house had then and has now. Like many old homes in Key West it was re-purposed by former owners many years ago but retains critical usage advantages today that give a future owner multiple options.  When we look at the historic photos below you will see how the two buildings changed and how those changes may make this property more valuable than it would seem. 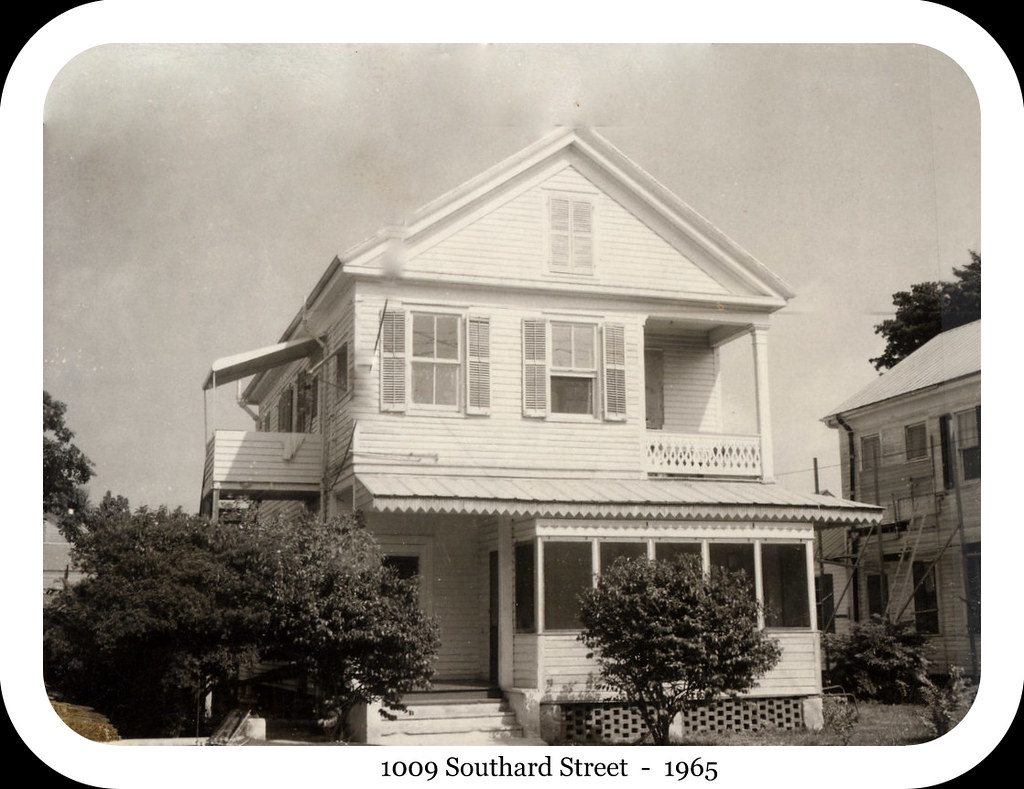 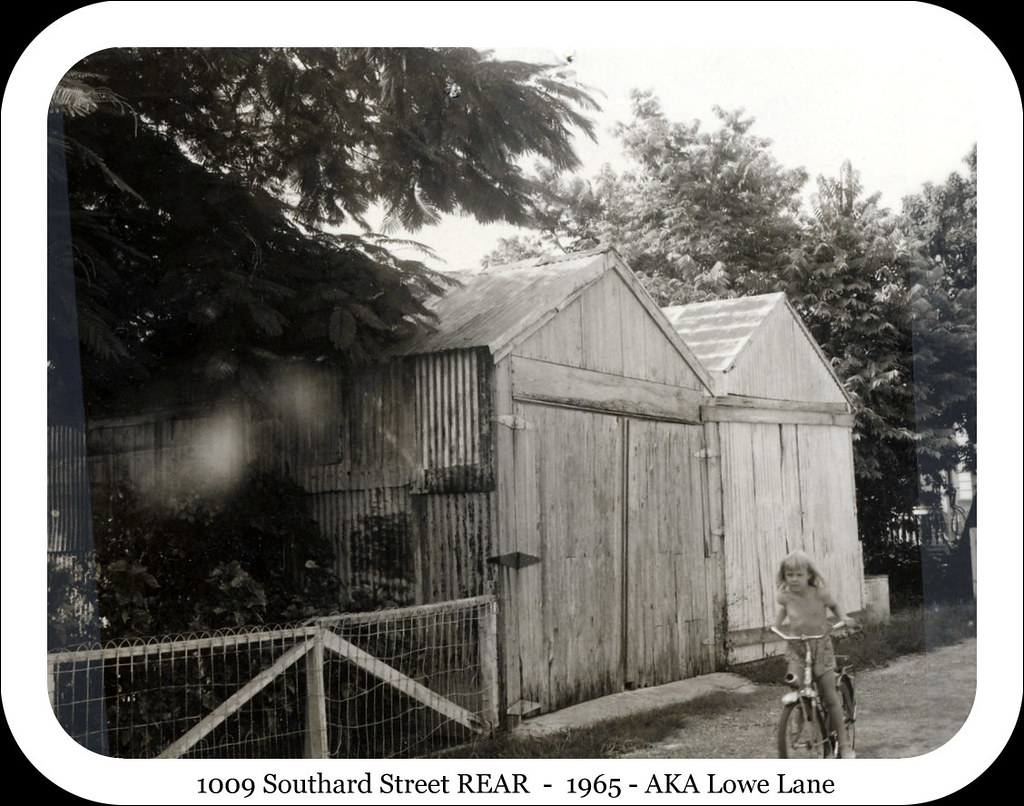 The 1965 photo shows us how much the house changed since even then. The screens were removed opening the first floor front porch. A second level porch was added. An existing covered second floor porch was enclosed which expanded the original second floor living space. A separate second level porch extends outward with a stairway that leads down toward the back of the house. (That stairway flow now leads toward the front of the property.) This shows us that the original single family Conch house was already made into at least two living units: one up and one down with separate entrances. That still exists today. But there is more. 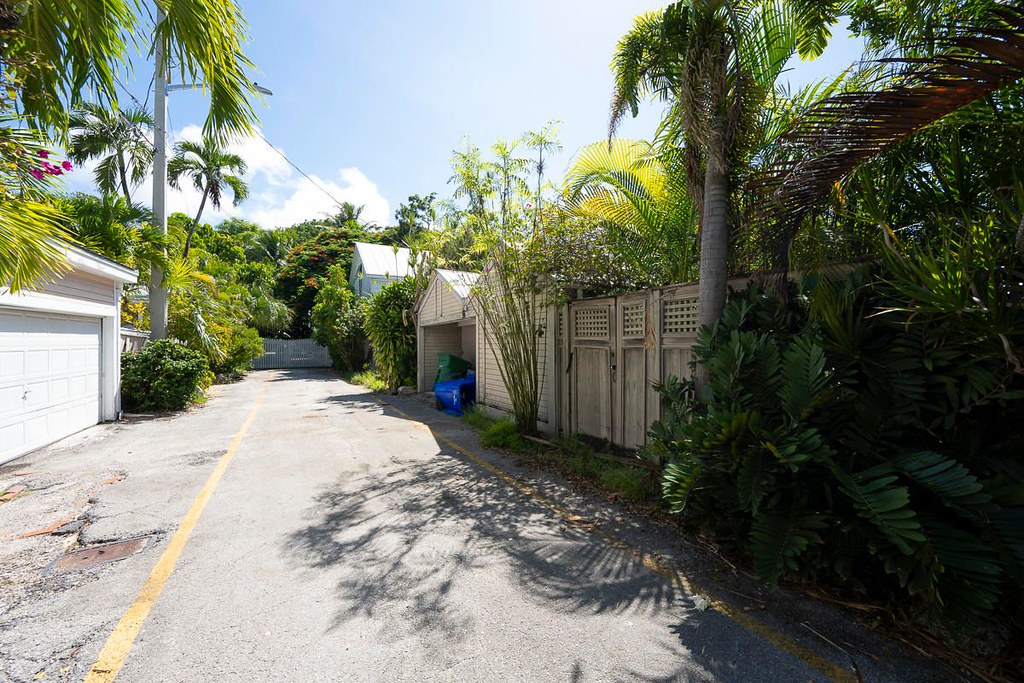 The above photos show the legal existing bedroom and bath in present day rear cottage and garage. You; will see interior later. I checked the Historic Sanborn Fire Maps which show that 1009 Southard Street existed at least as of 1889. The garage appeared on the 1892 map. This irregular rectangle lot is 6,944 Sq FT and measures 136 Ft long and 52 Ft wide at the rear. That is huge in Old Town and explains why the east side yard is so expansive and is the present day entry garden into this lovely property. 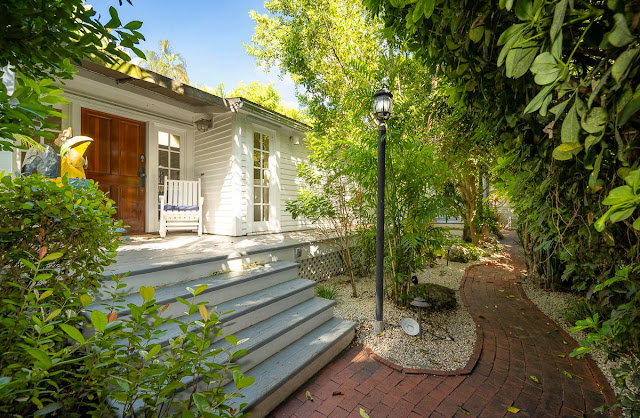 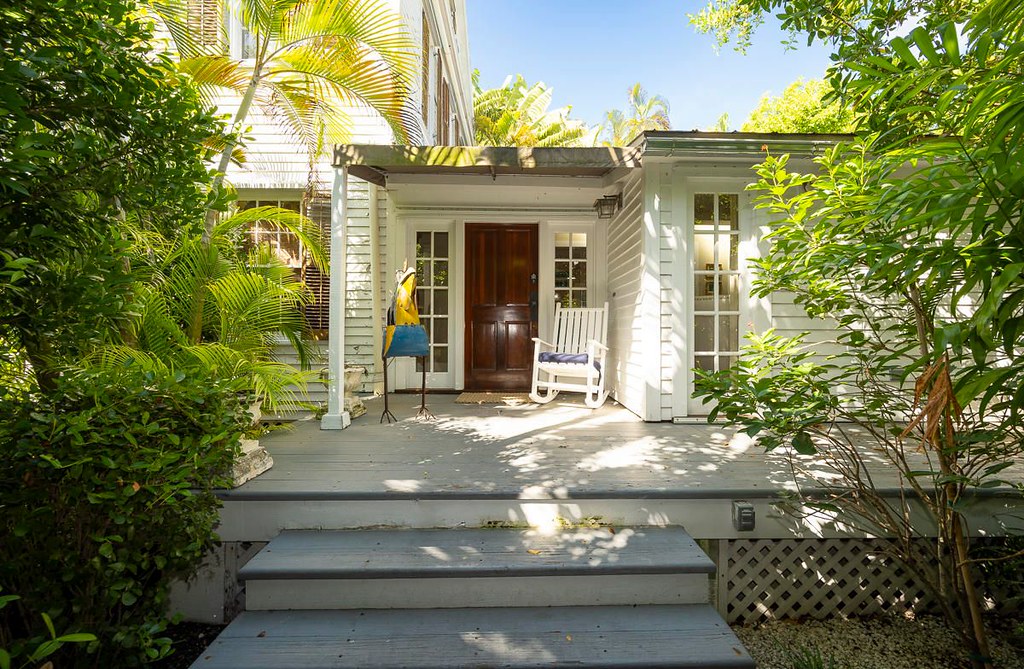 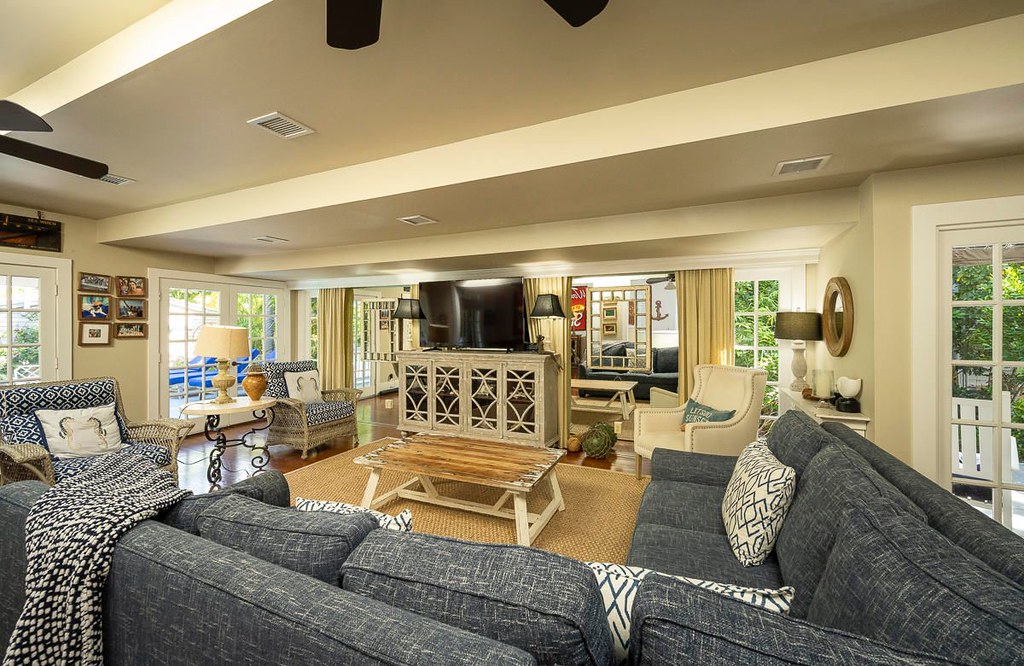 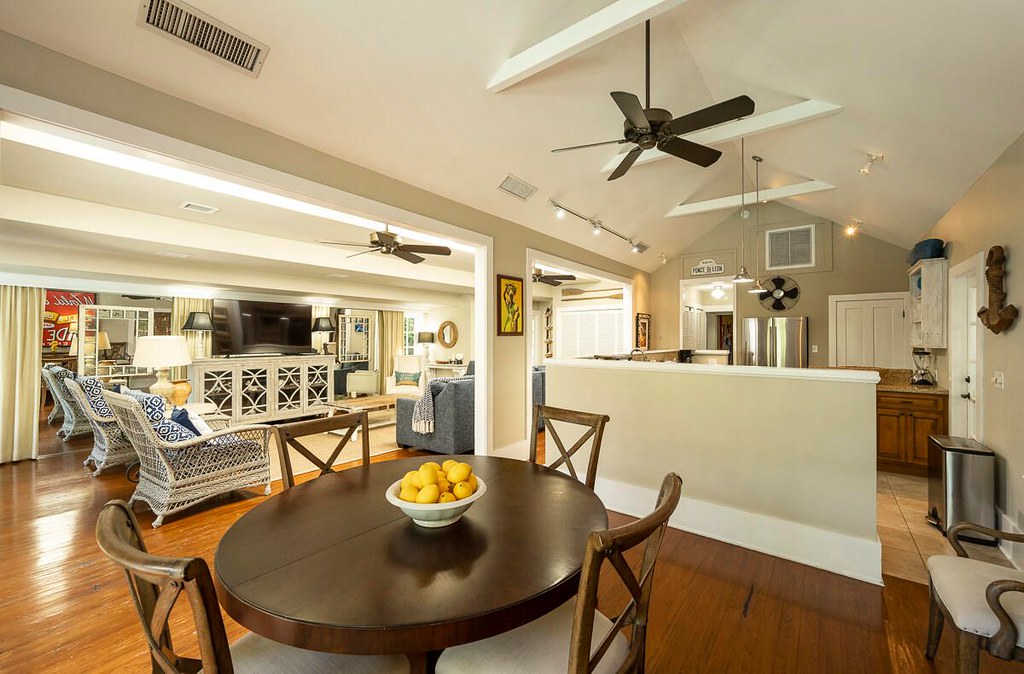 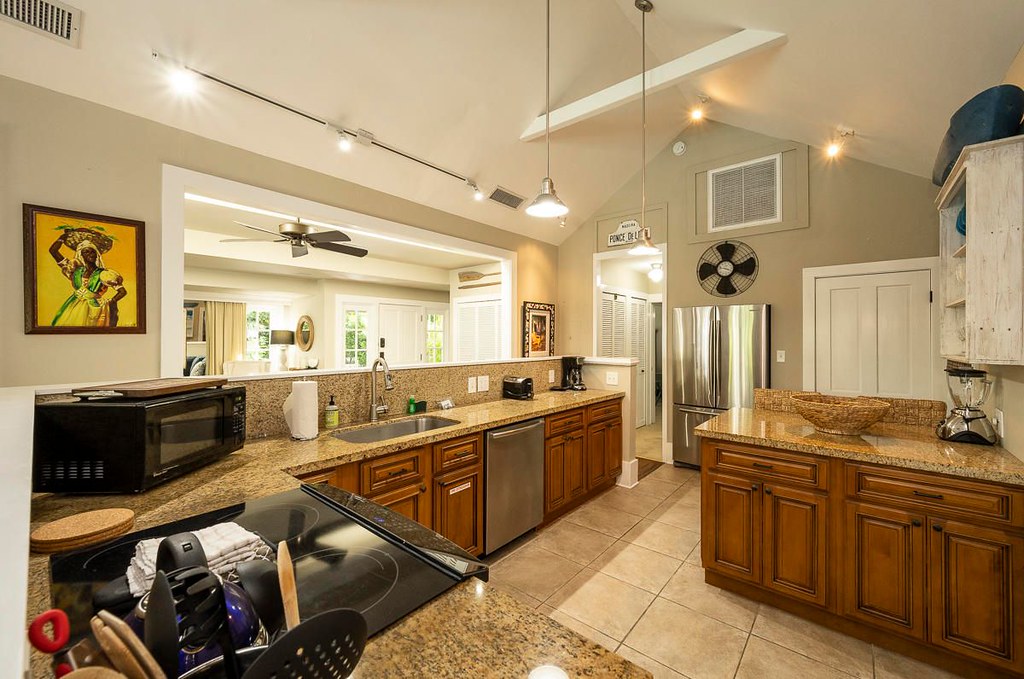 Not into the two distant past a separate pool on the east side was removed and the space became the garden and formal entry into the downstairs living area.  I think the renovations were done in the 1980s or early 1990s as they reflect the colors and some of fixtures used then. Others are more current but the unification of the gabled cottage with a lower angled roof in the living suggests that to me. We will see an exterior view later. 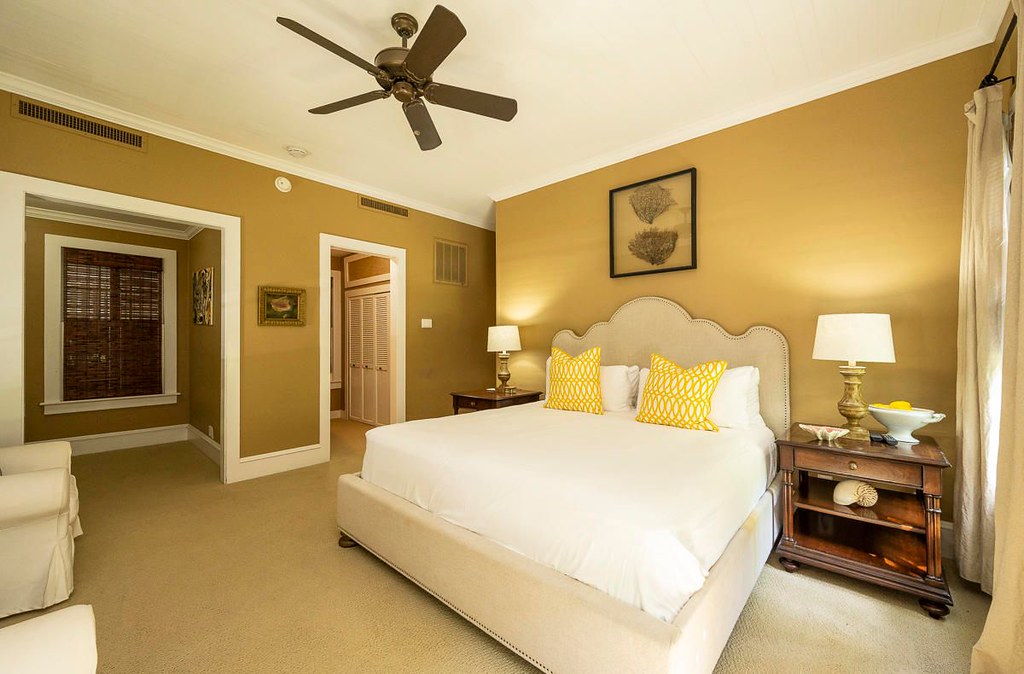 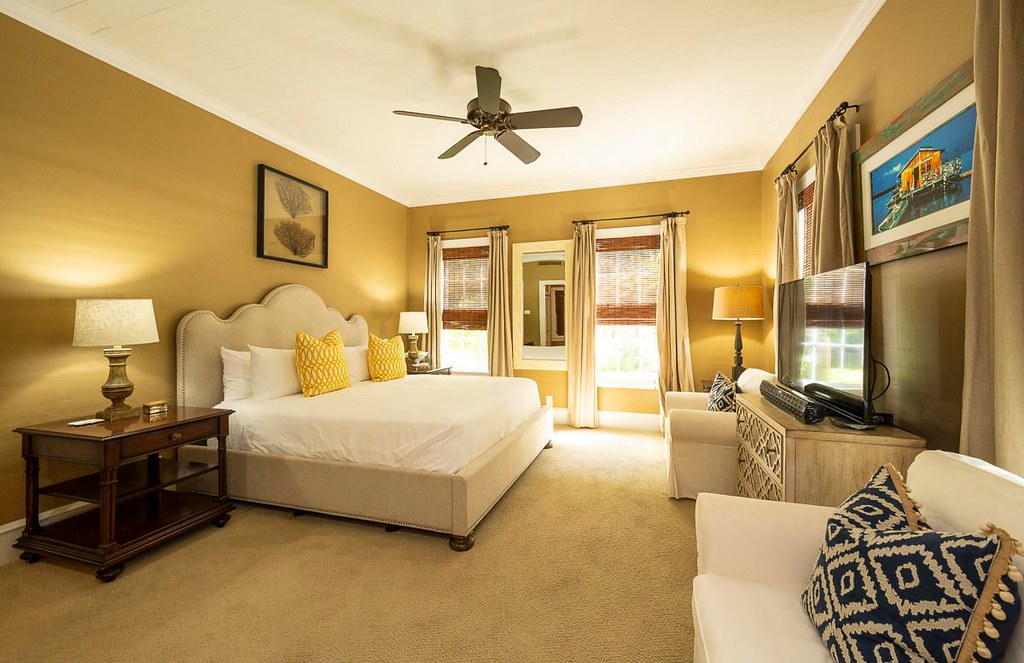 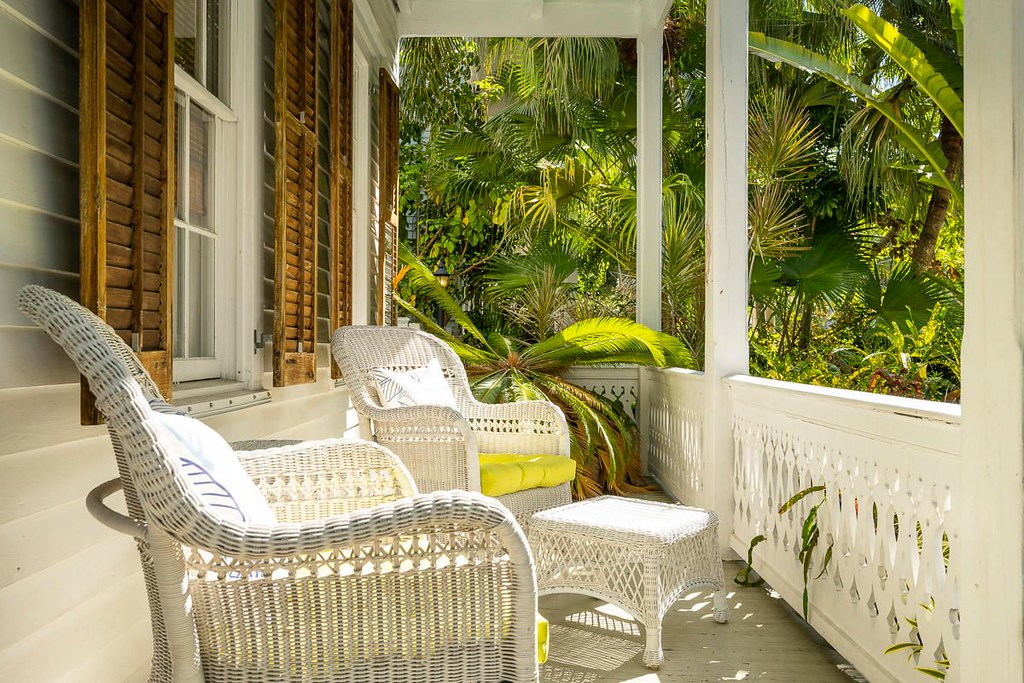 The master bedroom of the first floor unit is so comfortable. It actually made me feel like I was inside a luxury hotel room. The front porch is for sitting only as the formal entry is on the side. Look at the shutters. They appear to original to the house and are functional. They may be cypress wood. Not sure but I suspect they are as that was common years ago. Also seen are current metal plates to which metal panels are affixed to get wind storm insurance credits. 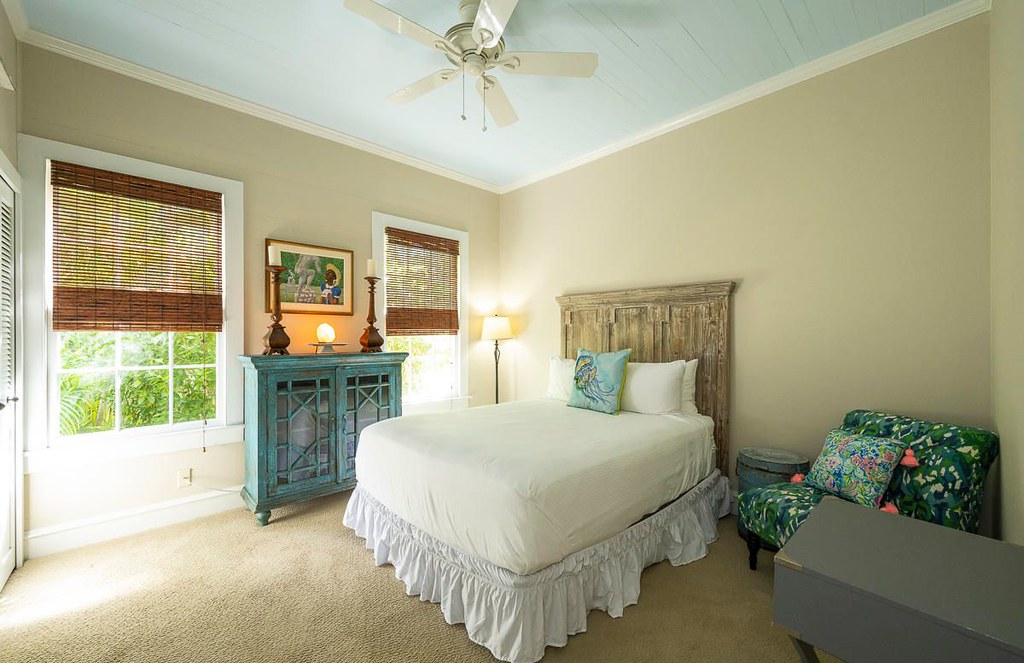 The second floor apartment enters from the west side of the house and has three bedrooms (front shown in above photo) plus two more on the third floor. There is an internal unit stair to those units. I checked and there is no view of the pool from the second or third floor. The present owner rented that apartment for $3,035 per month. Vacant now. 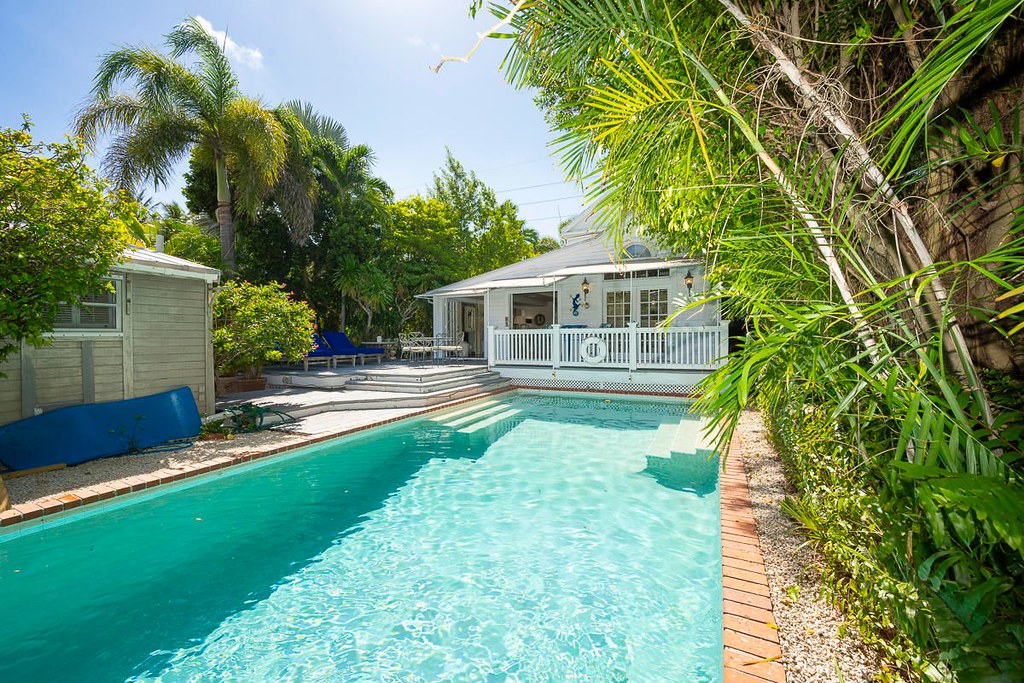 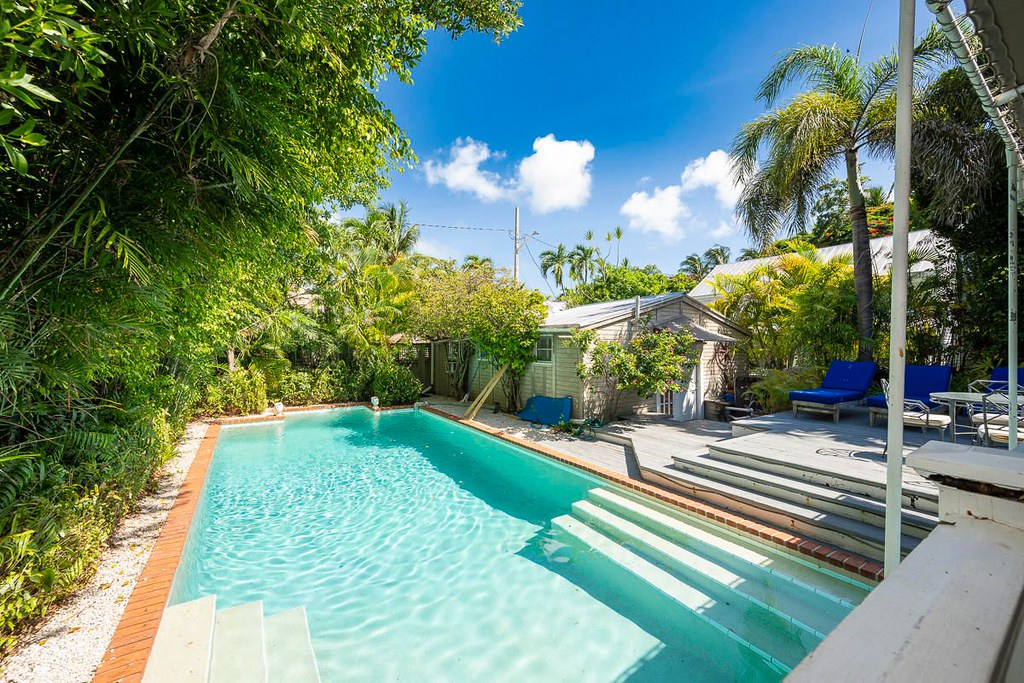 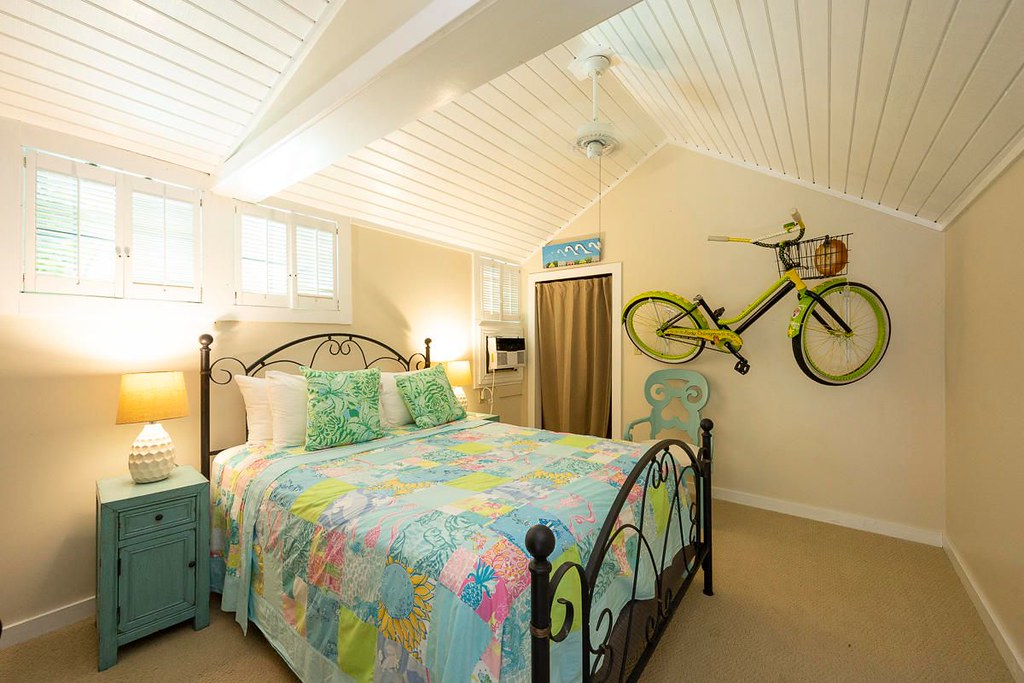 The pool photos show the rear renovation where the current downstairs living, dining, and kitchen are located. That spaces has two bedrooms and two baths. The photos also show huge decks with sunny views but no privacy invasions by abutting houses. The one time garage is now one bedroom guest bedroom with private bath. The other side is still a garage. That space is a legal bedroom which if rented annually should bring in $1200 to $1500 per month.

I have seen so many of the homes on Southard Street benefit from renovation over the years. This is one house that might benefit from a new renovation or conversion into a single family house. It really has so many potential possibilities. CLICK HERE to view the Key West MLS datasheet and more listing photos. Offered for sale at $2,799,000. Then please call me, Gary Thomas, 305-766-2642, to schedule a private showing. I am a full time Realtor and buyers agent at Preferred Properties Key West. 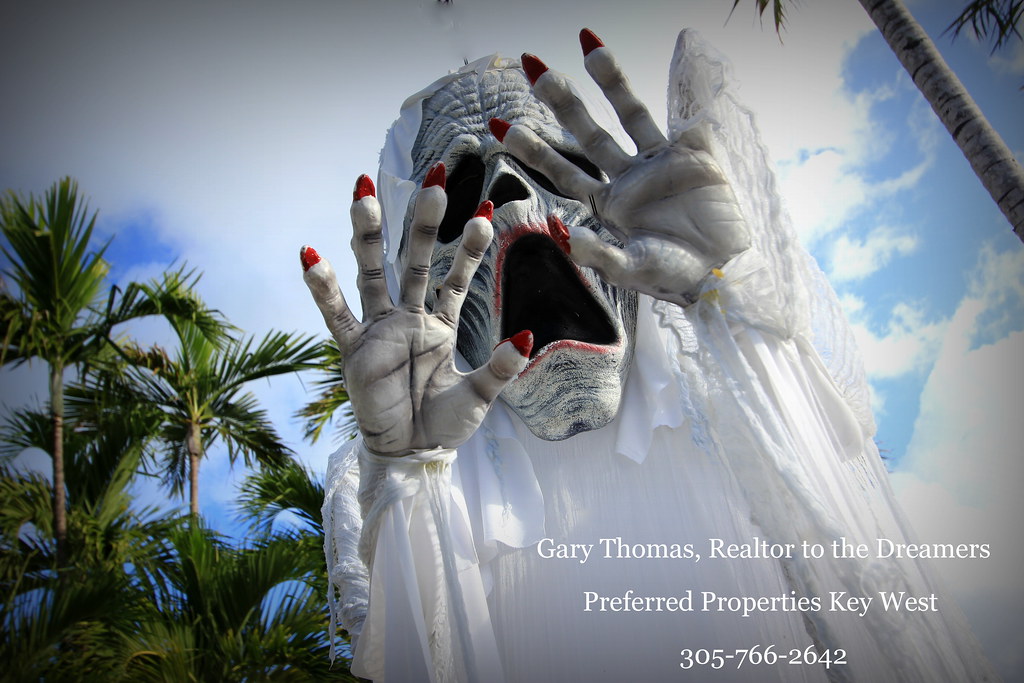 You really bring these old homes to life with your histories.  I really enjoyed reading about this one.  Thank you.

Hello Gary - that's one of the many interesting things about real estate in that we can see the changes in a property over the years under different ownership as it passes along to a new occupant.  And sometimes we can even participate.  And then there are those homes who seem to never(or rarely) turn over - often revealing a time capsule or many stories to tell. . .

Michael, The neighboring house to the west on Lowe Lane used to belong to Pres. George W. Bush's chief of staff Joshus Bolten.  Much smaller lot - about half the size of 1009 but unique in its own. The former Vice Chairman of Aol Time Warner owned the house acorss the street several years ago when it was the feature story in Architecural Digest. Good neighbors make help drive up long term property values.