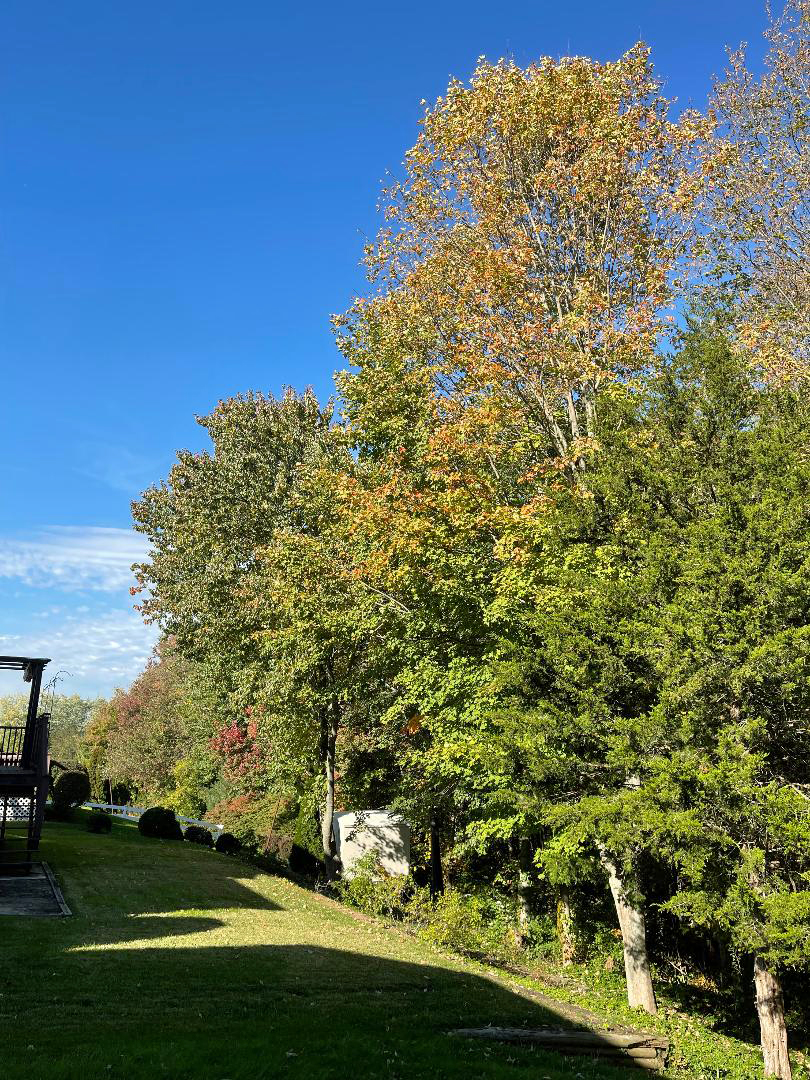 The first picture below for this year's Progression Of Fall Colors series was taken just as the colors were starting to change and there wasn't much color yet.  By the second picture a week later we can begin to see a more definitive change in the colors.  This week the change in colors is more obvious as you can see in the picture above and third picture below.  Also in the third picture you can start to see some of the trees losing their leaves.  I would expect to see a much more noticeable change by next week in both the color and the amount of leaves the trees have lost.

As I have done for the last eight years, I will continue to post pictures of this same spot at different points throughout the Fall to show the progression of the Fall colors.  Fall is a beautiful time of the year in New England, and even though the last couple of years have been better than the previous years, they still have not been what I had hoped for.  I have become spoiled by the beautiful colors we normally see during the Fall, so I am hoping this year the colors are truly outstanding.  My favorite colors are the trees with yellow, orange, and rust color leafs when they blend together.

Anyone planning to come to New England to enjoy our Fall colors at their peak, should plan on coming between the last two weeks in October to the beginning of November.  However, the trees seem to be turning color later than normal this year, I normally would have posted my first blog this year in this series at least a week earlier, but the change in color started later than normal.  It is still to early to get a feel for what the colors will be like this year, but we are starting to get a better indication of what they will be like. Still looking green. The Fall Blast is not Past! Looking for the full array. Jeff 😎

Hi George- I love your series but have a question. Are you going to rake all of those leaves????

George Souto The colors are slow changing this year. I think it is the weather poor trees are somewhat confused here where I live. I love this series that you write . I always know Fall is here when I see your posts . Looking forward to the next one .

As we headed down towards Los Angeles this morning, I saw a lot of leaves turning the same color has the ones you shared.  I am looking forward to your next post.  A

Hello George,  While seeing the contrast happening I am surprised at how long the transformation is taking.  You saw one of my posts with the change there and gone in about 2 weeks.  Look forward to the next shot.  Enjoy your weekend.  Mark

Hi George - to Kathy Streib 's question  Are you raking or blowing those leaves?

I see some red coming in down below.  I was going to say last week looked like more color than this week until I saw the red coming in, haha.

Good morning, George... those leaves are certainly taking their time changing colors this year, it seems.

We are still lagging behind in having our trees begin to color, George.  I suspect it won't be long however.  We got a good rain in the past 24 hours.  The first we've seen since last spring.

The tree in front of my house is losing its leaves, too, George. I know because I swept up a lot of them earlier this week to make sure they made it into the recycling pick-up last Thursday.

Time is marching on, but like others said it seems to me the color change is slower this year.

George,  your colors need a little help.  Throw some bright dye at them

Hi George Souto - I enjoy seeing the change of season in your blog post because it starts preparing me for the change in Sedona.  Well, this year it is changing fast!  My Japanese Maple is already turning red.