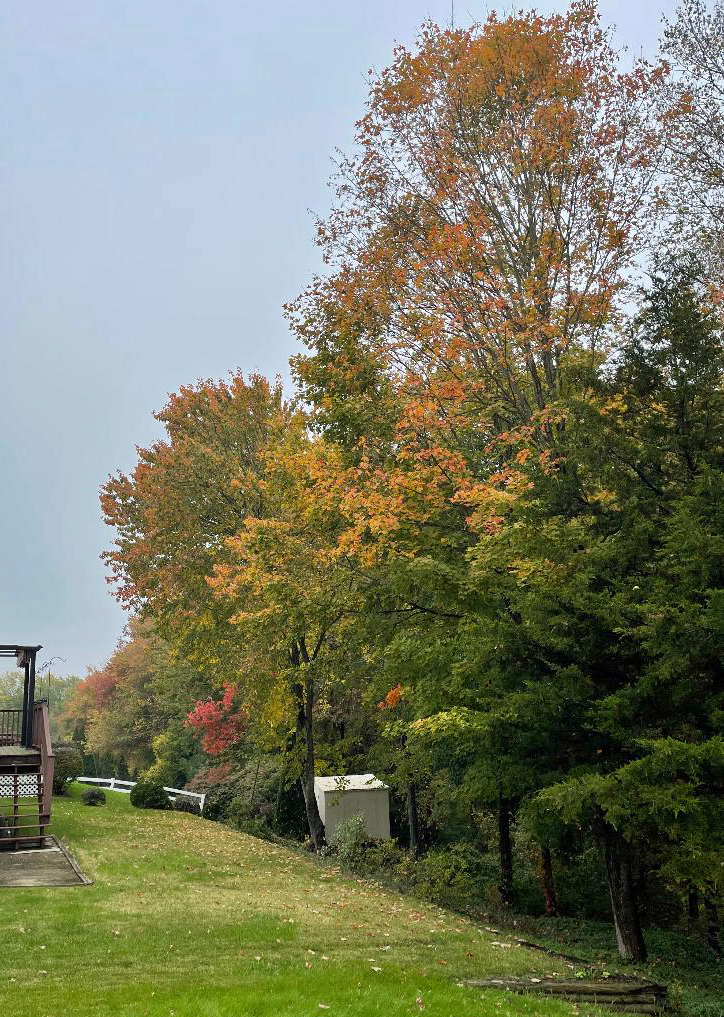 The first picture below for this year's Progression Of Fall Colors series was taken just as the colors were starting to change and there wasn't much color yet.  By the second picture a week later we can begin to see a more definitive change in the colors.  Last week the change in colors were more obvious as you can see in the  third picture below.  Also in the third picture you can start to see some of the trees losing their leaves. This week the picture above, and fourth picture below, were taken less than a week from the previous one.  However, the color change is more significant than the week before.  The colors are changing quicker now, so I will most likely post another blog in a few days.  Also we are supposed to get significant rain and wind today and tomorrow, so there is a good possibility many of the leaves will be blown off the trees.

As I have done for the last eight years, I will continue to post pictures of this same spot at different points throughout the Fall to show the progression of the Fall colors.  Fall is a beautiful time of the year in New England, and even though the last couple of years have been better than the previous years, they still have not been what I had hoped for.  I have become spoiled by the beautiful colors we normally see during the Fall, so I am hoping this year the colors are truly outstanding.  My favorite colors are the trees with yellow, orange, and rust color leaves when they blend together.

Anyone planning to come to New England to enjoy our Fall colors at their peak, should plan on coming between the last two weeks in October to the beginning of November.  However, the trees seem to be turning color later than normal this year, I normally would have posted my first blog this year in this series at least a week earlier, but the change in color started later than normal.  We are about half way through the change in colors, and are now starting to get a good idea of what the colors will be like this year. Hello, George Souto; your photos brought back beautiful memories of when I was living in New England (Boston).  We frequently hopped in the car and drove for hours to inhale the stunning beauty of Fall foliage. It was my favorite time of the year. Thank you for sharing!

Hi George- I love seeing the changing colors of the leaves. It looks like some at the top may have fallen.

Goerge my friend always love your progressions... and sadly it comes to an end too quickly... now with that said I had no idea Aura Alex  lived in Boston, MA what years? I wonder if we were there at the same time Endre

Hello, Endre Barath, Jr.; I lived in Boston from 1974 to 1986 and witnessed the most extraordinary celebration of the 200th year of this Great country we lived in on July 4th, 1976! If I saw you during that time, I probably couldn't tell the difference if it was you or Neil Diamond.  All foreigners looked alike (to me)! 😄

Good morning, George... big changes in just one week... and I suspect next week they will be even more noticeable.

The progression is so cool to see and the colors are certainly coming out now, so vibrant.

Hey there George! I must make it a bucket list to spend a fall in an area where you actually see the seasons change like that

HI George Souto - We are starting to really see the change happening!  Thank you for sharing this.  I am looking forward to the progression.

When I was out and about yesterday, I noticed that Sacramento leaves are also beginning to color.  We lag behind you folks in New England.

George Souto  The colors do seem to be slow but pretty same thing here . I am worried that one day they will just be gone

Love to see the change of the season and the colors of the leaves. Just spectacular display of nature!

George Souto - I like that you always have something to look forward to come Fall. Your annual fall progression of colors is very enjoyable.

Hi George - I'm a bit behind on keeping up with your Fall Colors this year.  It was starting to look like fall in this photo!  And I'll jump ahead to see what Nov 8th brings!