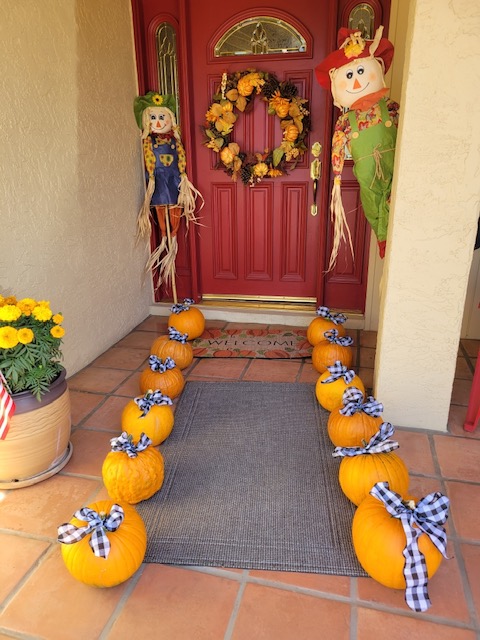 Phoenix is a fabulous place to be during the fall season!  The weather is perfect, the sun is shining and it's fun to see the fall decorations all around town.  Truth be told, I secretly pull out a few fall decorations in early September just to get the party started!

And speaking of parties we held our annual Oktoberfest party last Saturday.  As luck would have it the lovely Carol Williams was staying with us and the two of us had a blast shopping for a few decorations and getting the decorations in place. On Friday we stopped at Trader Joe's to buy pumpkins for every family that would be attending.   What fun that was! Carol picked out a bunch and I picked out the rest. We ended up with two shopping carts full of pumpkins!

On Saturday I showed Carol what I like to do with the pumpkins, which is line them up at the front door, kind of like a 3 dimensional welcome mat!  Carol, who's never tied bows before was quite perplexed on how to POOF those ribbons up and  make them look pretty. She tried a time or two, with not much success. We both decided she could be the pumpkin holder and I'd tie the bows.  We had a bunch of laughs trying to accomplish that feat! Nothing better than team work to get a job done (and have fun too)! Our guests arrived bearing a dish to share as well as a bottle of wine or their favorite beer.  I had made up a Spicy Beef Chili and Chicken Veggie Chowder the previous day. Everyone enjoyed a beverage and some appetizers outside. And then the fun began playing corn hole!  We typically play bocce ball but thought it would be fun to shake it up a bit this year.  And it was fun watching the antics people used to win (or not)!!! Next up was the main course of Chili and Chowder!  Everybody loved it as well as a few salads and tiramisu for desert.  Then it was time to chill and relax and spend time catching  up with each other on a beautiful Phoenix evening! On the way out, every family could chose the pumpkin of their choice to bring home and enjoy.  Good ole Bob decided just what he could do with two pumpkins!! And of course it brought laughs and smiles all the way around! Happy Fall Everyone!  And don't forget to enter your fall post into the....

October Challenge- Help Us FALL In Love With Your Area!

Hi Kat Palmiotti it was a blast!  And you know, it always is :) Such fun people! We are what you'd call 'party hosts' to the max.   It's what we do and have for so many years :)

Hi Dorie Dillard Austin TX it's even more delightful this year as we had to skip last year.  Everyone so appeciates the parties even more so now!   It was a real treat to have Miss Carol Williams here at the same time. She is such a dear heart  and so much fun to have around.....easy going and laid back!

Thanks Sharon Tara!  That is awesome that you feel like you joined th fun!  Maybe some day you can do an epic trip like Carol Williams did and join us!  Carol and Gary deserve the credit for the photos.....I was busy tying bows LOL!

Hi Sharon Kowitz that was my goal to take the stress off the food prep so I could relax and enjoy our guests. We used to have bigger events caterted and that was so easy.  But these days we keep things smaller and everyone brings such interesting dishes!

I had to read this to find out what a poofy pumkin was. Glad the weather is nice, I will be in Phoenix for a conference in the middle of Nov.

Fun pumpkins are my jam even without Oktoberfest but with it, and put it over the top

No wonder you are so happy!!  Will you adopt me?  I am in Love with your area!!!

Thank you for sharing such a lovely time.

Take care, be safe and enjoy the colors of the season.

Hi Matt Brady aren't you happy you know now what poofy pumpkins are!  Who knew before the other day!  LOL   Have a great time at your conference in PHX!

Hi Laura Cerrano it was a blast - as usual!

Hi Debra Leisek sure why not!  Come on down and join the Phoenix fun!

Hi Roy Kelley I am enjoying the 'fall' colors Phoenix Style!  Probably 85 is the high today so all the flowers are starting to bloom again and it's beautiful.   Enjoy the falls season too

Great story and great photos, Anna Banana Kruchten CRS, CRB, Phoenix Broker. And, it looks like a great time was had by all.

Anna just wanted to stop in and find out what you are doing for Thanksgiving, Endre

Hi John Juarez it was a fun party! And now we're on to planning all the holiday activities starting with Thanksgiving in a few weeks.  Can you believe it...it's almost Thanksgiving.

Hi Endre Barath, Jr. you planning on coming to AZ for Thanksgiving?   You and Diane are invited to join our dinner plans!

Somehow I missed this but what fun you must have had. Love the decorations. How cool that this coincided with Carol's visit!

Hi Jeff Dowler, CRS it was great that Carol Williams would be on her way back home during the time our annual event goes on.  It was a lot of fun!

Anna, The raccoons in our neighborhood had a field day with our Halloween pumpkins  sad to say 🙁

Hi Paul S. Henderson, REALTOR®, CRS I'm sure they do have a field day with pumpkins!  Thankfully our pumpkins were taken home by our guests so we didn't have to worry about critters coming down off the preserve - like Coyotees etc.