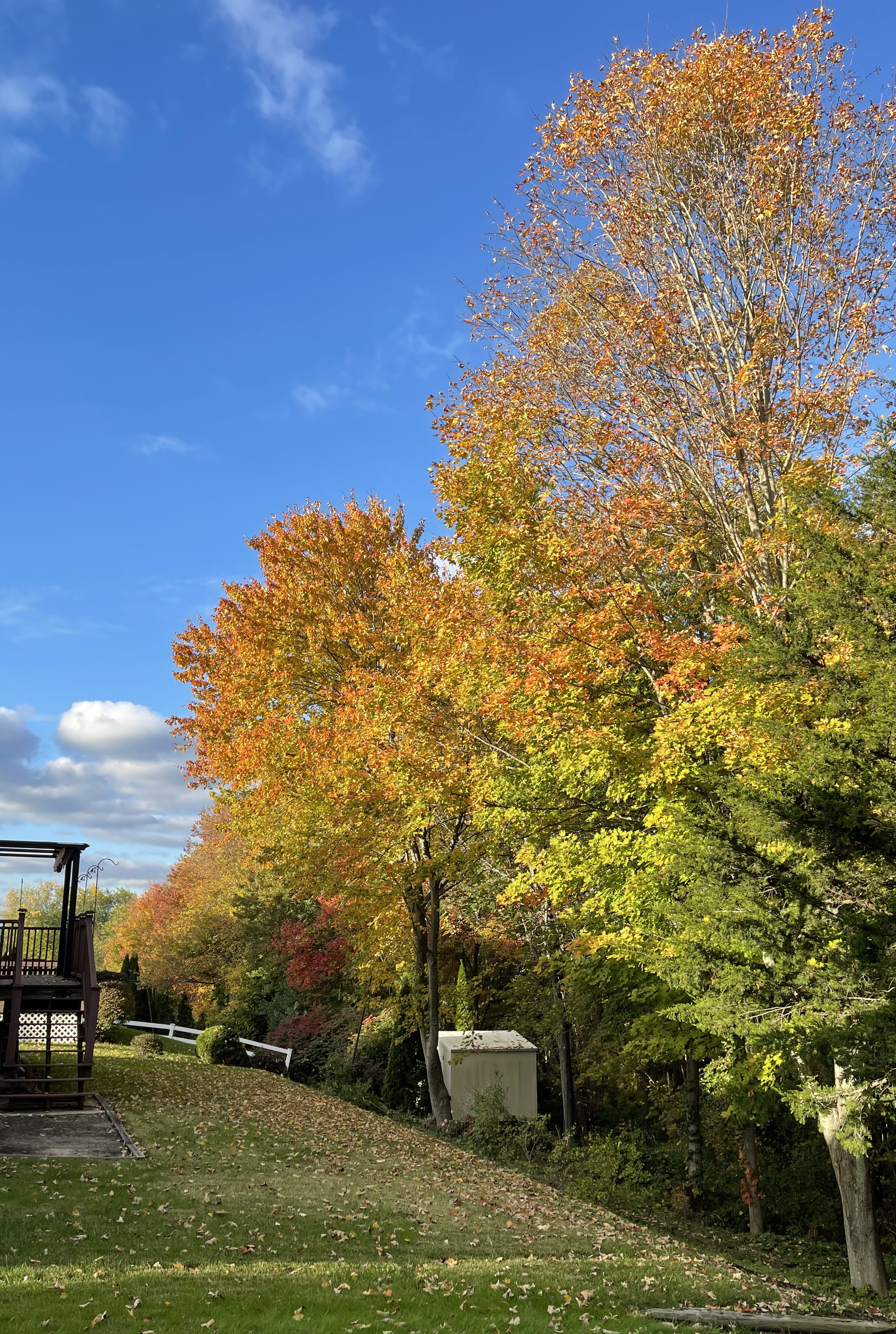 The first picture below for this year's Progression Of Fall Colors series was taken just as the colors were starting to change and there wasn't much color yet.  By the second picture a week later we can begin to see a more definitive change in the colors.  The third week the change in colors were more obvious as you can see in the  third picture below.  Also in the third picture you can start to see some of the trees losing their leaves. Last week (the fourth picture below) were taken less than a week from the previous one.  However, the color change was more significant than the week before. This week we have reached what I would consider the peak of out change in colors.  The fifth picture below was taken only four days from the forth picture.  As you can see the colors are changing very quickly now, and within the next two weeks all these trees will have lost almost all of their leaves.

As I have done for the last eight years, I will continue to post pictures of this same spot at different points throughout the Fall to show the progression of the Fall colors.  Fall is a beautiful time of the year in New England, and even though the last couple of years have been better than the previous years, but they still had not been what I had hoped for.  However, this year the colors have returned to what I was hoping for.  I have become spoiled by the beautiful colors we normally see during the Fall, so I am happy with the colors this year.  My favorite colors are the trees with yellow, orange, and rust color leaves when they blend together, and I have gotten that this year.

Anyone planning to come to New England to enjoy our Fall colors at their peak, should plan on coming between the last two weeks in October to the beginning of November.  However, the trees seem to be turning color later than normal this year, I normally would have posted my first blog this year in this series at least a week earlier, but the change in color started later than normal.  We have now reached our peak, and soon our change in color will be over, but for the meantime I will enjoy it for as long as it lasts. George I always look forward to your progression photos and I have had in the back of my mind a post for the past seven years to spoof on yours so when things settle down be on the lookout for my progression photo blog post:)Endre

Hello George - you are very fortunate.  Such beautiful colors so close to your home.

So, my girlfriend and I went up to Upstate NY last week. We fully expected (in late Oct) for the leaves to have already fallen. We were surprised by the late fall colors, it was simply beautiful!

Such amazing and vibrant colors, I love seeing the progression.  All of the leaves will eventually change from green, right?  Or, will there still be a small group of green leaves to accentuate the other colors?

Brian the tree that is still green is an evergreen, so it will be green all year round, but all the others will lose their leaves very soon.  Most likely within the next two weeks.

I love the idea of progression photos because it definitely makes the changes easy to see. Beautiful colors!

Transition really showing itself now, with the leaves thinning as well as showing off their colors.  Mark

What a great series of photos you shared as the colors have progressed.  Thank you for the lovely Autumn show. A

George Souto - the season of change in foilage is mighty beautiful and evokes so much inspiration and beauty.

The colors are becoming more vibrant and beautiful each day during your progression of colors, George.

HI George Souto - So beautiful.  It is always a little bitter-sweet to see the peak color because you know that from that point forward many of the leaves will be dropping very soon. Happy Thursday!

Good morning George -  that is ditto the trees in our yard now.  We have a big Canadian Maple.

Hi George! BOY, what glorious colors! Funny but, I remember Lisa Von Domek and I walking and driving around Boston 3 years ago and I was just in awe of the colors on display there. Ours pale in comparison to yours!

I unintentionally came back to thi beautiful set of photos and I'm still humbled by the beauty!

I'm following the fall colors here in Maryland as well.  I don't think we're at peak yet.

George, almost all the leaves in my yard are on the grass so I don't have to look up to take a photo

Love it George!  By the 5th it was really turning beautiful colors!

The progression of leaf colors is pretty amazing and it's fun to see in your photo series. We have some color changes but nothing like New England.