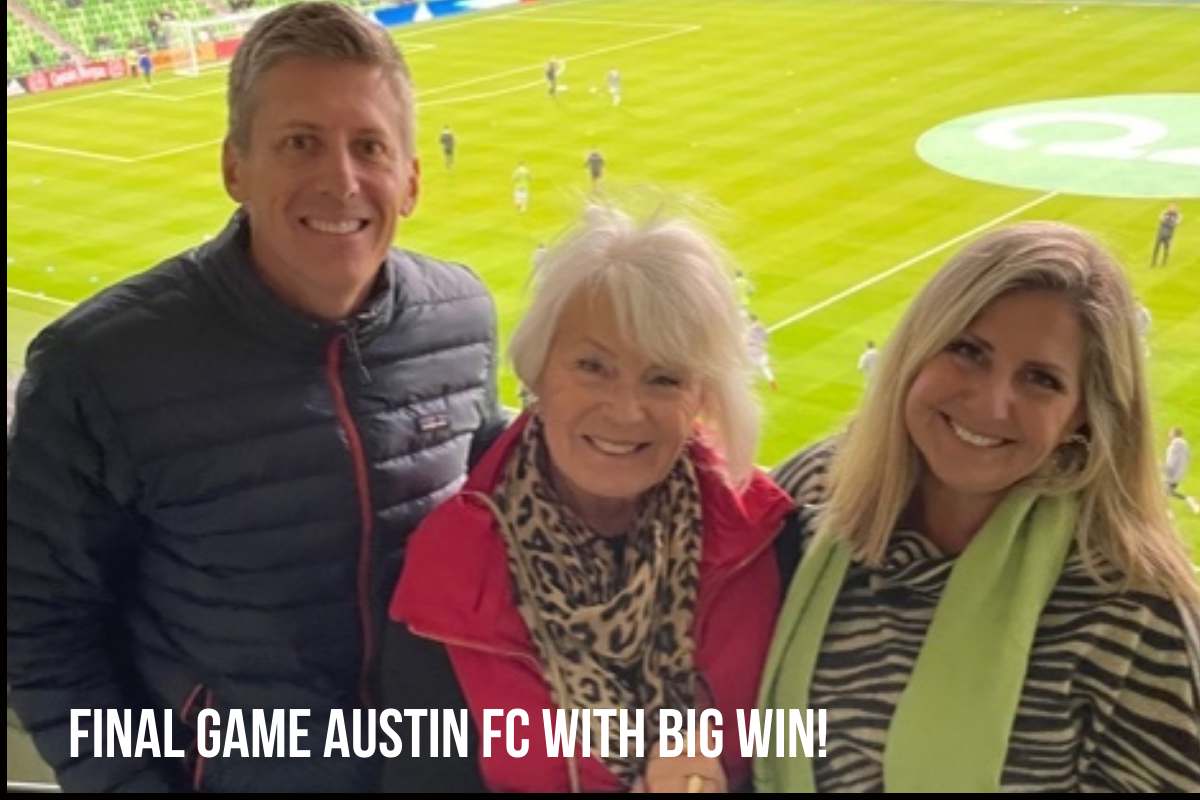 Wednesday night, November 4th after a windy, cold, rainy day in Austin the Q2 Stadium (a soccer-specific stadium located in North Austin) came alive with roaring fans! The stadium is the home of Austin FC, a Major League Soccer team that began playing in 2021. From the very first game Austin welcomed them with open arms, hearts and cheers that would make any team proud! It wasn’t the greatest season of wins, but Austin LOVES soccer and in years to come one can only guess how well our team will perform. A big thank you to Independence Title for the invite to their suite to enjoy the last game of the season. What a spectacular way to end the season with a big win over Kansas City! Austin FC mid fielder, Diego Fagundez became the second youngest player in MLS history to reach 50 goals and 50 assists with his performance against Kansas City with his two assists!

There is no doubt in a city of legends, something new is rising! Go Austin FC!

That's wonderful that you have a new soccer team in Austin. I'll bet it does great!

Hi Dorie - looks like Austin is quite the Soccer city.  I have not followed it unless my grandson gets involved then I will.  Although his father is a lover of ice hockey.

My grandscon is playing soccer and so is my granddaughter in Austin Grant Schneider . Its an exciting sport and I was in awe of our Austin team!

I have never been much of a soccer fan but I think it might be fun to watch a professional soccer match.

The fans were wild Brian England . So mush enthusiasm!!

It is just here in the US that people are not fans of soccer.  Any other part of the globe and it is all they think and talk about.

I agree Ed Silva! Austin is wild about the game and willing to support the team and momentum is growing in kids soccer's leagues!

Congrats to Austin, such a fun time for fans.  We have aclub out here, not the same level called the Phoenix Rising.  We have to start somewhere I guess.   We made it to Saturday, sit back relax, chill.  Monday is coming.  Thanks again for the post, and enjoy the weekend. Bill Hi Bill Salvatore - YVP Blog ..You are right you have to start somewhere and Austin is embracing soccer with much enthusiasm!

Sounds like a fun evening with a great pic to remember it by.  Enjoy your weekend.  Mark

Hello Dorie - Ed Silva is right.  Alhtough soccer may not have the same appeal in our country as elsewhere, its popularity won't be disputed by the enthusiastic fans around the globe.  It looks like you had a nice family time celebrating the win and the team's first season in Austin.

It was an awesome evening..Austin is wild about our new professional soccer team Michael Jacobs!

Hi Dorie, Looks like a wonderful time hope you enjoyed it and thanks for sharing.

Hi Tony Busanich ..it was so much fun!

Good Morning,Dorie Dillard Austin TX ...  looks like a lot of new sports fans coming your way in Austin... it is so nice to see your "Game Faces" on ... and this time I can see the faces without masks, lol.   Make it a great weekend.

Hi Dan Hopper ..You are so right it was so nice to have our "Game Faces On!"

You happy faces tell all, I am sure you enjoyed every minute of the game.  Wishing you a wonderful rest of the weekend. A

Hi Dorie- I've watched the young ones play soccer over the years and watched it on television but I don't think I've been to a live match!!!  Looks like you were all having fun.

Dorie soccer is the most popular sport around the world is is really catching on in the US.